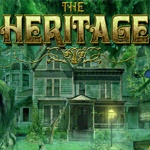 The Heritage opens in 1916, as a young woman seeking escape from the death and destruction of the First World War flees to her grandfather’s old, abandoned mansion. Villagers living nearby whisper dark tales of insanity, but she’s not frightened; after all, what could be worse than the horrors of war? But as she quickly discovers, sometimes the villagers know best.

Soon after arriving at the crumbling manor with her infant daughter, the young heroine discovers a “memory locket” through which she is told the story of her grandfather and his three wives. It’s not an especially pleasant tale, fraught with jealousy, grief, madness and murder, but after the disappearance of her baby she desperately follows it to the bitter end, where she makes a strange and shocking discovery about the true nature of her heritage.

The game put me on edge right from the start, and not in a good way. The narration in the otherwise unremarkable opening video sequence was fast and muffled, as if being read into a cheap PC microphone by someone who hadn’t been given enough time to practice her lines. The quality of the hidden object scenes that followed didn’t do anything to boost my optimism, as blocky graphics and murky colors gave the game the appearance of being much older than it actually is and worse, often made the hidden objects very difficult to pick out without help.

Rather than conventional hidden objects, levels in The Heritage are filled with the broken pieces of various items, so instead of searching for a spinning wheel, as an example, you’ll need to find the four pieces of a wheel and two pieces of a spindle to put it all together. In the place of written descriptions for objects, an image of each piece is displayed along the bottom of the scene, providing a visual guide to the hidden parts. Each object, once assembled, is used in its scene to reveal another object, usually by placing it in an appropriate location indicated by an “invisible silhouette” but sometimes through other, more interactive means, such as using a brush to clean dust off a wall or a lantern to light a dark corner. It’s not exactly a world-changing twist on the genre, but it’s a nice little change-up.

The object searches can be quite challenging in spots, but as mentioned, that’s sometimes due more to the muddy visuals than to the cleverness of the developers. I don’t want to overrate my hidden object skills (although they are pretty awesome) but I have no doubt that this game would be considerably less difficult if the graphics were sharper and more well-defined. As it is, I found myself using the help option, a conventional system that points out a single random object and then slowly recharges, far more often than I’m used to.

As in so many other games, The Heritage includes a variety of puzzles that pop up now and then between hidden object scenes and while a couple are fairly decent – the “follow the flashing pattern” puzzle that requires just one round to complete is a nice touch – the bulk of them tend to fall flat. Most are fairly common and simple affairs, gussied up to fit the motif of the game, but a few are rather obtuse. Fortunately, for those without the patience or inclination to bother with them, they can all be skipped without penalty.

The Heritage has all the standard hidden object bases covered, but it never manages to rise above mediocrity and occasionally, such as during the narration at the beginning and end of the game, slips well below it. Graphics, sound and gameplay are all average at best and although the story starts strong and builds a good head of intrigue, it tails off in a hurry and ends in a tangled, nonsensical mess. The game also suffers from at least one glaring technical issue: Volume settings for music and sound effects don’t work properly, reverting to their default levels as soon as the player exits the volume screen.

All in all, The Heritage isn’t a complete train wreck, it’s just not very good. There’s enough meat on the bone to keep players occupied for a few hours, but it sure isn’t the most memorable time you’ll ever spend with a hidden object game. There are just so many other, better hidden object games on the market that unless you’ve already finished every single entry on your “Must Play” list, I really don’t see any reason to spend much time with this one.