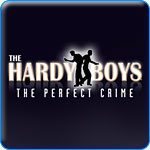 Leaping from the printed page to your computer screen, The Hardy Boys: The Hidden Theft puts you in the role of the sleuthing siblings Frank and Joe Hardy. And while the franchise has decades of teen-aged crime-solving under its belt, this video game adaptation ends up playing like an almost entirely generic point-and-click adventure. It has a few good ideas, but unfortunately they’re all underdeveloped. This is a game for the fans only.

Kicking off with a slightly confusing comic-book style introduction, The Hidden Theft follows the titular brothers as they attempt to catch the thief behind a $200 million robbery. Of course, as expected, the case is much larger than it first seems. Eventually the scene shifts from the boys’ hometown to New York City, and as the plot thickens, the boys begin to link the crime to a specific point in their past. It’s a lengthy adventure, and though most of the twists are fairly predictable, it’s still enjoyable. It’s based loosely on the novel The Tower Treasure, though the two stories aren’t identical.

Things play out like a traditional point-and-click adventure: you can move your character around the environment, scour for clues and usable items, and question other characters for information. There is a lot of talking in the game, and though the voice acting isn’t terrible (and features Disney channel stars Jesse McCartney and Cody Linley as the two brothers) the dialog can be trying at times. Particularly the banter between Frank and Joe, which runs the gamut from mildly amusing to downright annoying. It’s also a bit disjointed at times, as characters will seem to answer unasked questions randomly. It doesn’t happen very often but it is jarring to hear.

You’ll acquire lots of items throughout the game, some of which will serve as evidence, while the rest can be used to solve puzzles. Some of these puzzles are fairly straightforward, such as finding the right tool for the right job, while others are needlessly convoluted. These confusing puzzles happen much more then they should and will force you to resort to trial-and-error, using every item in your inventory in an attempt to find the solution. This leads to quite a few frustrating moments that drag down the entire experience.

The one unique gameplay element that The Hidden Theft introduces is the ability to switch between the two main characters at any point. This comes in handy for a few puzzles, which take advantage of each Hardy’s unique skills. For example, early on the two will have to split up in order to sneak past their mother and get a hold of their motorcycle keys. The problem is these puzzles are few and far between. And the character switching also has a negative effect on character movement. Far too often the boys will walk into each other and simply stop, forcing you to re-click where you want them to go, which usually takes several tries.

But the story and gameplay aren’t the only generic aspects of the game, as the visuals are also painfully bland. The backgrounds are simple and devoid of much detail and, frustratingly, many of the items you’ll have to find are very tough to distinguish from the rest of the environment. The characters fair slightly better, though some have very odd proportions and all animate awkwardly.

While The Hidden Theft presents some interesting ideas, it ends up as little more than a forgettable, generic adventure. Really, the Hardy Boys license is the game’s only redeeming factor. For fans of the crime-solving duo The Hidden Theft might be worth a look, but for everyone else, there are plenty of other, much better, point-and-click adventures available.