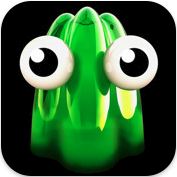 In Pudding Panic you’re charged with protecting a blob of gelatin dessert in a ghost car riding along a track in a haunted house. You need to safely guide him through different rooms, scaring away bad guys and moving track interchanges around to move through each level. It’s all very tongue in cheek, though I suppose that’s obvious since you spend your time making sure a quivering pile of Jello makes it out alive.

It’s all very much inspired by the haunted houses you’d find at theme parks or town fairs. The car you ride in is clearly part of an attraction, and the rail isn’t far off the mark either. The house is filled with archetypal haunted characters like witches, skeletons, evil jack in the boxes, etc. They’re not really even attacking you, just trying to scare you away.

The car with Pudding in it always moves forward and turns right when he gets to intersections. You’ll have different intersection crossings at the ready that you can drag and drop onto the screen to change the direction the car will go to collect power ups, hit levers and reach the end of each level. You’ll have some goofy weapons as your disposal to help you on your way, mostly scaring the baddies before they can scare you. For instance there’s a snake horn that you can blow that flies out of the front.

The game starts with one world unlocked, and if you want to unlock later worlds you need to do more than just beat all the levels. Each level has one ticket somewhere on it that you can grab. Grab enough and you’ll open up later worlds. It’s a nice reason to go back to completed levels, since otherwise once you beat the level there’s not much reason to go back. But with 48 levels (and more promised) there’s a lot to work through.

The only real complaint is that, with the exception of grabbing the tickets (which you sometimes have to go back for), there’s really no reason to go back and replay levels. It’s a small complaint since there’s so many levels shipping with it, but replayability is always worth mentioning.

My wife commented to me that Pudding Panic doesn’t really include any kind of pudding in it at all, being that the title character is made out of gelatin. I’m kind of hoping that maybe the term pudding means something else overseas. While an inaccurate title though, Pudding Panic delivers where it counts, which is in the fun department.