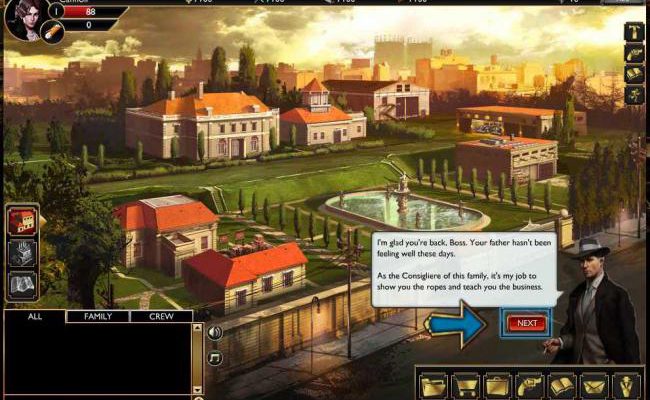 Never go against the family

The real don has finally arrived on Facebook, and he’s brought the Five Families with him. Kabam offers a sitdown with the cosa nostra in The Godfather: Five Families in hopes of making social gamers an offer they can’t refuse.

The Godfather: Five Familes is another hybrid strategy game, one that takes great inspiration from games like The Stratagems and other Kabam games like Global Warfare. You’ll fill the role of an up-and-coming mob boss (choosing either a male or female character) tasked with revitalizing a family who’s in a bit of a slump. As a strategy adventure, there’s ample depth, but Five Families also does a bang-up job of being accessible to all types of gamers.

You’ll begin the game with an estate that’s in disrepair. You’ll need to construct resource buildings, restaurants, and a hideout, as well as train thugs to battle opposing street gangs. Your estate houses structures such as a library where you’ll research “rackets” (trafficking, muscle, and other illegal activities) and an armory, a place to unlock new weapons and protection for your gangs.

Gameplay is fairly deep, but keeping track of your emerging empire is very straightforward. Your consigliere (right-hand man) will keep you up to speed on every move you need to make as part of one of the Five Families (chosen at the beginning of the game), though you can also tackle missions in whatever order you choose. At the outset, you’ll spend the bulk of your time building structures, upgrading buildings, and researching “better ways of running the family business.” However, you’ll also get ample opportunities to butt heads with other hoodlums on the streets of the city.

Similar to other strategy games on Facebook, combat is mostly a matter of intelligence. You’ll need to first scope out an area using a courier, finding out just how much muscle a particular gang possesses, and then send in enough troops to do the job right. Gear you’ve unlocked and/or stripped off of rivals can be equipped to your gang, adding extra damage and/or defense. 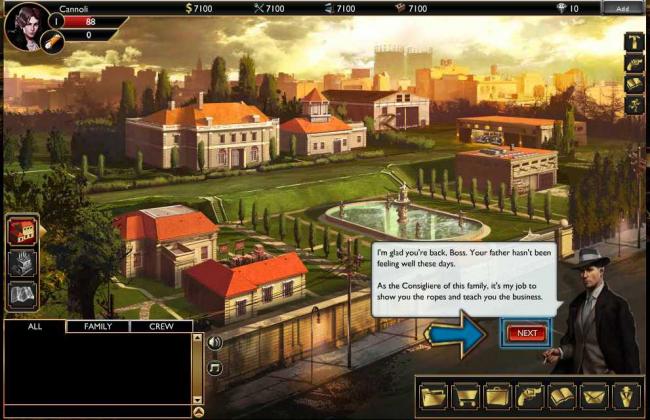 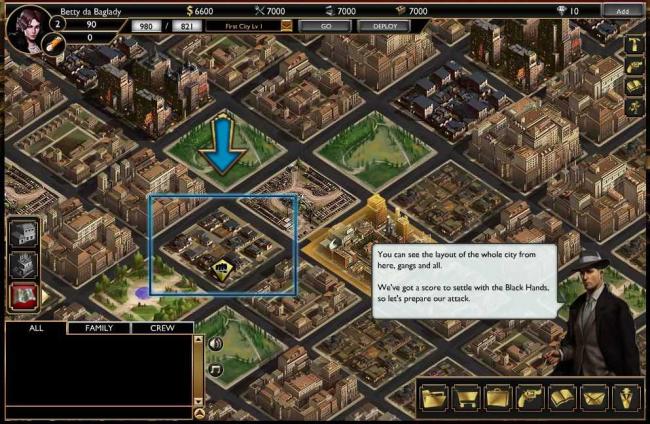 In the early parts of the Five Families, there’s definitely a lot of busy work, and though the game makes a good first impression, it can sometimes feel like a chore. That is, of course, until you’re set free from protection and let completely loose onto the streets. All your efforts won’t be in vein, and Five Families‘ main focus is on the multiplayer experience.

During the few days the game prevents you from being attacked by opponent players, you’ll want to find a crew to roll with and start building up your own little stake in the Family. The social elements are fun and make for a perfect fit for the story the game is based upon.

In terms of presentation, The Godfather: Five Families isn’t incredibly active, but it’s still a lovely game with tons of polish. The all-too-familiar Godfather themes make an excellent backdrop for the laidback nature of the gameplay, and the visual style has a soft, oil-painted quality that offers tasteful animations in small doses. The interface is pretty much everything you could want out of a game like this – no hassle, easy to navigate, and pretty to look at.

The Godfather: Five Families is somewhat slow-paced and tedious at the outset, and its options for strategic gameplay are pared down a bit when compared to its contemporaries in the genre. However, its approachability and polish, matched with strong social features, make this an enjoyable adventure that’s also mildly addictive.