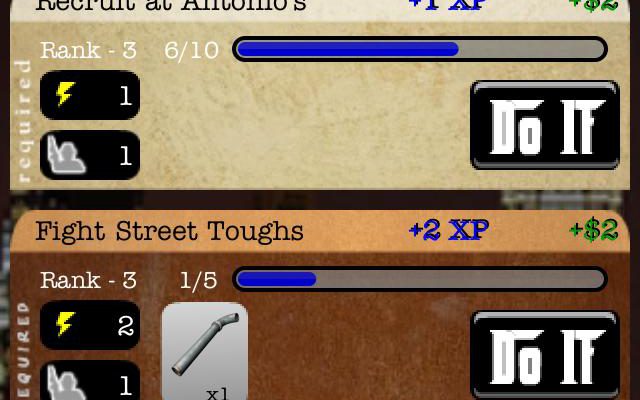 The Godfather Empire blends social mafia gameplay with a famous film franchise, but meets with only mediocre results.

While movies and video games have often had a rocky relationship, some films and game genres seem to go hand in hand. Take the upcoming Angry Birds Rio, for example. Or the Back to the Future adventure games. With that in mind, combining The Godfather and a Mafia Wars style experience sounds like a match made in heaven. Much to our disappointment, the social mob experience hasn’t aged nearly as gracefully as the film.

Gameplay here will be largely familiar to anyone who has ever played a social RPG before, whether we’re talking Mafia Wars, Gangster City, or Castle Age. Players will be given a set amount of energy that they will spend completing missions, which in turn will earn them experience that will level them up and open up more missions. Completing missions requires little more than click a button, making this a largely menu-driven affair. 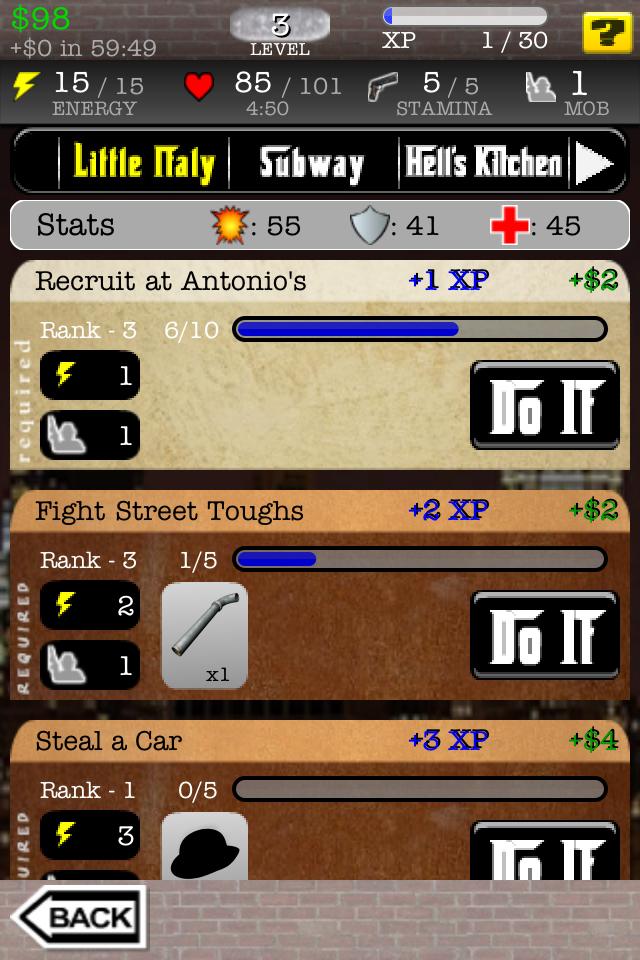 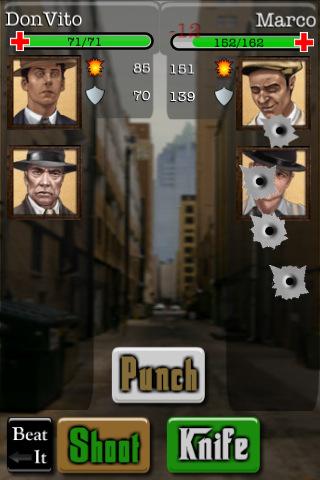 The same can be said for the genre’s other elements as well. Players will meet and recruit fictional characters to join their mob, purchase items to beef up stats and meet missions requirements, and square off against other real world players and their fictional mobs in a combat mode that The Godfather Empire calls “Vendetta.” All of this is more or less exclusively done through menus.

While almost everything in The Godfather Empire feels cut and paste from other games in the genre, combat has a neat “rock, paper, scissors” twist that helped to set this one apart from the crowd. Players will need to select from a punch, a kick, or a gun shot. Punches beat gun shots, gun shots beat kicks, and kicks beat punches. Both parties will still take and deliver damage each turn, but the greater damage is taken by whoever loses the RPS-style choice game. This continues until one player is finally out of health.

It’s a fairly simple twist on combat, but it does something few games in the genre bother to address – it gives weaker players a chance to stand up against someone whose stats might look a little better on paper.

Asides from the combat though, there is simply nothing unique or original here to speak of. What’s worse, the presentation feels just as low-key and recycled as the gameplay. Picking nice fonts and snazzy visuals for a menu-driven game should be as easy as shaking down a shopkeep for protection money, but instead The Godfather Empire ends up looking like a mob-hit gone wrong. With the exception of a few key elements copying the font from the film’s logo, all of the words are presented in the most generic and dull way possible. And since the game isn’t optimized for the retina display, many of these buttons looks fuzzy on the iPhone 4. 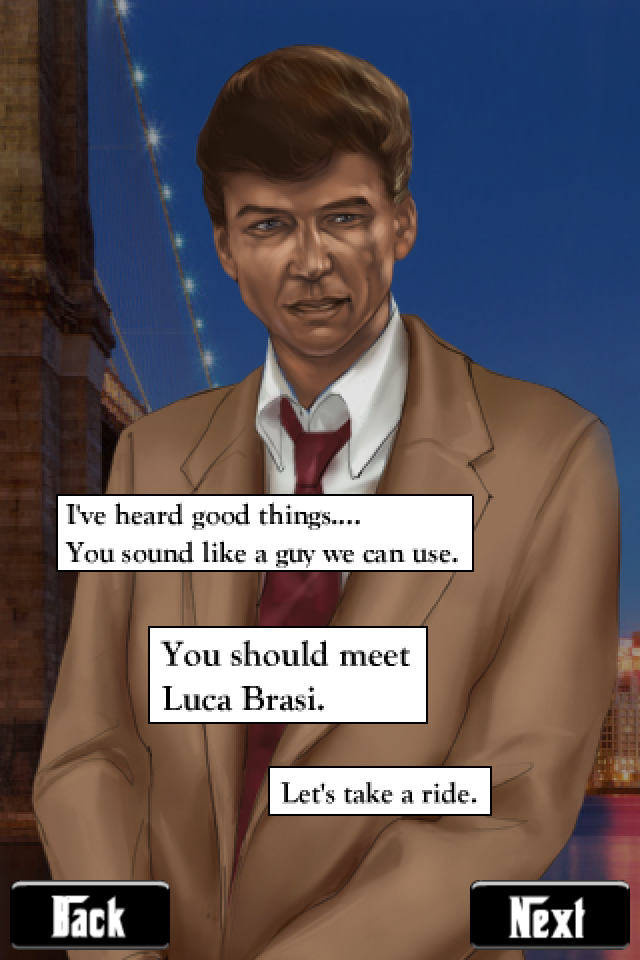 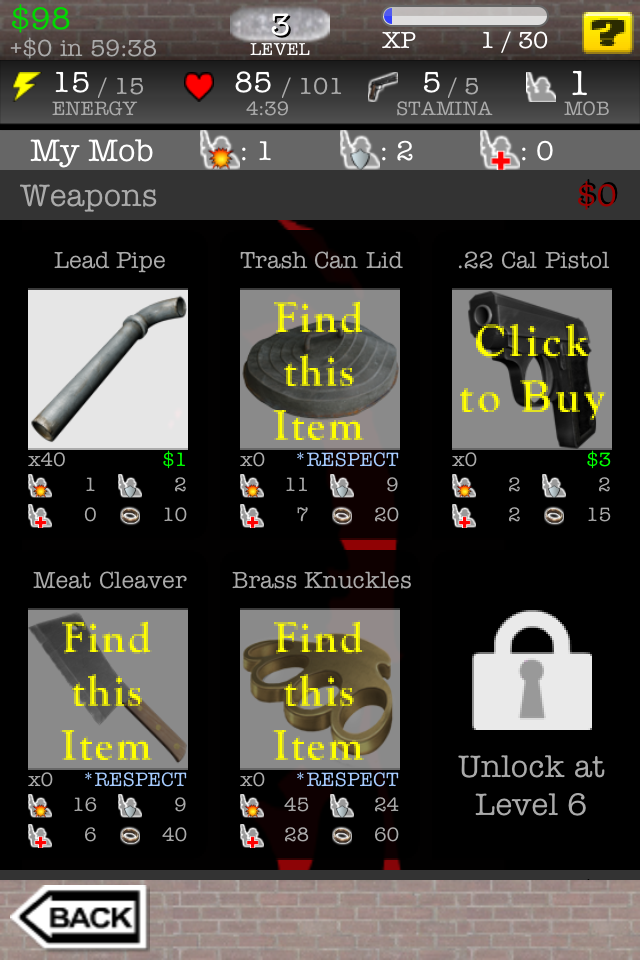 We’ll give The Godfather Empire points for one thing though: rather than simply slapping the movie license on a generic game, they’ve attempted to weave a story featuring many of the main players from The Godfather universe in there. You’ll find yourself interacting with Sal Tessio, Clemenza, and even Luca Brasi before you hit level two. The story itself isn’t good by any stretch (it might even be tough to really call it a story), but they’ve put all the right pieces in the right places to make this feel like it’s a part of the Godfather‘s world. Bonus points for offering some great hand-drawn visuals of the films famous faces to accompany their moments in the game.

Bringing the Godfather license to a Mafia Wars clone is a move that seemingly makes perfect sense, yet having a good license isn’t an excuse to skimp on originality. While The Godfather Empire might appeal to die-hard fans of the series and/or Mafia Wars, the whole package ends up feeling like a dated experience. From sub-par visuals to simple menu choices, The Godfather Empire feels more like a Facebook launch title than a mobile social game in 2011 that’s learned from the thousands of similar games that have come before it. It’s definitely playable, but unless you’re jonesing for yet another menu-based social RPG that doesn’t have the courage to get creative, consider this one an offer you can politely refuse.