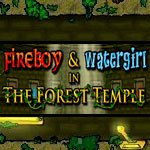 Teamwork is nothing new in video games, but it usually comes in the form of co-operative play with friends or some helpful in-game characters helping you on your quest. The Forest Temple approaches teamwork a little differently, and has you controlling two completely different characters at the same as you try to lead them to the exit in this puzzle platformer.
In The Forest Temple, you’ll control both Fireboy and Watergirl as they collect gems, avoid hazards and make their way safely to the exit. To control both characters, you’ll need to have your hands on two separate spots on the keyboard. Fireboy’s movement is controlled with the arrow keys, while Watergirl is controlled using A, W and D. Each character can move and jump to navigate their way through levels, but can’t do much else.
The levels themselves offer up some rudimentary puzzling. Switching levers will open doors, pushing balls in the right direction can activate switches – that sort of thing. As the game progresses you’ll quickly discover how essential teamwork is to the puzzling process. Fireboy can activate a switch to let Watergirl access a new area, where she in turn can push an object to open a path for Fireboy. Co-operation is the name of the game in The Forest Temple.
The other element that comes into play here is the use of fire and water, or as you’ll likely come to recognize them in the level design , red goop and blue goop. Red goop will kill Watergirl, blue goop will kill Fireboy, and green goop with kill both of them. This means that each character needs to be careful in different sections of a stage – definitely a trick that helps keep you on your toes.
Green was a poor choice for the goop that would kill either of them, as it’s the same color as pretty much everything else in the forest temple. When you see green all around you as completely safe vines and moss, it’s all too easy to forget that the goop isn’t just a perfectly safe patch of grass. It would have made much more sense from a stylistic point of view for the third deadly color to be either yellow (the remaining primary color) or purple (the color that happens when you combine the two). Green just confuses everything.
What wasn’t confusing, however, were the puzzles. The Forest Temple offered up little challenge in its level design, instead opting for a straight-forward platform experience with only hints of puzzling thrown in. That’s not to say we didn’t have fun with The Forest Temple – it’s just that it had the potential to be so much more. There was definitely a good deal of switch throwing and path opening, but we never felt stumped by anything the game offered. More complicated levels just meant more objects and switches to throw. Sometimes you’d need to do these in a specific order, which really just came down to trial and error. The platforming elements and risky goop helped to keep the game more challenging than we’re making it sound, but the puzzling itself just left us wanting more.
The Forest Temple is a unique little puzzle platformer with a great teamwork dynamic that just wasn’t explored as well as it should have been. Including some head-scratching challenges could have made this a game we’d want to come back to over and over again. Despite the ease of the puzzles, the 30 or so levels offered here are a fun way to eat up an early afternoon, and the platforming will definitely keep you on your toes.