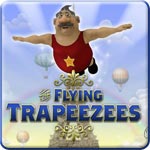 Anyone who’s ever dreamed of running off to join the circus will be right at home in The Flying Trapeezees. A slickly-produced, tongue-in-cheek foray into the world of late 19th century aerial acrobatics, the title proves a relatively engaging way to turn off your brain and unwind.

While fairly simple and repetitive, not to mention unlikely to challenge veteran keyboard jocks, hey… we can confidently say it’s the most fun you’ll have in tights, outside of the odd dance recital.

According to the tale – cleverly told via cartoonish reproductions of vintage silent film clips complete with grainy camera filters – Monsieur Francois and Madame Amélie Trapeezee are two unemployed, down-on-their-luck aerialists. France itself has also fallen into the doldrums, as a wave of depression sweeps the land of wine and cheese.
While reminiscing over the good old days though, the pair discovers a hidden cache containing a handbook of tricks and enchanted map tucked away behind the portrait of trapeze inventor Jules L éotard. Armed with this info, they quickly set off to cheer up the entire nation by performing a series of stunt-laden shows at exotic venues ranging from Nice to Reims, Strasbourg and Mont Saint-Michel.

To the ever-present tune of a superb, period-specific soundtrack, you’ll help the clan with each of these performances. Playable characters, selectable before each stage, include Francois, Amelie, daughter Celeste, grandpa and even a pet monkey. Once chosen, your hero/heroine is shot into the air via cannon, where they can loop, swirl and dive (sorry, no realistic physics modeling here) with a simple wave of the mouse. Slowly descending through the atmosphere – markers and flags chart one’s progress from, say, 300 meters down to 200, 100 and an eventual flamboyant landing – players must aim to collect floating, flying or balloon-mounted gems.

Doing so doesn’t just increase the length of the magic trail that spools out behind you, or entertain the crowd, represented as a row of silhouettes lurking below. It also inspires them, with a minimum level of audience members needing to be cheered up for you to successfully complete each scenario. The trick being that for every gem you collect of a certain color, one viewer’s hat turns the same hue. Left-clicking then produces stunts such as swimming motions, splits, disco moves, and pirouettes, causing members of the group whose chapeaus match your currently active color to cheer and fling their hats in the air. The more bowlers and berets caught, the more you multiply the number of happy fans.

The trouble here being threefold: One, you’re not always give enough gems to convert everyone outright or much height in which to operate. Two, it’s possible to accidentally color rows with multiple shades of hat, as the action’s quite fast-paced and closely-located gems of varying hue can appear out of nowhere at a moment’s notice. Last but not least, viewers easily lose interest and rows must be fully cleared before additional observers arrive, meaning that the odd straggler can ruin an entire performance. Oh, and don’t forget the constant presence of obstacles like moving gems or jewels tied to strings which can be accidentally cut either.

Luckily (and happily for the outing’s replay value), progression rewards you with a constant stream of new bonuses and upgrades. Think props such as hoops, fireworks, bi-planes and additional family members you can catch and swing off of to generate extra stones. Likewise, it’s possible to gain abilities such as the power to sprinkle dust on the crowd that instantly changes their hat colors, or create super gems that inspire more people by making loops around them.

So while we’re not blown away by the hands-on action, which lacks depth and gets tedious over marathon stretches, most scenarios still prove somewhat entertaining and imaginative. More striking are the title’s sense of charisma and dazzling production values, which let you quickly empathize with featured characters and the underlying plot arc.

Obviously a labor of love for its creators, The Flying Trapeezees stands out less for addictive play than pure originality. Minor setbacks aside, however, considering the unique theme and range of challenges, let’s be frank – it’s still the most fun PC owners have had under the virtual big top in ages.