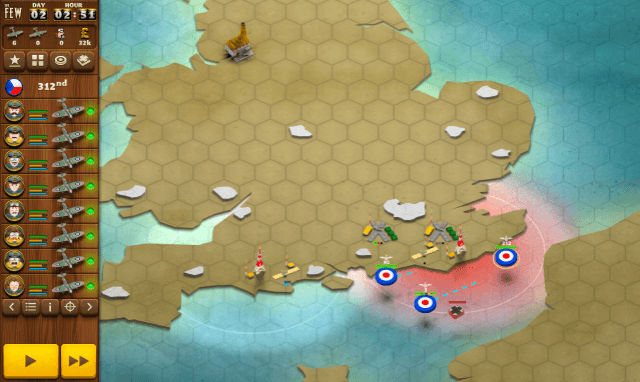 Few instructions, but plenty of thrills.

The Battle of Britain is a thrilling slice of history. An overworked and understaffed Royal Air Force trying desperately to resist the invading Germans and succeeding just, only just, thanks to bravery, stubbornness, and superior engineering. So it’s surprising that there aren’t more games about it. But here’s a new one from Black Moon Design: The Few.

Not that it’s very historical. This is a streamlined real-time strategy game where you must survive the onslaught of the Luftwaffe for 50 days. Most of the game takes place on a hex-map of England, where you buy and build airfields, aeroplanes to park on them, and train pilots to fly them. When you’ve got a squadron ready, you mark out a patrol route for them to try and detect and intercept enemy planes.

When you find the foe, the game switches to a real-time tactical view. Here you dictate pilot routes by dragging them around, trying to take advantage of the inherent aerodynamics and firepower of the different craft to shoot down the enemy planes while taking minimal casualties yourself. Disappointingly, this is only in two dimensions, which immediately makes it feel very arcade like and unrealistic. But it does make it easy to get to grips with.

The game as a whole, however, is a peculiar mixture of affable approachability and bafflingly opaque user interfaces. On the very first screen, the button that says “training” offers nothing of the sort. To get the excellent tutorial, you need to start the main game itself; training allows you to pre-build one-off tactical sky battles and offers no pointers on play whatsoever.

This pattern of the clear and easy sitting alongside the confusing permeates the game. The sidebar to the main map makes it easy to buy and build stuff, and keep a top-level view on your status. But start to drill down and you discover it’s hard to find crucial information like how much experience your pilots are accumulating. There are dangerous-looking buttons with no tooltips scattered everywhere and no manual. The only way to find out how to play properly is to experiment. 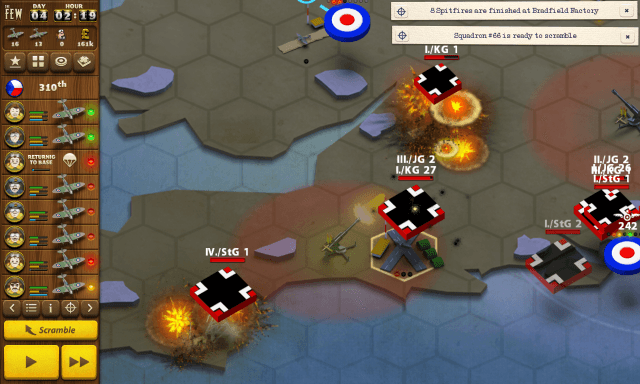 It’s a shame that learning the ropes has been made harder than it should be in a game that’s generally friendly and cheerful, because once you break that barrier the game proves challenging and fun. It doesn’t fall into the trap of many real-time strategy games and makes victory a simple matter of amassing forces and unleashing them at the right moment. If you want to save Britain, you’ll need to work at it.

All your choices impact the game. You’ll soon learn to co-ordinate resting and flying your patrols to ensure you’ve got a good chance of catching enemy bandits, while keeping reserves to scramble for emergencies. You can’t see German squadrons until they’re right on top of you, so you’re operating in a terrifying miasma of uncertainty. Even the radars you’ll build later in the game only indicate enemies in the general area: pinpointing them for the kill is still tough.

Battles are slightly repetitive, but you can still make a difference with your decisions. You need to guide your planes toward the enemy at an angle, which maximises the firepower you can bring to bear while minimizing the amount they can fire back. This means taking into consideration how the squadrons are deployed and the weapon positions on the craft themselves. And if you want to quickly get back to the main, strategic portion of the game, there’s a handy auto-resolve button. 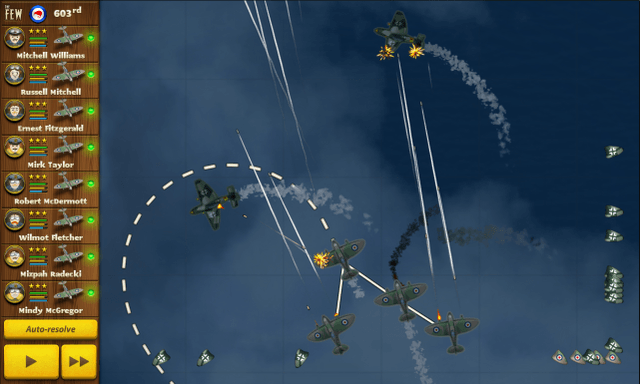 As time passes your pilots gain experience, which makes them better in aerial combat: not just in terms of speed and skill, but they’ll actually make improved decisions without your intervention. And you’ll need them to, as the German squadrons get bigger and more frequent. Winning is a big challenge, and the pressure is relentless.

Yet it has that magical addictive quality that’s such a feature of the best real-time strategy games. One more game-hour and you might earn another pilot star, or build another anti-aircraft battery. There’s always another goal just tantalisingly out of reach. But take your eye off the current situation for too long and the cities you need to protect will be bombed to pieces, reducing your income.

The game looks and feels like it was originally developed for mobile play. That explains some of the oddities of the interface. And if that’s so, the port isn’t quite finished yet, since I uncovered quite a lot of low impact bugs. But it’s perfectly playable if you can put in the effort to uncover all the mechanics. Should you do so, you’ll find a very worthwhile experience, so chock away, and take your place amongst The Few.