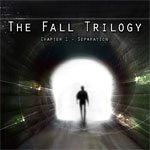 One of the major drawbacks of point-and-click adventure games is that the obtuse puzzles can often be frustrating. It’s easy to get stuck, which can put a damper on the things the genre does well: namely telling great stories with great visuals. With the first chapter in its trilogy The Fall, Kheops Studio attempts to remove much of this frustration and create a game that is more accommodating to new players. And while this makes things a bit too easy at times, The Fall – Chapter 1: Separation is also a solid entry in what looks to be a promising new adventure series.

In this first chapter of the series, the story is intentionally vague. The main character wakes up in some sort of ancient ruin with absolutely no recollection of how he got there or who he is. As he works his way to the exit, solving puzzles in an attempt to escape, the unnamed protagonist will occasionally get flashbacks. The screen will flash white and he’ll remember a brief snippet of his past life. He’ll hear the voices of his son and wife, but even once you’ve completed the game there’s still much he doesn’t know about his life and how he ended up in the middle of a bizarre, forgotten ruin.

What he does know, though, is that he wants to get out. But doing so is no easy task. The various areas of the ruin are loaded with puzzles and traps that have to be solved in order to proceed. In most cases this involves completing some sort of mini-game. You’ll be collecting items, manipulating antiquated but complicated machines, and finding lots of hidden objects. For the most part the puzzles are logical, except in the case of the hidden object sections. But even if you get stuck the game seems to go the extra mile in helping you along.

At all times you have a list of your current tasks at your disposal, which helps keep you on the right track. And if at any point you don’t know how to proceed with a particular task, there is a hint option that slowly recharges after each use. The hints given are straightforward and helpful, and the trickier tasks often have several layers of hints. The game also provides a lot of visual clues, as certain objects will sparkle and glow, making it pretty clear that you should pay attention to them.

Things get even easier when it comes to puzzle solving. These sections also have a recharging hint meter. For some puzzles it actually gives you a hint, such as the location of a particularly tricky hidden object, while others give you the option to skip the puzzle all together with no negative ramifications. Many puzzles also give you the option to select an "easy" mode, which essentially solves part of the puzzle for you. These features help eliminate much of the frustration inherent to the genre, but may also make the game feel a bit too easy for more experienced players.

Separation also shines when it comes to its presentation. The environments are detailed and feature subtle animations that make the world feel really alive, as opposed to the majority of static adventure/hidden-object games. The music and sound design also go a long way towards setting the tone for the game. The soundtrack is soothing and relaxing, and mixes quite well with the subtle, ambient sound effects. All in all it’s a solid presentation that will help keep you immersed in the world.

While the relatively easy level of challenge may turn off some, chapter one of The Fall is definitely a strong all-around package. It looks and sounds great, features a detailed world packed with plenty of mysteries to solve, and ends of a curious cliffhanger that is sure to keep you waiting impatiently for the next game in the series.