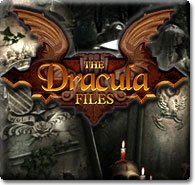 Most of us are familiar with the story of vampire Count Dracula, whether from reading Bram Stoker’s famous book or watching the numerous films based on it. The Dracula Files, a new hidden object game from eGames, puts a modern spin on the tale.

The game starts with a brief synopsis of the climax of Bram Stoker’s Dracula novel, where Dracula is defeated by Jonathan and Mina Harker and vampire hunter Abraham Van Helsing. Years pass, Jonathan and Mina’s descendants move to America, and the current generation of Harkers, siblings Michael and Quinn, doesn’t think Dracula is anything more than a fairytale.

That is, until their parents are killed in a hotel fire and they come across a mysterious note saying that if Dracula should ever rise again, they should contact the Van Helsings. Meanwhile, a friend of Michael and Quinn’s, a reporter named Mark, is investigating the disappearance of tourists in Napa Valley near the Draco Winery, which is run by a mysterious pointy-toothed fellow named Vladimir Draco.

You can no doubt see where the story is going – Dracula has been resurrected, and it’s up to the descendants of the Harkers and Van Helsings to defeat him once again. This is achieved through seek-and-find gameplay, where you’ll comb cluttered scenes trying to find all of the items on a list. Most of the items are random, plus a few key items that are added to your inventory. Most scenes also have a "hidden area" that to discover, and often this area can only be accessed by using the inventory items in some way.

Although the concept of transplanting the Dracula story into the present-day is a creative one, the gameplay doesn’t always hold up its end of things. The biggest complaint is that some of the items to find are indistinct and too small, with a tendency to get obscured in the shadows. Players have unlimited hints that recharge over a relatively short amount of time, but relying too heavily on hints takes the fun away from the search. There are some clever puzzles woven into the hidden object fabric, like having to use a calculator to display the sum of one of the numbers on your list, but these kinds of diversions are too few and far between.

There’s a generous smattering of mini-games that are uneven in their difficulty, ranging from easy to win by trial and error to extremely challenging. All can be skipped. Unfortunately, though, if you get stuck in a certain puzzle and want to reset the board and try again, there’s no way to do this other than exiting the game and coming back in.

In spite of its horror-inspired theme, the game isn’t very scary, either. The cutscenes are bright, colorful and cartoonish, which doesn’t exactly establish an atmosphere of terror. I suppose this will either be a disappointment or a good thing, depending on how easily spooked you are. The music, however, does a great job of invoking a moody atmosphere.

The 60 minutes of free play offered in the demo will give you a good idea of what you can expect across all of the game’s 30 stages. The game’s story might be enough to entice some people to play to the end, but expect some frustration along the way.

Delaware St. John: The Town with No Name Review