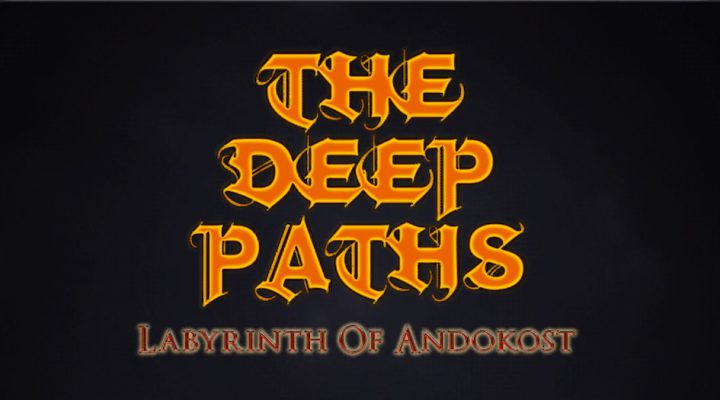 No auto-map and the map provided is terrible

I’m always down for a dungeon crawl. Sometimes I prefer things to be a bit lighter and more accessible. Other times I’m looking for some nitty gritty micro-management. Heck — sometimes I just want an old school roguelike to hand me my butt. So yes, I was happy to give The Deep Paths a shot. But it didn’t take long for me to start feeling disappointed. 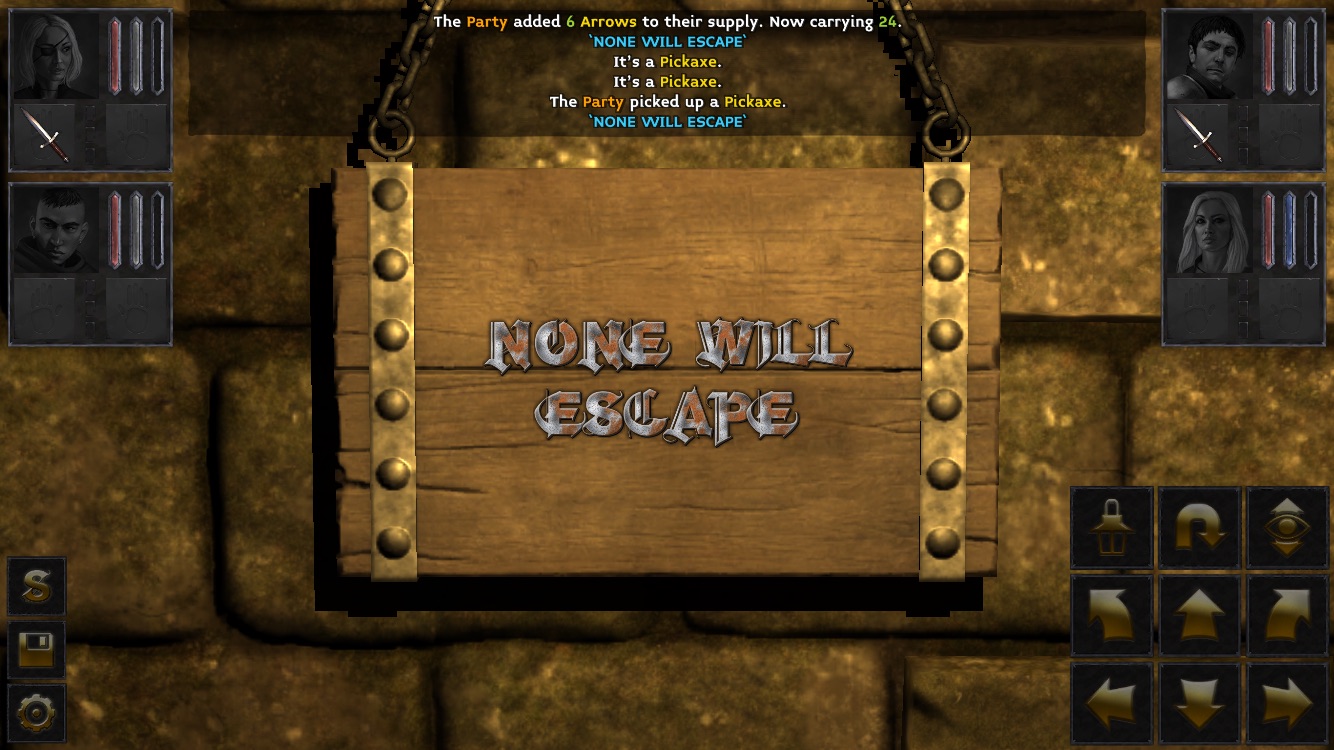 I know it’s trite and cliche and whatnot to compare games to other games, but I’m going to do it anyway. If you’ve played Legend of Grimrock, you’ll have an idea of what to expect with The Deep Paths. It’s an old fashioned dungeon crawler in which you put together a team of four characters and wander around a dank, trap-filled dungeon in first-person one tile at a time. But it’s not turn-based, so there’s a timing element to it. Although in The Deep Paths’ case there’s a bit more of an underlying story, and the characters you create will talk to each other and other characters as you progress. This is fine. Good, even. I’m totally into there being more games like Legend of Grimrock in the world.

The story isn’t particularly gripping, but I appreciate its inclusion all the same. A fabled tomb/dungeon has been uncovered, and your team is being sent in to investigate before every would-be adventurer in the city gets themselves killed trying to uncover its secrets. You maintain contact with your “handler” of sorts via a magical radio (not weird and out of place at all, no sir-ee), and every now and then your own team members will chime in with their thoughts and observations. It’s… okay. It gets the job done, I guess. 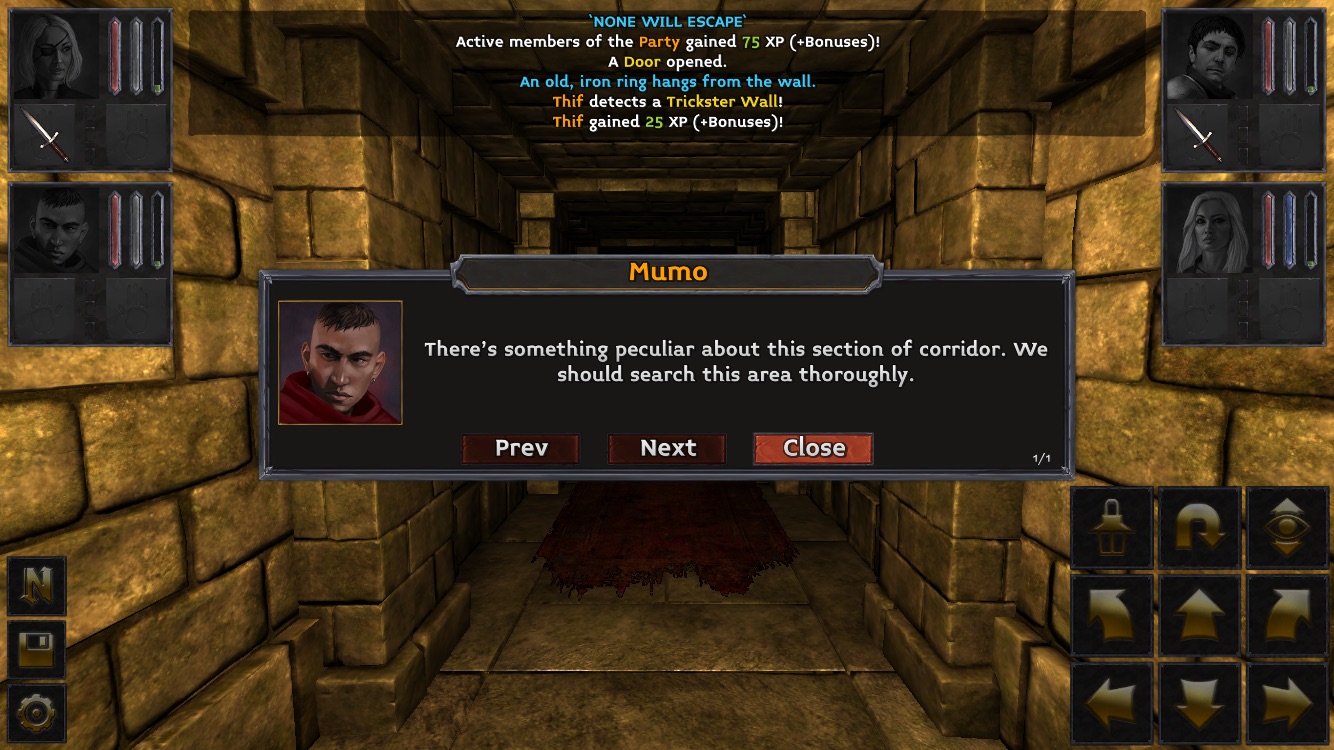 Now I will say that The Deep Paths looks pretty good. The claustrophobic dungeon walls look properly old and oppressive, the animations for heavy doors opening and entire sections of wall sliding away when you uncover a secret are satisfying, and the enemies I’ve encountered look the part. The sound is another matter, with decent but basic audio for doors and such but some oddly out of place (and disproportionately loud to the point of sounding a little blown out) slips for things like collecting items and pushing buttons. Then there are the enemy sounds which, to put it kindly, are obnoxious. I’ve never hated dungeon rats so much in my life. The sounds play every time they move, which is exactly as repetitive and irritating as you’d expect.

The controls aren’t great either. All they do is move forward, backward, left, right, turn, spin 180, and look down. There’s a button for each action in a little grid in the bottom-right corner of the screen. It should be a simple matter of tapping on what you want to do and it happens, but the buttons are so small on a phone screen that the game registers the wrong press fairly constantly. It’s more annoying than game breaking, but add to that the rest of the clunky interface where sometimes you tap to pick up an item and other times you have to drag it onto a character portrait (sometimes it’ll register drags to some portraits better than others, too), and playing starts to feel like a chore. 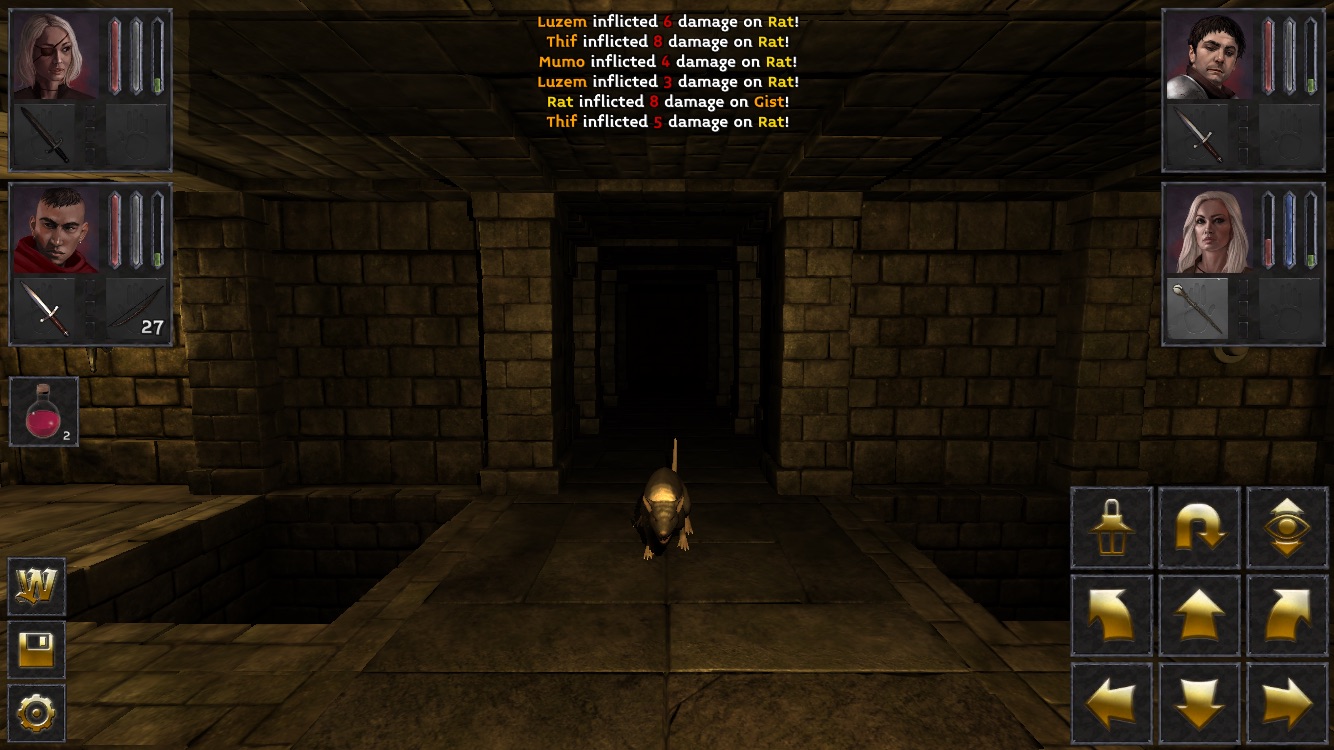 Even the map has issues. I’d expected it to automatically fill out as I explored the dungeon, but nope. Instead you have to find the map for each floor, which is usually hidden. That doesn’t sound so terrible, right? Well the map also auto-rotates to match your viewing orientation. So every time you turn 90 degrees so does the map. It makes trying to figure out where you are and where you want to go significantly more problematic than it should be. Why the map doesn’t just have a standard N/S/W/E orientation and the direction your party icon points changes to match your facing instead is beyond me.

The Deep Paths is okay. If you keep the volume low or play on mute. And you have the patience of a saint for clumsy controls/menus. And you don’t ever use maps in games. I suppose if there weren’t similar games that have been out for a while that do what this one does better, it wouldn’t seem quite so bad. Unfortunately for The Deep Paths, we live in a world where Legend of Grimrock exists.