The Dark Hills of Cherai Review 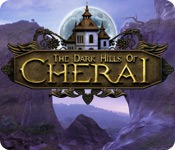 There are so many hidden object games now that it’s difficult for one to surprise or even impress you, but that’s exactly what The Dark Hills of Cherai will do. It hits the expected HOG notes beautifully, but adds in brand new melodies that are wonderfully unusual and unexpected.

The story is somewhat meandering tale about a grandmother sharing a tale with her grandkids about an evil magician, an adventurer, and a lost treasure. One of the children goes off in search of the treasure and swiftly gets himself captured by the magician, leaving it up to the other kids to save him. The story is told through journal entries, images captions during brief interludes, and a golden butterfly that you find along the way. If you’ve ever felt a little guilty for fast-clicking your way through a game’s storyline, you may do so here with a clear conscience. It’s not the plot that’s going to keep you glued to your mouse, it’s the gameplay, which is simply marvelous.

Dark Hills of Cherai combines hidden object sequences with puzzles and mini-games that are both inventive and challenging. The object searches are beautifully drawn and exotic, taking place in locations imbued with Indian culture and flavor. The game doesn’t club you over the head with its locale, instead working it seamlessly into its backgrounds and objects.

Though items do tend to repeat from scene to scene – you’ll find more than a few snakes, mantises and earthen pots – they’re not simple cut and pastes, but rather redrawn for every single hunt. It’s hard to remember you’re supposed to be crossing items off your list when you’re given images this lovely to stare at.

You’re given an unending supply of rechargeable hints, but the meter refills very slowly, so use them sparingly. Some of the objects you find will be added to your inventory for use in other locations or to solve puzzles, such as keys, gem stones, and bits of parchment. Most locations contain at least one item or area that requires an inventory item, or contains a puzzle. You’ll get old favorites like match-two memory games and peg-jumping, but you’ll also see some new games that will provide a very healthy challenge.

The directions for the puzzles and mini-games can be a bit confusing – I suspect a language barrier is to blame for that – and you may need to read them a few times before really understanding what it is you’re meant to be doing. If you find yourself stumped, either by difficulty or simple confusion, you can hit the Skip button once enough time has passed.

So far, sounds like a fairly standard, if very nicely done HOG, right? That’s before you realize that you play as more than one character, each one venturing through a different part of the landscape – and that the kids can share items with each other. Rather than forcing you down a linear path, Dark Hills of Cherai lets you move between locations as you like, including the "meeting place," where the children can give each other items from their inventory. If Tara finds herself stuck, it may be because she has to wait for Rahul or Maya to find the item she needs to continue.

Hopping back and forth between the children is never confusing or disjointed -changing characters is as easy as clicking their pictures at the top of the screen. A handy spirit guide gives you a nudge to let you know when an item is intended for one of the other kids, preventing the game from ever becoming an exercise in frustration.

The Dark Hills of Cherai is a perfect balance of the familiar and the new, sure to enchant even those who feel burned out on hidden object games.