Home / Reviews / The Curse of the Ring Review

The Curse of the Ring Review 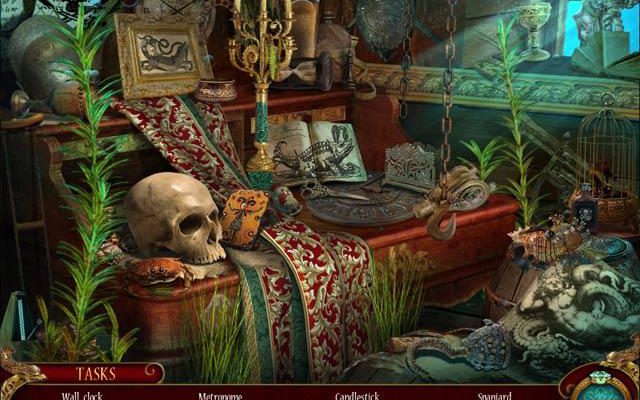 It’s a pirate curse, ye scallywags! But not a very interesting one.

The worst thing that ever happened to me on vacation was that time in Jamaica when my camera got stolen. I thought it was pretty tragic, but I guess I shouldn’t complain; when Isabel stops buy a curio shop on her trip to Barbados, she ends up saddled with a cursed ring that will suck the life right out of her if she doesn’t track down a bunch of pirate treasures by the end of the week.

So begins the aptly named The Curse of the Ring, a hidden object game that follows the now-familiar formula of hidden object levels paired with puzzles as Isabel combs sunken ships and pirate hangouts to track down Captain Flint’s lost loot. You’ll be presented with a number of objects you have to find in each location, as represented by icons in your task bar. Some will be lying around in plain sight, others will require you to find them within hidden object levels that you can zoom in on from the main environment. The hidden object levels are straightforward affairs, with a list of things to find and a nicely-detailed collection of junk in which to find them. 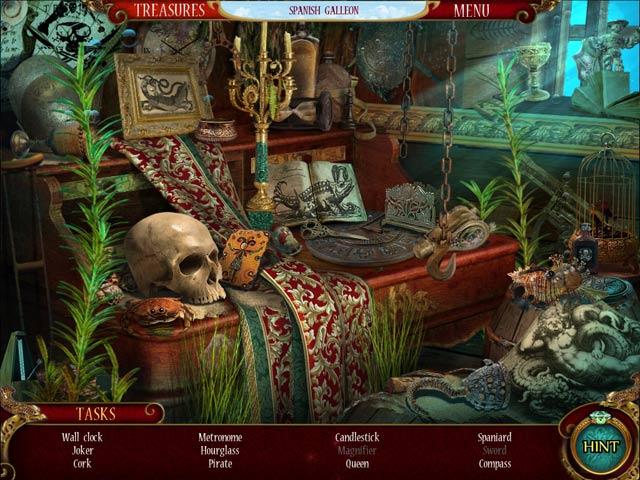 The Curse of the Ring adds a pleasant wrinkle to locating the objects in your task bar by scattering them across the many rooms that each environment entails. While scuba diving to explore a pirate ship, for example, you’ll have to move throughout not only the ship but also your topside boat to find everything you’ll eventually need to clear the area. To make things a bit easier, a little lock appears on an object’s icon if you’re currently searching the wrong room. Given the number of rooms that might make up a complete location, having a nudge in the right direction is particularly appreciated.

This is especially true because the hint system in The Curse of the Ring seems to take delight in being passive aggressive. In one area, I had to find the missing towers and ships that made up a castle diorama. The last tower was eluding me, so I clicked the hint button … only to be told I needed to pay attention to the castle diorama. Thanks, I knew THAT much. The hints work just fine within the confines of a hidden object level, but are useless for anything else. 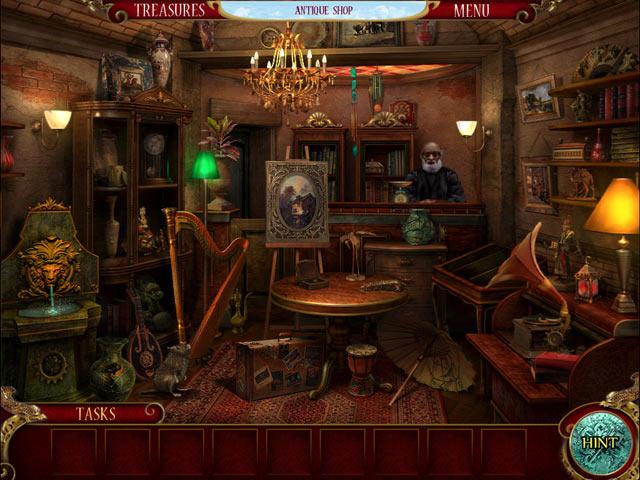 In between poking around for items and objects, you’ll have plenty of puzzles to solve. Some simply require collecting the right bits and pieces, such as assembling your scuba tank before taking a dive. The majority, however, are the classic puzzles that you’ve already done plenty of times: shuffling tiles until two color groups switch position, reassembling pictures by sliding rings around, putting gears in the right spots to make a clock work. They’re lovely and work exactly the way they should, and you can skip them if you’d rather not be bothered, but don’t expect any surprises when it comes time to tackle one of The Curse of the Ring‘s brain benders.

The Curse of the Ring is a bit clunky in places – its animations are awkward and it’s not always clear what you’re supposed to be doing next – but it does what it sets out to do. It won’t blow your mind, but it’s quite good looking, keeps up a good pace, and has more then enough variety to keep you interested. If you’re looking for a unique HOG experience, this isn’t it, but if you just want to spend some time breaking yet another curse in the Caribbean, this is the way to go.