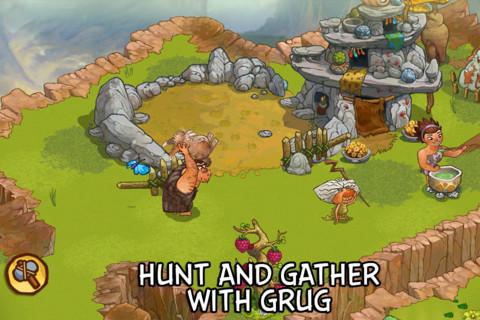 If you have plans to meet The Croods this spring, you’re better off getting to know them in the movie theatre.

The Croods is an animated family movie from Dreamworks. One of its main characters is Grug, a prehistoric patriarch who is terrified by the new world that’s evolving beyond the mouth of his cave. Despite the bouts of paranoia he suffers through the film, Grug looks completely happy and at ease in Rovio’s game adaptation of The Croods. That’s because The Croods for iOS is as unimaginative and unchanging as a social farming sim gets.

The Croods opens up with Grug deciding that his family needs to learn how to hunt and gather. He begins to assemble traps so that he can catch and tame animals (which is more in the realm of agriculture, not hunting and gathering, but why nitpick about a family of cave-people that speak English). You help the Crood family do their thing by trapping animals, feeding them, taming them, and then feeding them some more so that they generate the resources that are necessary to build more elaborate traps for higher-level animals.

The Croods is essentially a run-of-the-mill monster taming/resource farming game, which is highly disappointing when you consider that it’s a Rovio project based on what appears to be a pretty unique movie concept. Neither Dreamworks nor Rovio are hard-up for cash: Could neither studio come up with a more inspired idea than tapping on monsters? Even Grug lampshades the awkward game premise by pointing out how weird it is that taming and feeding animals makes them generate resources like rocks, carrots, and berries.

Worse, The Croods constantly thrusts its open palm out at the player. There is a great deal of waiting around for money and resources, but you can speed up almost any process with gems, the game’s hard currency. You start with a healthy stash of gems, which is nice, but speeding up a process that takes longer than a few minutes can require forty gems or more. You’ll burn through your cache in no time, and then it’s time to take out Ol’ Visa.

This aggressive panhandling is especially unfortunate in a game that’s almost certain to be the first app a kid is likely to download as soon as he or she steps out of the movie theater. They’re not going to be happy to learn that some traps (and ergo, some animals) can only be bought with gems. Or at least their parents won’t be happy to learn as much.

The Croods has a few redeeming traits. The characters are bright and colorful, and have fun dialogue. The monsters are an interesting bunch, too. Polar bear/mole hybrids are neat to begin with, but it’s even better when they’re classified as “molarbears.” It’s just a fun word to say. “Bear Owl” is more questionable, though. Watch that the corpse of TSR doesn’t rise up from the grave and slap you with a lawsuit, Rovio.

Ultimately, The Croods is a slow, mediocre game that doesn’t require you to do much beyond tap the screen on occasion. Only the littlest fans of the movie will get anything out of it—and you might want to turn off in-app purchases before you let them get too far.