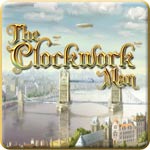 The Clockwork Man is a hidden object game that takes the "quality over quantity" philosophy to a bit of an extreme. The meticulously detailed hand-drawn scenes demonstrate a degree of breadth and depth – including the ability to scroll the screen left and right, and zoom in on specific areas of the screen – never before attempted. It’s creative, fun and fresh while it lasts, but that’s the catch: the adventure is over all too quickly after three short but sweet chapters.

The world of The Clockwork Man is a charming homage to "steampunk" whose story begins in late 19th century London. Miss Miranda Calomy, an aspiring engineering student, receives a letter from her grandfather Cornelius, himself an acclaimed scientist, urgently requesting her help, and so she sets off for South America with her trust robot helper Sprocket in tow.

Although there are a couple of Mystery Case Files-style puzzles and inventory-based challenges in The Clockwork Man (such as collecting pipe pieces to repair an air conditioner), the bulk of the gameplay is purely seek-and-find – in other words, searching through cluttered scenes to find a list of specific items, such as an orange, diver’s helmet, or candlestick holder.

The items you have to find are more or less consistent with the time period and setting, which is always a refreshing thing to see in any hidden object game. An effort has also been made to explain why Miranda is searching for items, whether it’s the need to find spare parts to repair an airship’s engine, or track down Miranda’s clothes after her suitcase opens and dumps her stuff all over town. Sometimes you’ll have to find lists of multiple items, like five bracelets or eight picture frames.

Gameplay in The Clockwork Man is untimed, and you get as many hints as you need courtesy of Sprocket. Throughout the game Sprocket will receive upgrades that allow him to provide different types of hints, such as revealing an item’s silhouette, or allowing you to specify which exact item you’d like revealed. There are four upgrades in total, and each requires a different amount of energy to use. Hints are unlimited, provided you give Sprocket a chance to recharge.

The most notable thing about The Clockwork Man are the scenes themselves. Some are traditional "static" scenes, but when any of the four points on your compass light up it means you have a scrollable and/or zoomable scene. By tapping the left or right arrows you can scroll the screen to the left or right to reveal more of it – think of those long panorama-style photographs taken with wide-angle lenses. That’s not all, though. Thanks to a technique called parallax, each scene actually has a foreground and a background, which means that when you scroll a scene, you can actually see different parts of the background by looking "behind" other objects. The effect, needless to say, is quite cool.

As its name implies, the zoom function simply allows you to zoom in on one particular part of the scene for a closer look, but it’s accompanied by a graphical "swoosh" that, again, gives the scene depth and adds to the illusion that you’re actually travelling "through" it.

I liked The Clockwork Man a lot. As far as production values, craftsmanship and creativity go, I have few complaints save for the old "item descriptions are too vague" issue occasionally rearing its head with multiple instances of stone masks, candlestick holders, and so on sometimes making it difficult to figure out which is the "right" object that you’re supposed to click on.

I was, however, quite disappointed with the game’s length. Not only are there only three chapters in the game, but the third one is basically a maze and a couple of puzzles. What started out as a grand adventure seemed to end all too abruptly after about two and a half hours of play capped off with a typical cliffhanger ending.

Granted, once you’ve finished the game you unlock Freeplay mode, and can also replay the main mode with the items in different places, so there’s a bit of replay value. There’s no knocking The Clockwork Man‘s polish, but it’s for that very reason that you’ll likely find yourself wishing there was more of it.

The Legend of Crystal Valley Review