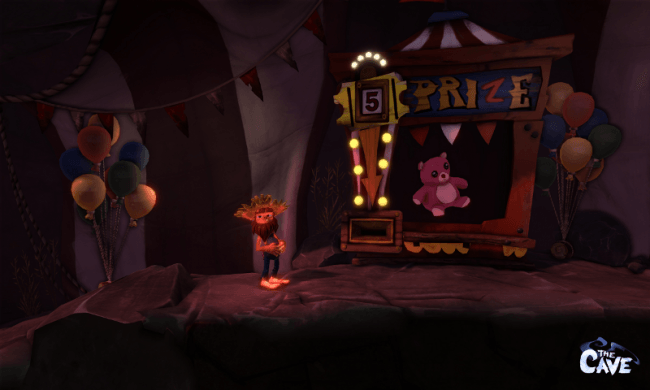 I probably wasn’t the right person to review The Cave. When I first heard that Ron Gilbert was doing a puzzle platformer, my reaction was lukewarm at best.  While I’m all for new ideas, Ron Gilbert is the man that gave us Maniac Mansion and Monkey Island.  If he wasn’t doing a new point-and-click adventure, I just wasn’t interested in learning more.  As it turns out, that was a really ignorant prejudice on my part.

While The Cave may not follow the same formula as his Lucasarts classics, this is a Ron Gilbert adventure through and through.  Forget the running and jumping for a moment.  The humor, the puzzles – it all shines just as bright as you might have hoped.

The premise centers around – you guessed it – a cave.  But this isn’t just any cave.  It’s a magical cave that people can explore in search of their greatest desires.  It’s also a talking cave, which is handy, because said cave can’t wait to serve as your trusty narrator.

You’ll explore the cave as a trio of characters that you’ll hand pick from a selection of seven; monk, adventurer, hillbilly, scientist, knight, time traveller, and “the twins.”  Each has a special power as well as their own set of levels that will unfold as you explore the cave, giving the game instant replay value.  Play through the game once with the monk, time traveller, and scientist?  Play it again with the knight, hillbilly and twins for a (mostly) different experience.

Playing with a trio of characters that you can switch between definitely has a Lost Vikings feel – especially since many of the puzzles require you to use each character in a different way to solve them.  But the puzzles here aren’t of your typical puzzle platformer variety.  At least not all of them.  Sure there are the “pull the lever/stand on the plate to open the door” environmental puzzles that we’ve all grown to know and love, but Gilbert has thrown a brilliant curve into the mix by making the game’s bigger puzzles the sort of noodle-scratchers you’d normally have found in… well… a Ron Gilbert adventure game!

While I normally like to keep reviews as spoiler free as possible, it’s tough to explain what I mean about the puzzles without giving some kind of example.  So – SPOILER WARNING – here’s a nice slice of life from The Cave: One portion of the cave tasks players to pull the Excalibur from the stone.  To even get a chance, though, you’ll need to get an amulet from the king’s daughter.  She in turn wants the gold from the dragon, because frankly, you’re not her type.  She’d rather be off at college studying to become an electrical engineer, anyways.  To get the dragon’s gold you’ll have to figure out a series of puzzles that involve distracting an overly violent guard to get a key, using an elevator in a clever way, and confusing a dragon to sneak up behind them and snatch the treasure.

tl;dr – This isn’t a puzzle platformer that’s about flipping switches.  The Cave demands cleverness and thought, just like a classic point and click adventure would.

The game is also jam-packed with the silly kind of humour that Gilbert’s fans already know and love.  One of the first puzzles, for example, has you locating items for the cave’s gift shop, because the attendant is too distraught without merchandise to open the door and let you in.  The dialogue – both from characters that you meet and the cave itself – always managed to put a smile on my face and give me a chuckle.  And even the art style – in all its cartoony glory – has the fun and campy vibe that you’d hope for from a Double Fine production. 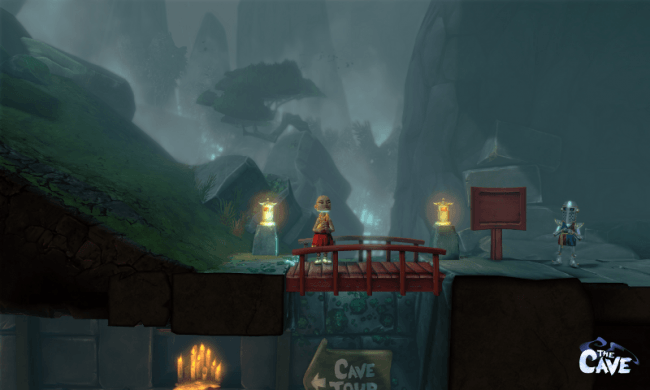 The only real sore spot in the game is the amount of backtracking that you’re expected to do.  It’s the sort of thing that we’ve come to expect in adventure game design, and we’ve grown to love in Metroidvania-type platformers – but The Cave borrows more from the former than the latter.  Instead of occasionally getting an item that might force you to return to a previous area, you’ll be expected to revisit certain closer areas over and over again in succession.  For example, in one puzzle that involves you finding and returning three mine carts, you’ll need to send a character back to the starting point after finding each cart just to collect a single item.  In another instance we had to climb back up to a hot dog machine three times to get a new wiener because we kept goofing on the puzzle solution.  If the game offered a fast travel option – like a way to teleport to another character’s location when all three are spread out – it would have gone a long way to alleviate such frustrations.

Minor quibbles about backtracking aside, The Cave is a brilliant offering. With deeply satisfying puzzles, smirk-inducing humor, and substantial replay value, Ron Gilbert has once again lived up to his lofty reputation as a master of game design.  He didn’t abandon the adventure game formula – he just adapted it for a wildly different genre.  And the proof is in the pudding, folks; The Cave is a game that no puzzle-loving gamer should miss.