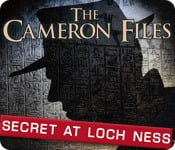 History. Banshees. The Loch Ness monster. With all of these elements it’s hard to see how a game could go wrong. Yet, in spite of its interesting premise, The Cameron Files – Secret of Loch Ness certainly leaves a lot to be desired. It’s a confusing tale that gives players an compelling world to explore, but unfortunately it’s all over way too quickly.

In the game, detective Alan P. Cameron is summoned to the Scottish country side to investigate some strange occurrences. These include the aforementioned supernatural events, as well as a few missing people, some secret tunnels, and other mysteries. But while all of the aspects seem great on their own, in the game they join together to form a very hard to follow story. It’s still interesting, but most of the time players will probably be unsure what exactly is going on and just who each character is.

Like most adventure games, Secret of Loch Ness takes places from a first person perspective. But, unlike most adventure games, players have full 3D control over where the character looks. You can look up, look down, wherever you want, which makes the exploration aspect that much more engrossing. The side-effect is that exploring can be a little nauseating at first, until players become accustomed to the unique camera.

Secret of Loch Ness was originally released in 2001, and it shows. The characters move awkwardly and are oddly proportioned and the areas you explore are pixelated and blocky. And this poor presentation extends to the audio as well. The music is sparse–through the most of the game things are relatively silent–with only a few sound effects to keep players company. And while the voice acting isn’t completely terrible, it’s tough to find even one convincing Scottish accent amongst the cast.

But where things really click is with the difficulty. While adventure games have a tough time straddling the line between overly difficult and just plain easy, Loch Ness does an admirable job.  After an abrupt start to the game, which gives players little indication of what to do, the game does a great job of moving players along. It forces you to explore, but at the same time provides enough hints that things never get too frustrating. But if they do, Cameron just so happens to carry around a notebook that lets players know what they should be doing at any given moment.

There is one aspect that might turn off some potential players, though: you can die.

Death can only happen at certain points, when the game introduces timed puzzles. If you don’t successfully complete whatever the goal is in the allotted time, it’s game over. It usually only takes a try or two to figure things out, but if you do fail the game takes you back to your last save point. So unless you make sure to save often, chances are you will be forced to play through several parts of the game more than once. But, while they can be frustrating, these sequences do a great job of adding a sense of tension that is otherwise lacking in the game.

Though the story is confusing and the presentation is dated, the biggest drawback of Secret of Loch Ness is that it’s simply over too quickly. The game takes place over five days, and only takes a few hours to complete, even if you take into consideration the areas you’ll have to re-play after dying.  It’s especially disappointing because the game gives you such an interesting world to explore, packed with plenty of secrets to find, but so little time to enjoy it.

The flaws of Secret of Loch Ness are especially frustrating because the game’s premise holds so much potential. Ultimately though, it’s a title with a convoluted plot that makes little sense and some terribly dated visuals. It’s not that the game is bad, it’s just not as good as it ought to be.

The Adventures of Fatman Review