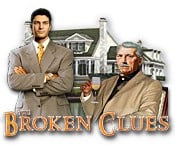 The Broken Clues might as well be called The Broken Game, because while it’s technically playable, the process of doing so isn’t enjoyable. Think I’m being too harsh? You could download the demo of this hidden object game yourself and see what I’m talking about, or just keep reading and save yourself the hassle.

Through a dismal introduction, which consists of a page of text riddled with grammatical errors, it’s possible to piece together that Mr. Harrison, a wealthy businessman, has been murdered and the case is being investigated by private detective Matthew Hebrew. Your job, as the detective, is to follow up with the two prime suspects: Harrison’s business partner, Mr. Samson, and a singer named Ms. Linda. "Our thriller and challenging story started there!" the text proclaims. Oy.

You’ll be given a list of "Places to be investigate" to search for clues. In each scene, you’ll be presented with two lists of items to find. The first is a list of random items, some of which exist in the real world (such as cassette, kitty and star) and some of which appear to be made-up words that will leave you scratching your head, like "wash brush," "glide camera," "pen drive," "grass catcher" and "tomato mozzarella" – I think they meant Caprese salad.

Next, you’ll search the scene a second time for a list of themed items, such as finding 10 spoons, pens or "Knifes." The third scenario is a spot the difference challenge where you must point out 10 discrepancies between two side-by-side scenes.

Unfortunately, searching for the objects is a chore. First, there’s no artistry to the composition of the scenes – items are just slapped overtop with no effort to blend them. Also, items are frequently too small to make out, and there’s no sense of scale, so you can expect to see things like a miniscule snorkel hidden inside a wine glass. Items are also indistinct, often blending in too much with the background – trust me, it’s no fun to try to find 12 pieces of a letter in a bedroom dominated by a white bed, sheets and curtains. To add insult to injury, each and every wrong click knocks 3 seconds off the timer. You only get three hints per level, which rarely seems like enough.

The spot the difference puzzles can only be described as torture. The "difference" could be something as subtle as a small shadow or a missing divider between two bricks. What’s more, it seemed like one panel was frequently more exposed than the other one, which created small differences in color and shadows that could be taken for differences, but actually aren’t.

What little plot there is in the game is rendered nearly incomprehensible by sentences that are English only in the sense that they technically consist of a bunch of English words strung together. I touched on the game’s poor localization before, but it bears repeating. Here’s just a small taste of the kind of instructions the game gives you:

It’s completely unacceptable for the language to be this bad. Hidden object game fans are often willing to put up with spelling mistakes or gaffes here and there if the gameplay itself is solid, but sadly The Broken Clues fails to deliver on that front as well. In short: avoid.

Gamezebo tip: If you like hidden object games, try Mystery Case Files: Madame Fate, Mortimer Beckett and the Time Paradox, and Samantha Swift and the Hidden Roses of Athena.