Home / Reviews / The Book of Wanderer: The Story of Dragons Review

The Book of Wanderer: The Story of Dragons Review 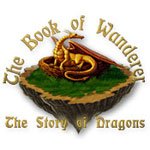 It’s sometimes difficult to build upon the simple things in puzzle games. While awkwardly-named, The Book of Wanderer: The Story of Dragons provides a lot of fun, with surprisingly deep gameplay, and enough twists and features to make it stand out.

The Book of Wanderer‘s theme is quite Medieval, but never gets cloying. From the first strains of the title screen’s theme to the in-game background music, everything is atmospheric. Kudos to the composers for this game to write music that repeats, but even after many hours, never gets tiresome. The graphics have a have a high level of polish, and everything seems to have a certain sparkle and sheen.

The gameplay’s the thing, and The Book of Wanderer really delivers, despite a case of deja vu. The core gameplay is similar to that of Chuzzle. Rather than moving individual pieces, you click and drag entire rows or columns to match three like-colored dragon eggs in each of the games 30+ levels. They can be matched vertically, horizontally or in an L-shape. As you make matches of three or more, each egg cracks to reveal some blue magic that fills a meter below the playfield. Fill the meter and you move onto the next level. However, that’s where the similarities end.

In a land of dragons, magic naturally plays a big role. As you play, a number of evils can befall your eggs. They can be frozen (preventing the row or column from moving), petrified (preventing them from being able to be cleared) or linked (a magical beam of green light binds two eggs together, forcing each egg’s row or column to move with the other). While the first two obstacles aren’t anything new, the linking provides a new challenge.

Imagine two eggs linked side by side. That would mean that their row would move alone, but two columns would be forced to move simultaneously. Now, imagine a match is made underneath one of the eggs, dropping one of them down a level or two. The result would be that the columns would still move together, but now, two different tows would move, with a middle row standing still.

These gameplay variations add many elements of strategy. What might be considered a negative can actually be turned around as a positive. As you continue to progress, the amount of negative magic cast on your eggs gets more frequent and more difficult. Fortunately, you are also armed with a series of spells and magic of your own. By matching four or more of certain colors of egg, you create magical eggs. Some of the effects include eggs that clear whole rows or columns, wildcard eggs, clearing all linked, frozen or petrified eggs, or even casting a lightning bolt over the playfield to clear random eggs.

You also have access to spells that help clear some negative effects off the field, clear all of a single color of egg, or if things get too complicated – or you run out of moves – reset the board to continue playing.

There are even fun bonus levels, too. After you complete each of the game’s lands (with names like Phuktu, Silvekur and Evalon), you are given a puzzle to fit together broken pieces of a picture of game art that, with the click of a button, can be set up as your wallpaper. (They’re beautiful enough that you’d actually want to!) There’s also a large-scale puzzle to clear groups of two eggs or more as long as you can to earn bonus points.

Finally, there are even trophies for completing certain objectives, like clearing three frozen eggs, destroying more than half the board in a single move or creating a cascading combo of 10 moves or more.

Not everything is perfect in The Book of Wanderer. The loading screen at startup is incredibly, inexplicably long. There are few tutorials, not telling you things like what your spells do, or how to use certain magic that I only realized I could use by randomly clicking. There are two modes, Classic and Arcade, but I didn’t find many differences between the two.

There is also a story that unfolds as you progress, but I only found it by randomly clicking on a weird square on the side of the playfield, showing some rather forgettable text that had no bearing on my gameplay. Finally, you cannot skip the picture puzzle. They get quite complex in each subsequent puzzle, and can take a fair amount of time.

But as long as you treat The Book of Wanderer: The Story of Dragons as a beautifully-themed puzzle game, you’ll find many hours of addictive, deep puzzling. So get cracking, and give it a try.

For similar games, try Chuzzle, High Seas: The Family Fortune, and Charma: The Land of Enchantment.