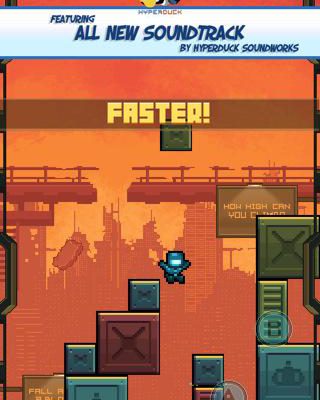 When it comes to App Store scandals, the thievery story about The Blocks Cometh is easily one of the most interesting tales of 2011 so far. And yet amidst all the hoopla and skulldiggery, there was a really good game that was just waiting for its proper release. Developer Halfbot has finally brought their survival game to iOS gamers in the manner in which it was always intended – and it was well worth the wait.

The Blocks Cometh is a game about dodging and climbing an endless series of falling blocks. Players will climb as high as they can before they get trapped between two blocks or fall between the stacks to their untimely death.

The controls here are deceptively simple. Players will use on-screen arrows to guide their character left and right, and use two buttons; one to jump and one to shoot. Since the game is played vertically, your thumbs can feel a little crowded at first. Don’t worry – it doesn’t take long to adjust. 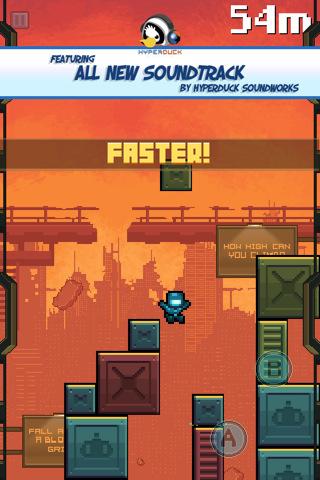 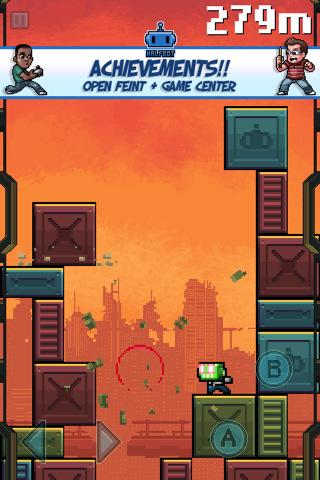 As simple as those controls may be, they do little to showcase the actual range of gameplay. Let me paint a picture for you: There you are, atop a tower of blocks that’s quickly racing to the bottom of the screen. Across from you is another stack of blocks, but it’s too high to possibly reach the top with a simple jump. What do you do? Well, you could break out your weapon and blast blocks until the top comes down to a more attainable level. Or you could try to maneuever your way to the top through a series of wall jumps and double jumps in the air – all while trying to dodge the relentless onslaught of other falling blocks. Choices, quick moves, and craziness sum up the Blocks Cometh experience perfectly.

In addition to jumping with your main character, Halfbot has also included a number of unlockable characters, each with their own unique style of play. This helps boost the game’s naturally high level of replayability even further, offering a great carrot on a stick for gamers who just need to see everything. And with requirements like “climb to 350m” and “climb to 150m without using an attack,” there’s a good deal of challenge involved in reaching these unlockables without the difficulty ever making it feel like they’re unattainable.

Still – difficulty is the name of the game in The Blocks Cometh, so if you’re not the sort of gamer who’s looking for a challenge, you should probably start looking elsewhere. This is a survival game that will really put your platforming skills to the test. Don’t be surprised if games only last 10 or 15 seconds on your first handful of tries. Even when you’re doing really well, we’re still only talking about a minute or two before you find yourself crushed between falling boxes. For gamers looking to test their mettle, The Blocks Cometh offers everything you’re looking for in a survival game. 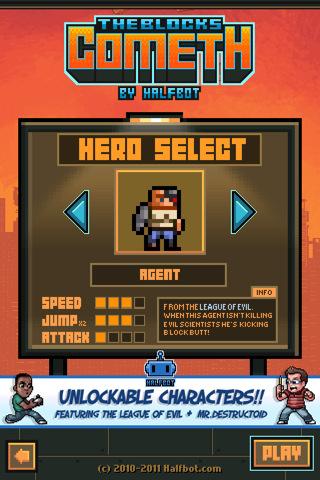 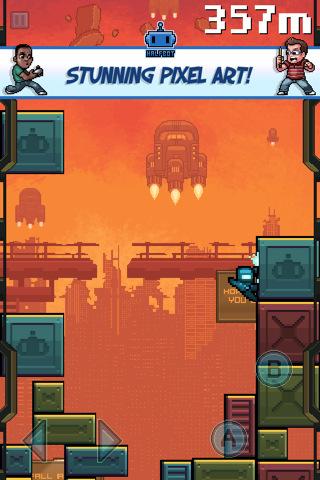 For all the fun we had with The Blocks Cometh, there were a few wriggles that managed to keep us from completely getting lost in the experience. The physics felt a little low-gravity, resulting in jumps that felt more like you’re moving around on the moon than experiencing the hard and fast motion we have here on earth. The collision detection could to be a little more forgiving, too. Sometimes you’ll be standing right next to where a block is about to land thinking you’re completely safe, only to find out you’re a pixel or two over the line resulting in your inevitable death by squishing.

As far as fast-paced, death-at-every-corner survival games go, The Blocks Cometh easily ranks up there with the best of the best. It’s tough as nails, but if you’re even tougher this is a challenge you’ll absolutely want to face.