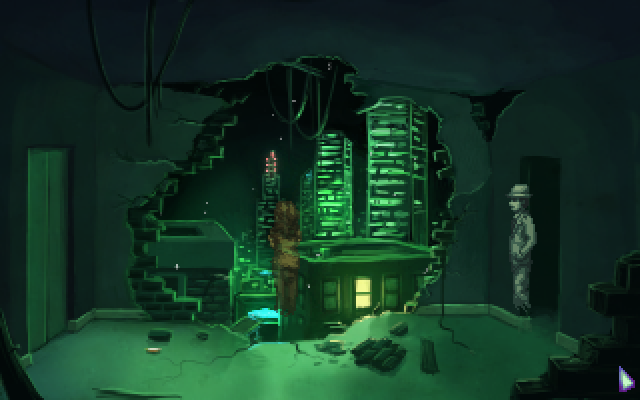 A grand finale, no bones about it

What seems like just another day on the job for spirit-wrangling Rosa Blackwell turns out to be an adventure cumulative of everything she has experienced through her entire life. While The Blackwell Epiphany was my first experience with the series, it was clear in no time that the writers at Wadjet Eye Games were raising the stakes in Epiphany higher than they ever dared to raise them before. With guest appearances by characters from way back from the first game, The Blackwell Epiphany powerfully and poetically concludes a game series which has lasted nearly a decade.

The Blackwell Epiphany is a point-and-click adventure where players control two protagonists (Rosalinda “Rosa” Blackwell and her ghost sidekick, Joey) who are tasked with finding restless spirits and guiding them to the afterlife to finally find peace. While Epiphany does feature a few puzzles, a staple of the point-and-click genre, the majority of “puzzles” involve uncovering facts by grinding characters for information, and conducting online research through Rosa’s smartphone. About halfway through the game I fell into the rhythm of searching online, checking with the police, and asking suspects about a new piece of information I had uncovered. By the end of Epiphany I felt like I was ready to be a paranormal investigator myself.

Both Joey and Rosa come with their own set of abilities which they can use in the hunt for information. Rosa comes equipped with her smartphone, which is the information hub of the game, and an always-warm cup of coffee that is used a handful of times during puzzles. Joey, being a ghost, has the unique ability to traverse through solid walls and locked doors, allowing Joey to discover information that Rosa may not have direct access to. 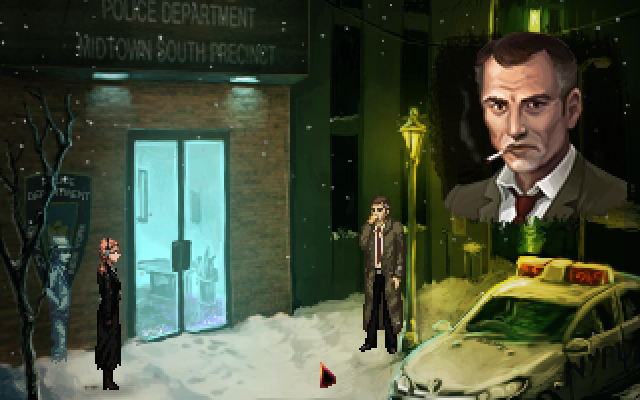 Joey can also use his ghostly form to stir up a weak gust of wind in order to move small objects. In one case, I used Joey to blow a glass off of a table in order to distract the bartender, allowing Rosa to slip by unnoticed.

The game takes place across real-world New York, and players familiar with the region may recognize a few landmarks. Turning on the commentary feature in the options menu will illuminate many real-world inspirations the game designers had for the game. I would even recommend playing through the game for the first time with the commentary (especially if you’re not the sort of player who plays through a game twice). Hearing first-hand from the designers and developers at Wadjet Eye Games really adds a level of personality that would be impossible to inject otherwise.

Beyond the inspired settings, the game’s dialog is the highpoint of The Blackwell Epiphany. The banter between Rosa and Joey keeps an otherwise gloomy game lighthearted. Joey, in particular, made me wish I had a snappy ghost sidekick to follow me around through my daily life. 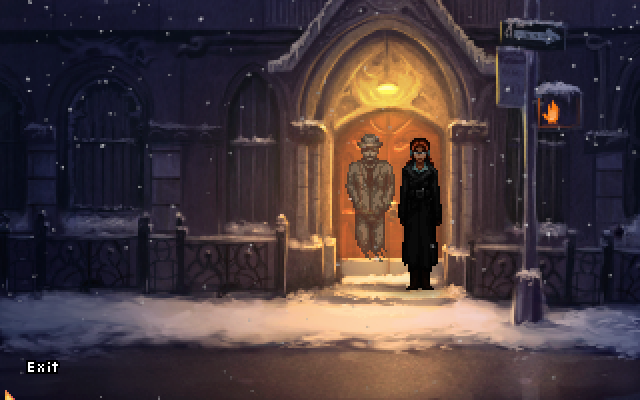 The great writing extends to many of the supporting characters as well. The five stages of loss (denial, anger, depression, bargaining, and acceptance) are all well represented within the characters of this game, and the voice actors present believable and at times, moving, performances throughout the entire game.

The only real complaint to be had is a technical one. The game suffers a blow to its presentation in the form of a locked low-resolution issue. This issue has to do with the limitations of Epiphany’s game engine, Adventure Game Studio. On larger monitors, the game just doesn’t look great when run full screen.

As a newcomer to the series, I was afraid that much of Epiphany’s tension would be lost on me as I had not experienced the buildup of the previous four games. But with such likeable protagonists, puzzles that elucidated the story further rather than slow it down, and plot twist after plot twist, by the finale I felt like I was part of Rosa and Joey’s story. I felt like I was right there with them at the end when…well, you’ll just have to see for yourself.