The Bachelor: The Videogame Review 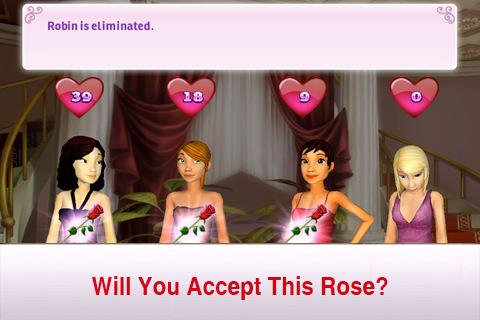 Even fans of the show would have a hard time falling in love with The Bachelor: The Videogame

In the television show The Bachelor, the most drama comes from the so called “rose ceremony” where we get to see who stays and who goes by who’s left standing there roseless. If you lined up a selection of iOS games side by side and decided in a very public way which games would get a rose and stay in the competition, I wouldn’t feel the least bit sorry about leaving The Bachelor: The Video Game empty handed.

In The Bachelor: The Video Game you’ll play through 3 seasons of the show, each with 3 episodes of mini-games in which you’ll try to win the heart of a lucky lady or guy. Scoring high in each game will guarantee you a rose when the time comes, and if you do well enough the entire season you’ll win the heart of the guy or girl.

When you first start the game you’ll pick the gender you’d like to play as and from there you’ll start in episode 1 of season 1. Each episode is made up of 3 group date mini-games, 1 one-on-one date mini-game, and the rose ceremony (where they add up your total score). If you get a rose you continue to the next episode and repeat the process.

There are a number of problems with The Bachelor: The Video Game, but two pop up above the others as I sit here and think about it. The first is the lack of customization in the game. When I started up the game and input my name for the profile, I fully expected to create my little virtual guy that I was going to play as. You know – hair color, name, clothes, turn-offs, whatever. But there’s none of that. I was assigned to play as “Simon, the account executive. With him everyone has a good time!”

The in-game avatars are obviously bolted together. so it feels weird that you can’t make a character to play as. Furthermore, couldn’t they at least take my profile name to be the in-game characters name? I don’t want to play as Simon (or whatever), I want to play as Dan! The game’s not fully voiced or anything either, so we’re talking about nothing more than a text change here. In a game like this, an oversight like that just feels huge.

The other real problem, and sadly this goes right to the heart of the game, is that the mini-games that make up the “dates” have virtually nothing to do with competing on a reality show about winning love. In fact they really don’t even really try and fit them together. “Why don’t you sit here and take a break before finishing your date, it’s a sunny day out!” the game says, setting up the next mini-game. Then you’re painting in pictures with the touch screen acting like a coloring book. Huh? 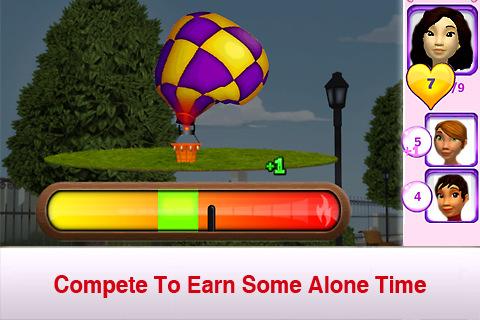 This weird disjointed feeling permeates all the mini-games, whether you’re tapping feathers that are falling down the screen or tilting the device to steer a snowmobile. To further add insult to injury, the same games come up over and over just re-skinned to look a tiny bit different (drive snowmobiles, 4-wheelers, boats, etc). The game types were kinda fun the first time through, but that’s it.

It just feels like they could’ve taken the same exact game and put a Survivor theme on it and it would’ve fit better (albeit not by much). It’s just that outside the title screen, the voicework by Chris Harrison, and the rose ceremony, there’s nothing about the actual game that says it’s a game about The Bachelor.

It would have made more sense for the game to revolve around the date more, perhaps using what you know about her to pick the right location/food/activity or maybe rhythm related about beating hearts or something. Perhaps a conversation tree game where you needed to say the right things back to the person to move the conversation along as long as you can. Something that would actually simulate what the show is like, at least a little bit.

Releases like The Bachelor are what give licensed games a bad name. It feels like what it is, a cash-in looking to take money from fans of the show, giving them nothing more than a lackluster experience in exchange. I’m not even a fan of the show, and I felt pretty jipped, if I were a big fan I think I’d be downright upset about it!