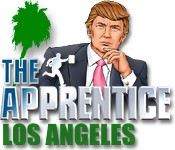 Even if you’ve not watched an episode of the TV show The Apprentice, you’ve probably seen clips in which Donald Trump points a beefy finger at some unlucky schlep and barks, “You’re fired!” In fact, Trump’s catchphrase has become almost as famous as his comb over. It was just a matter of time, then, until the show went interactive, as it does in The Apprentice: Los Angeles.

For those in need of a primer, The Apprentice is a reality show in which 18 businessmen and women compete for a shot at running one of Trump’s many companies. At the onset of a new season, the group is divided into two teams that will compete in specific tasks, such as designing and manufacturing a line of swimwear. Each week, Trump fires one member from the losing squad. Among other amenities, the winner gets a one-year contract and a hefty salary, encouraging great dog-eat-dog drama. Season Six was full of surprises, including the chance for the winning team to live in a swank mansion for a week.

You won’t see any of these twists in the game, however. Instead, you’ll be subjected to three variations on the pervasive Diner Dash theme, in which you control a single character that scampers around various settings serving customers.

Your ultimate goal, of course, is to get hired. Before you get started, though, you’ll have to select your character and choose a team to lead. Since The Apprentice is a casual game, not a hardcore simulation, this involves nothing more than clicking a portrait and picking one of seven prefabricated squads. Although each contestant has a bio, the details are irrelevant since the team dynamics of the series don’t come into play during the game. It’s just you and a bunch of customers.

Like the show, however, the game is divided into tasks. There are ten overall, each of which consists of six levels. The first three repeat twice until you reach the final task, in which you and one other contestant service the rich and famous at a celebrity ball. Every task has a dollar amount that must be met over the course of its levels; each level has a monetary goal as well. While you can fail to meet the goal for a level and still move on, you’ll have to make up the difference elsewhere.

In the first, fourth, and seventh tasks, you serve customers at a Sushi Bar. The familiarity of the mechanics, seen in countless Diner Dash-inspired games, make this part of The Apprentice easy to get into as you hand out menus, gather ingredients, pour drinks, serve confections, and collect money. As the game progresses, new services are added, such as selling balloons and umbrellas, and the pace quickens. Each customer has a satisfaction bar that diminishes the longer they wait, so it’s important to employ a quick hand and an even quicker eye.

You serve customers again in the second, fifth and eighth tasks, but instead of slinging raw fish, you assist patrons at a fancy boutique on Rodeo Drive. With your clientele seated in chairs in the center of the store, you must scurry about gathering purses, shoes, hats, and dresses for your customers to try on in the dressing rooms. Coffee and magazines are on hand as well, and once a sale has been made, the money must be collected and placed in the cash register.

The third task introduces the most changes to the Diner Dash-style formula. In it, you rent beach equipment in Santa Monica, which sounds easy, but if the game is any indication, the workers in these places have their hands full. At first, all you do is rent skateboards, rollerblades, and scuba gear, but before long, you’re handing surf boards, beach balls, and more to the customers that line up at the counter. Strategy comes into play first with the inflatables, which an assistant slowly blows up for you, and then with rental returns, which must be placed back on the shelves — all while you’re trying to get customers out the door before their satisfaction level drops too low. In the latter stages of The Apprentice, this task gets intense.

Although I was surprised to learn The Apprentice is a time-management game, it’s fun to play. Many service genre offerings turn boring partway through because of the monotony of the mechanics, but just when that starts happening in The Apprentice, the gameplay shifts focus. It’s refreshing, and because the pace of the action is increased in small increments until it reaches a fever pitch, there’s little tedium to be found. You won’t find any innovation, either, but then again, licensed games aren’t known for pushing envelopes.

Another plus are the graphics, which are bright, colorful, and full of humor. In the background of the Sushi Bar, for example, you can see the silhouette of a chef chasing a fish, while an impossibly long stretch limousine passes in front of the boutique from time to time. Although the game utilizes just four locations, each features plenty of detail and smoothly animated characters.

Ultimately, the only disappointment to be found in The Apprentice is the slightly shoddy handling of parts of the license. Trump’s audio clips are brief and sound like they were recorded in a tin shack, while the team-based aspects of the show could’ve been played up more to create additional appeal for fans of the show. But as it stands, you don’t have to love the series to enjoy the game. And who knows? You might even hear the big man himself say, “You’re hired!” Hey, you can dream.

Defender of the Crown Review