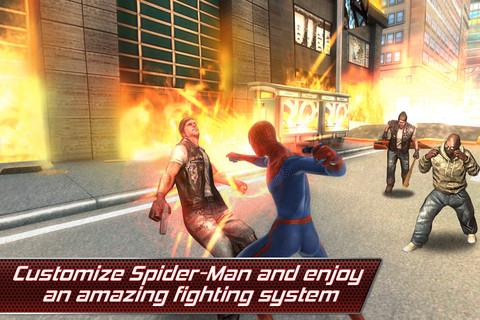 The Spider-Man gamefranchise, despite having a few hiccups in recent years, is a prestigious one to tackle. Not only are you dealing with one of the world’s most popular super heroes, but you’re also tasked with the huge undertaking of creating gameplay that makes you feel like you are the web-slinging wallcrawler himself.

In an attempt to create a huge open world for iOS, Gameloft’s The Amazing Spider-Man shares these huge ambitions. Yet, despite it’s giant scope, the end result is definitively weaker than their 2010 Spidey adventure , Spider-Man: Total Mayhem.

The main concept of The Amazing Spider-Man plays like the best of film-to-game adaptations: it keeps the main story intact, while leaving plenty of room open to create its own adventure. You play in the shoes of a once-again rebooted Peter Parker, aligning loosely with the new film’s plot concerning Dr. Curt Connors and his transformation into The Lizard villain.

In the meantime, New York City is bigger than ever before, rivaling (but not surpassing) some of the largest open-world settings on the iOS, such as Gran Theft Auto. Swinging from webs is no longer restricted to the “on rails” formula of Total Mayhem, giving you complete control to zip, swing, and crawl across the city skyline.

Like the real Spider-Man (you know, if he was real) you’re free to explore the city and solve petty crimes whenever you like. There’s a fairly linear progression of story missions, but you’re by no means inclined to do so at any time.

The game’s extra missions themselves aren’t compelling or varied enough to warrant praise, but the end result of completing them is well worth it. By beating enough thugs and rescuing enough damsels in distress, you’ll level up and receive upgrade points. With well over 60 different skill trees to develop, such as bigger combos, stronger ranged attacks, faster running, or increased health, there’s plenty of reward for taking up Spider-Man’s routine crime fighting duties.

The main story itself is pretty lackluster. For one, the voice acting and writing is dreadful. I know that comic books are known for their ham-fisted and over-the-top dialogue, but combined with Parker’s painfully irritating voice actor, it’s simply a disaster.  Because characters don’t move their mouths when they talk, I found the clumsily assembled cutscenes worth skipping, anyways.

All storytelling problems aside, many of the missions verge on a frustrating level of difficulty. While the combat system (ripped entirely from Total Mayhem, but that’s a good thing) provides a fluent mix of melee, ranged attacks, and counter attacks, there’s a surprising amount of missions that require you to perform mundane tasks.

Get used to the phrase “diffuse the bomb”, because Spidey needs to down over a dozen over the course of his fairly short adventure. Also notably painful is the section where Spider-Man loses his powers, forcing you into some boring stealth-based missions. It has its share of good moments (such as diving off a building in order to catch a falling civilian), but the campaign, like a powerless Spider-Man, isn’t strong enough to hold its own. 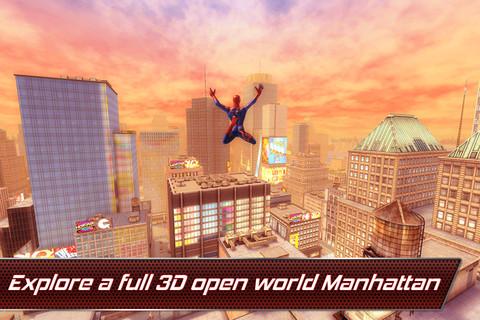 In addition to a few problems in mission design and presentation, there is one huge issue looming over The Amazing Spider-Man: it’s uglier than The Lizard himself. The titular Spider-Man is rendered decently, but everything else looks like it’s been filtered through a Nintendo 64. Blurred textures are commonplace, and most buildings won’t render completely until you’re right next to them (in one case, a building didn’t render until I had climbed halfway up it). In one section, where the city is covered in gas, you can physically see giant pixels “wiggling” all across the screen.

With another developer, it might be fair to take a pass and write off the poor visuals because of the game’s large scope, but this is Gameloft we’re talking about, here. With beautiful titles like N.O.V.A 3, we know what they’re capable of. Even Gameloft’s two-year-old Total Mayhem backed its own weaker textures with bright and colorful comic-book style visuals. This new Spider-Man, forced to use a realistic style to match the film, looks messier than a tangled web.

As my wise old uncle Ben (what, I can’t have one, too?) once told me before he died, “with great franchises comes great responsibility.” With Spider-Man, creating a title that lets you become the hero is extraordinarily difficult. In Gameloft’s case, they’ve got the combat and web-slinging down. With everything else? It looks like The Lizard’s poison gas seeped into the game’s system.

If you want an open-world Spider-Man title, The Amazing Spider-Man delivers a decent experience along with a slew of flaws. However, if you’re simply looking for a smooth Spidey adventure, stick with Total Mayhem.