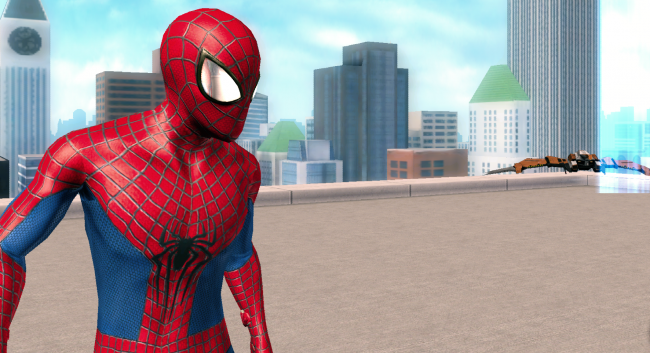 Does Whatever a Spider Can

Like a girl who can’t help dating bad boys, I’ve had my heart broken by Gameloft super hero titles before. More than once, in fact. So I went into The Amazing Spider-Man 2 fully prepared to be let down again, only to find that it’s really good. With slightly tighter controls, it could even be fantastic. Or amazing, if we want to keep the right adjectives with their respective franchises.

One thing that sets this game apart from its Gameloft brethren is that there’s no genre confusion. The Amazing Spider-Man 2 is unabashedly an action-adventure game, thrilling in the freedom that the web-spinner has at swinging through New York and showing off his acrobatic skills at every chance.

Spidey’s objectives in each level are a mix of open world encounters and planned events that drive the narrative. Thanks to a gang war that is engulfing New York, there’s no shortage of random crimes to stop, and the random missions do a good job mixing things up. You’ll find yourself stopping robberies, taking injured police officers to the hospital by webline and simply signing the occasional autograph for starstruck citizens.

When criminals try getting down and dirty, combat is like a simplified version of what Batman goes through in the Arkham console games. You’ve got web and melee buttons, plus a reversal button that requires proper timing to use properly. It doesn’t take long to pull off some impressive combos, which the game encourages with a meter and increased rewards for long chains. Skills can be leveled up with coins earned during play, allowing for some tailoring of Spider-Man to your specific play style.

The boss battles have different mechanics, but the game always explains them ahead of time so you don’t get hung out to dry. Even the one at the end of the very first level is challenging, as you have to weaken Electro while dodging his attacks, follow him through the city without losing him and win a final confrontation atop a building. You don’t need Spider-Sense to realize there may be some mild spoilers for the movie of the same name, but we won’t know for sure until May.

Really, the only issue with the core gameplay is the imprecision of the controls when you’re maneuvering around the city. There’s a jump button to get some air, and holding it down will shoot out webbing so you can swing. It takes a little time to get used to the rhythm needed to let one line go and shoot another one, but once you figure it out, it’s not a big deal (plus Peter had developed the power to fall from any distance without hurting himself).

The same can’t be said for the virtual thumbstick, which simply doesn’t let Spider-Man change directions too nimbly. Some strange camera angles exacerbate the problem at times, though you can hold anywhere on the screen and drag to change the perspective at any time.

This still ranks as more of an annoyance than a game-breaker, but it’s easy to forget that on the missions that have you racing the clock. Someday we’ll live in a world without the virtual stick, but it seems to be a necessary evil until then.

Gameloft has always come correct on the visuals of its Marvel games even when other aspects have disappointed, and The Amazing Spider-Man 2 continues that success. Spidey and all of his villains look excellent, as do the urban environments through which you swing. There are cool little touches sprinkled throughout, like the storm clouds that gather when you’re getting close to uncovering Electro. The music and voice-acted dialogue aren’t too shabby either. 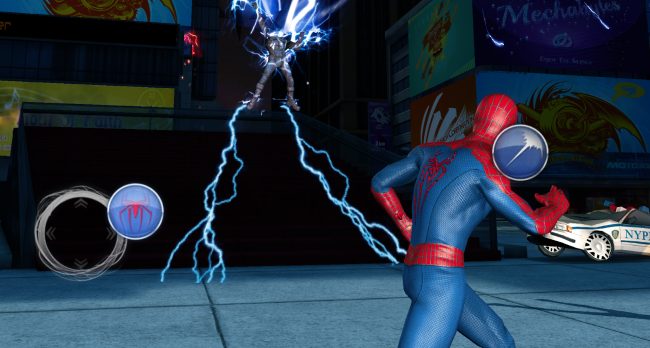 There seems like some nice extended play value, as there are villains beyond those starring in the movie, and arena mode and regular events. You can also unlock multiple Spider-Man costumes that comic book fans will really appreciate, but some are easiest to obtain through in-app purchases — possibly a little greedy for a game that already costs money to download.

This time, though, you actually get some bang for your mobile buck. If you’re reading this, Gameloft, the comic geek in me isn’t saying that all is forgiven, but he’s happy you’ve done right by the wall-crawler. When you have some time, Thor and Captain America would like to talk to you about doing the same for them next time around.