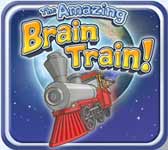 Advocates of video and computer games have made innumerable claims about the benefits of interactive entertainment. From easing the pain of cancer to improving hand eye coordination, games are said to be good for more than sucking away your free time and emptying your bank account. Now some are arguing that a new category of games can actually sharpen your acuity through mental exercises. Grubby Games, creators of the Professor Fizzwizzle series, tackles the genre with their latest release: The Amazing Brain Train!

If you didn’t get the clever play on words in the title, then this game is for you. But don’t worry. Once you master the 15 mini-games that come with Brain Train, you’ll be able to bid farewell to the days of smiling and nodding when you’re actually the only one in the room without a clue. I say this out of hope, not experience…

Brain Train is split into three modes: Quest, Test and Practice. In Quest mode, you play mini-games to fuel the titular Brain Train. This allows you to travel from one destination to another while completing missions for the various animals that populate the Fizzwizzle universe. Along the way, you’ll unlocking new destinations and additional mini-games.

For example, one early quest has you transporting clothespins to the friends of Ralph the Skunk, who’s feeling lonely and could use some company. By the time I’d completed this quest, I’d played nine of the mini-games and unlocked a tenth. Although your mileage will vary in terms of how quickly you unlock the mini-games, in general, this process is too easy.

In Quest mode, the mini-games are timed and scored according to the number of puzzles you solved minus the ones you got wrong. That’s not necessarily the case in Practice Mode, in which you can play any of the mini-games you’ve unlocked to your heart’s content with or without a time limit. In Test mode, you play through a random selection of five mini-games and are given a letter grade based on your performance. Like school, you can excel in one class, blow chunks in another and still bring home a decent GPA.

Grubby Games did a good job of coming up with modes that would appeal to every age and skill level, but did they come up with decent mini-games? Better than decent. MUCH better.

Each mini-game falls into one of five categories of drills: search, planning, spatial, memory or numbers. While describing all of the mini-games is beyond the scope of this review, I’ll give you a sample from each group:

Cosmic Cubes is a spatial drill that challenges you to look at a rotating cube consisting of several squares of different colors and determine what Professor Fizzwizzle is seeing as he looks at the cube head-on.

Frozen Fruit Finder is a planning game in which you must grab all of the fruit on a frozen lake by sliding a monkey from piece to piece. If you make a move without grabbing anything, you lose.

Monkey Mayhem is a numbers game in which you keep track of how many monkeys there are in two or more bushes. It sounds easy, doesn’t it? Once you’ve got several bushes on the screen and multiple monkeys darting between them, you’ll change your tune real quick!

Newcomer is a memory game in which you’re shown a selection of animals, numbers and shapes, then they’re hidden behind closed doors, then all of the doors plus one more open, and you must identify the newcomer.

Birthday Cake Shuffle is a search game in which you must slide the pieces on a game board in such a way that you create an open path from the professor to his birthday cake. In all, the mini-games cover a broad scope of mental gymnastics, include both new ideas and old favorites and are great fun to play.

Since the goal of Brain Train is add muscle tone to your gray matter, the puzzles in each mode start out easy and get harder as you solve them. In Quest and Test mode, you’re really pressed to think not only correctly but also quickly. In Practice mode, you can reset the difficulty to easy if things get too tough.

Coming on the heels of the previous Professor Fizzwizzle games, it goes without saying that the presentation in Brain Train is second to none — but I’m going to say it anyway. The graphics are just as colorful as you’d expect given the look of the previous Fizzwizzle games, but truth be told, artist Matt Parry has outdone himself. From the animation of Fizzwizzle hitting a baseball in Brain Ball to the way your performance is scored by a brain ringing the bell on a high striker (like you see people doing at carnivals), the visuals are outstanding. And the interface is so straightforward and easy on the eyes, you’ll be in and playing in no time.

Quite simply, The Amazing Brain Train! is a work of genius. Whether or not it turns you into one remains to be seen. All I know is I’ve got a house full of people begging me to polish off this review so they can play the game, but I’ve grown smart enough to tell them I’ve got more play testing to do.