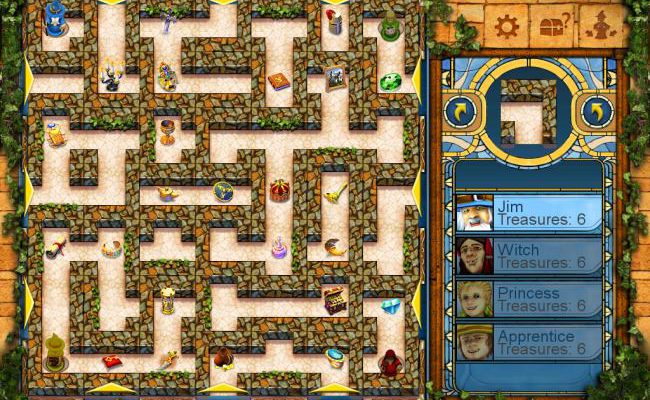 THE aMAZEing Labyrinth lives up to it’s name

When it comes to family game night around my house, there are a few games that always seem to be in heavy rotation. Kids of Carcassonne is one. Hey, That’s My Fish! is another. But if there’s one game that seems to get more play time with my kids at the kitchen table each week than any other, it has to be The aMAZEing Labyrinth. And now that it’s on the iPad? It’s even better.

“But how,” you must be asking, “can a digital version of a board game be better than the real thing?” By offering up much, much more than the original board game ever could.

Alongside the gameplay The aMAZEing Labyrinth, this app also features another game in the series, Labyrinth: The Duel, as well as a wonderfully unique collection of single player puzzles created using the basics of aMAZEing‘s gameplay.

“But what,” the uninitiated amongst you must be asking, “is The aMAZEing Labyrinth?” A board game released back in 1986, The aMAZEing Labyrinth is the mother of all sliding puzzles. Up to four players will sit around a table controlling a fantasy character that is in search of treasure. To get to their particular treasure, they must create a path through a maze. To do this, they’ll slide a square tile onto the board that will move an entire row of tiles with it, pushing another tile off of the other end of the board (thereby creating the next tile piece for the next player). Players will need to plan carefully and look at all of their options, as the moves opponents make will often throw your plans into a tizzy.

The aMAZEing Labyrinth is a game that naturally lends itself to touch screen devices, and yet the execution here is so good that it’s on a level with CodingMonkey’s adaptation of Carcassonne. Playing pieces like wizards and princesses are presented as gorgeous 3D models with terrific little animations. Sliding new pieces in is a cinch, as is rotating them to face the direction you’d like. All of this is presented on a background of vine and brick, complete with a musical score that sounds straight out of an 80’s fantasy epic. It’s simply marvellous.

Labyrinth Duel is similar in spirit, but different in gameplay. Two players are pitted against each other in their own grid of 16 tile spots. Along the edges are 16 different treasures, and players are tasked with being the first to get a specific 8 of them. There’s no extra piece to slide in and out here – instead it’s a more traditional sliding puzzle format – 16 tile spots with only 15 tiles, letting you maneuver into the empty space to create new pathways. Unlike the turned based nature of aMAZEing, this mode is all about speed. Whoever can think faster can play faster, and ultimately, win faster. 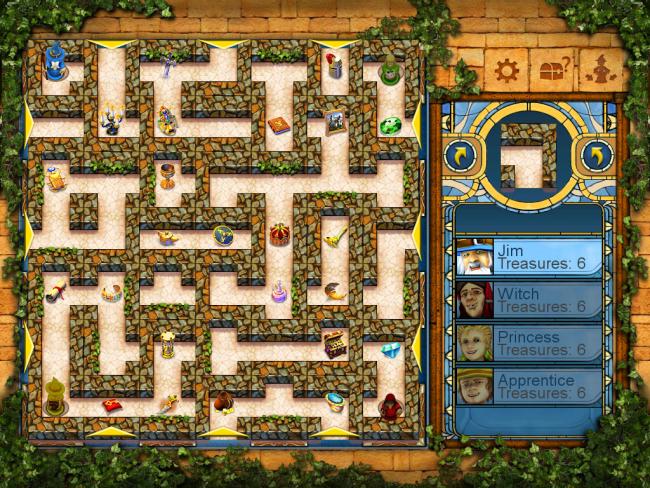 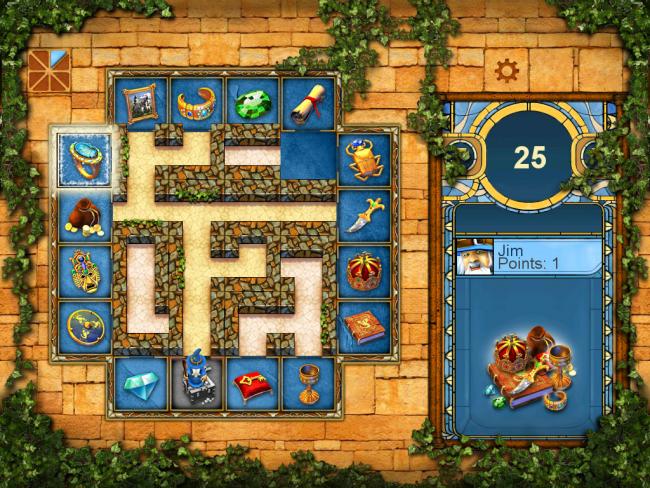 And yet, there’s one glaring problem that can’t be overlooked. If you’re buying this because you want that classic aMAZEing experience, you’re going to need friends. There are no AI opponents to be had, and while you can play online with strangers, finding someone to play with can be something of a chore. The local multiplayer is tremendous, offering a faithful recreation of the tabletop experience – but there’s no way to recreate that experience without another human player.

Still – since aMAZEing is really only a third of the app, there’s plenty of fun to be had elsewhere. The single player puzzles based on aMAZEing are plentiful, and task you to look at a pre-arranged scenario and connect your wizard to their treasure in only so many moves. And while the traditional play of Duel suffers the same lack of AI, it’s a game that lends itself nicely to the timed single player variant that is found here. In fact, single player Duel is where I’ve ended up spending most of my time. It’s perfect for a quick few minutes of play, as it doesn’t demand the lengthier session that a multiplayer game of aMAZEing might.

On the one hand, the breadth of this package is incredible. It’s not just The aMAZEing Labyrinth as the title suggests, but three totally unique games in one – any of which Ravensburger could have succeeded in selling as a standalone app. On the other hand, the lack of AI opponents is simply inexcusable. The single player options here are terrific, but without an AI opponent, the multiplayer options are locked away from players looking to get the traditional aMAZEing Labyrinth or Labyrinth Duel experience while playing by themselves.