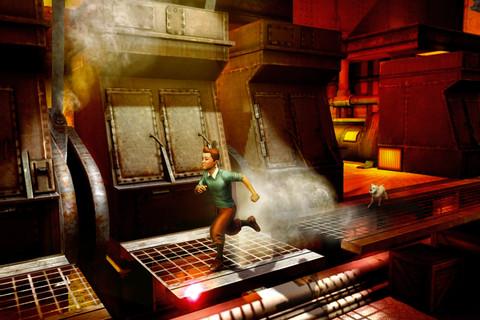 I’ve got a confession: Tintin helped teach me to read. My parents, desperate to get me to away from the television, realized that I was a sucker for comic books. Unfortunately, comics in the 1980s and 90s weren’t exactly quality literature; when my folks realized that the Adventures of Tintin books were better reading material than the latest issues of Bloodshot and Youngblood, they bought out the local bookstore. By the time I was ten, I’d read the entire series.

As a result, I’ve been looking forward to the new movie from Steven Spielberg, but not the tie-in game for iOS devices. After all, we all know that licensed games tend to be rubbish. That said, The Adventures of Tintin from Gameloft manages to completely buck this trend because (surprise!) it’s amazing.

The game closely follows the plot of the movie. In the interest of too many spoilers, things start out when Tintin and his dog Snowy find a model ship that is the centerpiece of a mystery worthy of Indiana Jones. Throughout the adventure, you’ll switch between controlling Tintin, Snowy, and Captain Haddock.

The Adventures of Tintin is divided into chapters. These chapters are actually a series of minigames that seem to flow into one another. Here’s a small example of how this works: At one point in the first level, Tintin has to outrun a hungry guard dog, followed by a cut-the-rope sequence of physics puzzlers in order to scare away some nearby rats (because Snowy won’t go near them). After this, Tintin must climb the exterior of a mansion, which consists of some stealth-platforming gameplay. Once he climbs inside an open window, you have to sneak him through a guard-dog laden room (more stealth mechanics) before he can get explore the mansion and steal a key from a bumbling butler (that consists of a series of quicktime events). This whole sequence represents about ten minutes of the game; the overall title actually takes a few hours to beat.

One of the game’s biggest strengths is that gameplay never really feels old, since the different minigames consist of various elements and things are changed on a pretty regular basis. On top of that, the games all flow into one another while constantly furthering the adventure. Not only that, but it’s is both simple-to-learn and features amazingly solid mechanics.

There’s also an exploration system in the game that rewards you for looking around and watching the various cutscenes. Each chapter contains a certain number of coins and puzzle pieces for you to pick up by tapping on them. Generally it’s pretty easy to find those that are present during the actual gameplay (though, admittedly, you’ll have to check out a couple of corners to find some), but there are a number that you’ll only be able to snag if you actually watch all the cutscenes. It’s an amazingly simple little mechanic that adds a lot of replay value to the title.

You’ll want to watch the cutscenes, too. Like the rest of the game, they all look and sound magnificent. The cutscenes themselves alternate between full-on movies and scrapbook photos that still are voiced. The game, meanwhile, features PC-quality third person graphics and wonderful audio (including some truly excellent voice-acting).

Gameloft’s pulled out all the stops this time, and the result is a masterpiece of an adventure game, one that combines the point-and-click adventure elements with the best uses of an iOS device’s attributes. The Adventures of Tintin is the rarest of creatures: A movie tie-in that happens to be excellent. Pick this one up, folks. You won’t regret it.