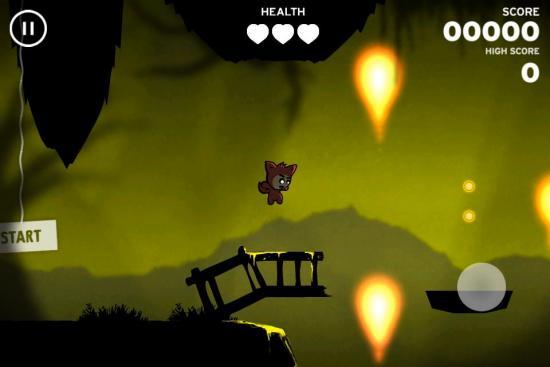 The Adventures of Timmy: Run Kitty Run is a little too old school for it’s own good

Remember the games of yesteryear? The ones that often led to the throwing and breaking of game controllers? The new iOS game from CB Labs, The Adventures of Timmy: Run Kitty Run, is a platformer that fits in with them perfectly. Depending on the player, this might be a good or bad thing, but for most, this will lean towards the latter. Though the game has a beautiful art style to it, and looks great on all fronts, the game is frustratingly difficult with much of the irritation stemming from sticky, unresponsive controls.

Run Kitty Run centers itself around a shy, cat suit wearing kid named Timmy who is frequently made fun of. His troubles seem to reach an end when he is befriended by a girl named Kitty. Unfortunately, she is immediately spirited away by the biggest bully of the school, Mitch, and it’s up to Timmy to don his cat costume and save her in a very Mario’esque fashion.

The core of the game is platforming. Players move through relatively short levels, avoiding pits of spikes and monstrous creatures along the way. Like the original Mario games of Nintendo and Super Nintendo, players collect coins and jump on enemies to boost their score, earning up to three stars per level based on how well they do. Should the player touch an enemy anywhere but on the top of its head, they will lose one heart of health. This is where the “fun” begins.

Run Kitty Run is hard. Frustratingly hard. And not always for the right reasons. Beyond being hit by enemies, health is lost when spikes are touched, and as levels progress, more and more pitfalls become part of the challenge. Eventually fireballs, moving obstacles, and pathing platforms become part of the adventure as well. Not too bad yet, right? Adding to the difficulty is that players only have three health hearts, meaning three mistakes and it’s game over – but if they land in spikes, it’s instant death. Moreover, there is typically only one health item (a heart that regenerates one health unit) hidden somewhere in the level.

So far, all can be forgiven, but this is where that controller inducing anger begins to bubble. The levels are fairly short… if done the first time. There are no check points. If the player dies, they start the entire level over again. Over, and over, and over again. It goes without saying that redoing the same content repeatedly becomes old very quickly, and in a gaming space where the most successful games are about accessibility and minimal frustration, CB Labs has made some poor decisions. This isn’t to say challenge is a bad thing. It’s good to have now and again, but the biggest contributor to Run Kitty Run’s challenge isn’t from game design, but from its wretchedly handled controls.

The game makes use of the common digital analog stick mechanic. On the left side of the screen is a virtual version of an analog stick and on the right is a single button for jumping. Typically, when any form of stick movement is involved in control, there are variations of tilt to control speed. This means that if its pressed all the way in one direction, the avatar runs, and if only slightly, it walks. Not the case here. Timmy goes from standing to full run in one go, and the sensitivity is horrid. For example, players may need to make a small jump to a small platform, but have to push the control stick all the way over, thus overshooting their target and trying to spastically compensate by moving the control stick back the opposite direction (Timmy can move while in the air). Additionally, there feels like there is a split second delay in game response time. This lack of precision becomes especially aggravating when performing sequences that require wall jumping between two walls, as it requires users to switch directions quickly, before they begin sliding back down. 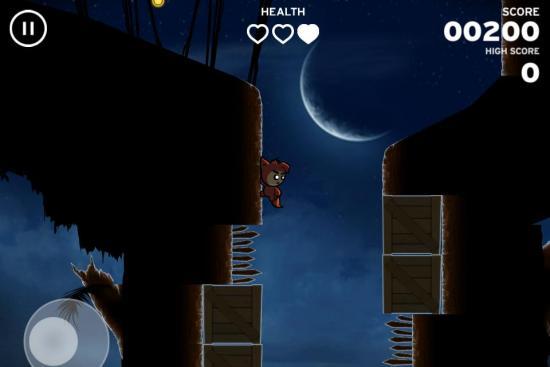 The only redeeming factor that Run Kitty Run has is its visual style. The game may be a poorly controlled iteration of Super Mario Bros., but it looks fantastic. Everything is highly stylized and looks like a product of Timmy’s nightmares. Fuzzy, pink bunnies transform into demonic creatures while crazed ghouls and ghosts try to put a halt to Timmy’s quest. Moreover, all of the levels have a muted, silhouetted aesthetic to them that feels a bit reminiscent of the indy game Limbo; just not completely black and white.

Overall, The Adventures of Timmy: Run Kitty Run is a game to watch out for. It looks great, but plays awful. The controls feel clunky and unresponsive, and there is virtually no precision for movement in a game that pretty much demands it. Couple this with an already difficult challenge and constantly having to restart levels, and it becomes far from recommended for anyone with high blood pressure. Unless one has a love for highly difficult titles, and a good warranty for their iPhone, Run Kitty Run is a title to pass on.