The Adventures of Fatman Review 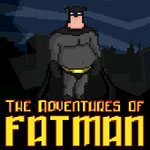 The term "old-school" often refers to a throwback to an earlier time, an earlier culture. The Adventures of Fatman, a game made in 2003 by Socko! Entertainment and re-distributed by Wadjet Eye Games doesn’t just feel old-school, it’s practically ancient! But don’t let the chunky graphics fool you; this is a hearty adventure, with a big, "fat" challenge.

The story starts out simply enough. You are Fatman, the greatest hero the city of Shadowlawn has ever known. In fact, you’ve done such a good job that there isn’t much left to do. One night, there is a mysterious explosion at the Acne Cosmetics Company, and the survivor of the "accident" has become horribly mutated. Going by the name of Toxicman, and the ability to ooze, transforming others into mutant zombies that obey his every command, Toxicman is out to rule the city. Fatman must stop this green menace!

Every cliché you can imagine is here in Fatman. The game doesn’t so much ride the fine line of copyright as it tramples on it. The opening music is note-for-note the opening of the 1989 Tim Burton Batman film. Fatman himself is an overweight, limp-eared Batman. Fatman’s car is the same model of car from the Burton film. He shops at a Quik E Mart (from the Simpsons) and is run by Abdul rather than Apu. And so on.

Rather than seen as a rip-off, though, Fatman parodies all our expectations of these super-hero epics, downplaying them to the point of ridiculousness. Fatman has no super-powers, only the power of deduction.

Being a point-and-click adventure, deduction is the main component to success in the game. However, unlike most current point-and-click games where your goals and direction are clear, Fatman is almost punishingly old-school. Basically, you must figure everything out yourself. There is no hint system, and it is very easy to miss a small detail on the screen which is an item that you absolutely must have.

You’ll be travelling from location to location in your Fatmobile, and there are about a dozen locations in the game. What gets cloying is having to go to one location just for one small item you may have missed, or to change outfits. For the latter, you have to go to the one place with a phonebooth in order to change, rather than your hideout, the Fatcave.

Other times, solutions don’t really make sense. For example, you have a pet hamster named Harvey. Harvey is in a bad mood, but you need him to work as a distraction in order to gain access to a secretary’s computer. What item would you think to entice him? If you thought cheese, you’re smarter than I am. Oh, and in order to get said cheese, you must open your Swiss army knife, cycle through the tools in it to get the knife, and slice a hunk of cheese that’s sitting on the counter in a pizzeria.

It’s this kind of obtuse solution that will likely scare away new players.

On the positive side, the developers were gracious enough to add a "replay" button should you do something which kills Fatman. Which you’ll do. A lot. These old-school games were not designed for the faint of heart, but you won’t have to backtrack too far to re-try the puzzle, something which would have been welcome in the 1990s.

The developers have definitely gone out of their way to evoke the style of that age. The graphics are chunky sprites, resembling characters from games made by LucasArts in the 1990s. The music matches the graphics, sounding like it was generated by a primitive soundcard from the era. Again, it’s not "bad" but it’s nothing like the sweeping scores we have come to expect nowadays. It all adds to the feeling of nostalgia, though.

The other interesting addition to the game is some limited voice acting. It’s apparent that there were no professionals hired to do this game. As such, the delivery of the lines is hit-and-miss. Fatman sounds appropriately dorky, and Toxicman sounds like an average Joe who was in a horrible accident (which he was). But the supporting characters aren’t terribly convincing, and the main voiceover guy has trouble with syllabification ("dermatologist" get mangled into "derma-toe-LO-gist").

To make a game that is unapologetically old-school is a brave design choice, and for the most part, Socko! nails the feeling just right. It’s a fun game, and especially fun if you lived through the 90s point-and-click game era. However, a little less direct homage and more embracing of some of gaming’s more modern evolutions would go a long way to opening up Fatman to a wider audience.