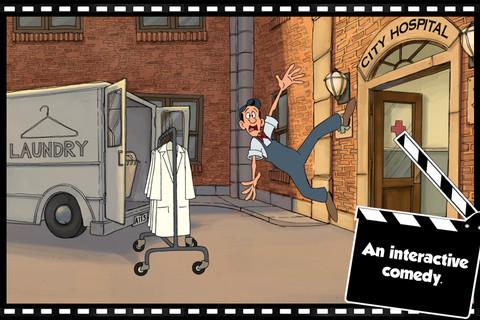 All the world’s a stage… but is it well constructed?

The Actis one of those games that just breaks your heart when you’re forced to rate it as anything less than perfect—and it really shatters you when big problems with the mechanics keep you from even ranking it as “great.” The Act is lovingly presented and is storyboarded well, paying strong tribute to the Laserdisc games of olde, but despite some attempts at genre innovation, it’s a frustrating game to muddle through.

The Act opens up by introducing you to its protagonist, Edgar. Edgar is a down-on-his-luck window washer who tries to scratch together a living while keeping an eye on his simple brother (and partner), Wally. When Edgar turns his back on Wally for a second, the big guy climbs inside one of the hospital windows he’s washing, and with the help of a comedy of errors, is mixed up with a patient who’s scheduled to receive a brain transplant. To make things just a little more complicated, Edgar lays eyes on one of the hospital’s nurses, and is immediately bitten by the love bug.

Thus begins Edgar’s quest to infiltrate the hospital, rescue his brother, and hook up with the little lady if it’s in the cards. Security won’t allow Edgar to just walk into the hospital, though, so he disguises himself as a doctor to get where he’s going. Needless to say, when you wear a doctor’s coat in a hospital, people expect you to do things (sheesh, demanding lot), so Edgar has to fake his way through the day. He also has to fake being suave for his love interest, when/if he gets that far. 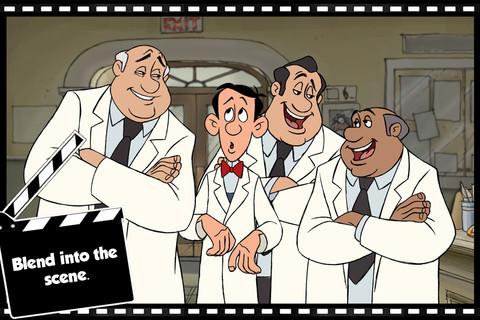 You help him out by swiping left or right on the iOS screen during certain cues. Intensity counts, though: if you swipe too quickly, Edgar might trip over himself and mess up the scene. On the other hand, if he dallies and moves too slowly, his opportunity to act might slip away.

The Act is beautifully animated, and is a joy to watch, but it’s tricky to play through because it’s never explicitly clear on how you’re supposed to move. When you screw up, the game tells you, “No, no, move this way,” or, “Move more gently.” Even if you follow those directions, though, you’re still bound to fail because it’s rarely clear from the outset if you’re swiping in the right direction, and/or with the right amount of gusto. 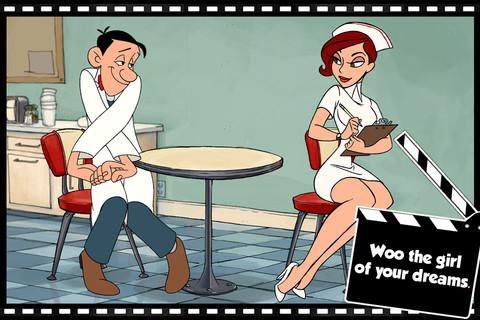 Unlike The Act‘s ancestor, Dragon’s Lair, there’s no flashing light to tell you, “All right, move now!” Sure, the idea is to rely on your intuition in The Act and move according to the characters’ body language, but more often than not, your intuition fails you and you have to re-do the entire scene. Even gorgeous animation gets tiresome to work through when you’re forced to make your way through the same scene over and over.

The Act strives to do a great thing by bringing new ideas and new blood to the full motion video/quick time event genre, but the execution is lacking. React Entertainment shouldn’t give up, though. Far from it. Some tweaks might help make The Act more satisfying to play, and we look forward to seeing how the studio will bring games and animation together in the future.