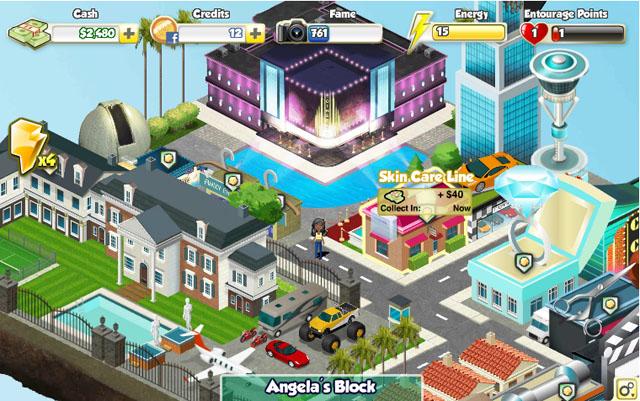 Many different Facebook games, in many different genres, have tried to embrace the theme of Hollywood celebrity. None of these games have captured the Hollywood feel as well as The A-List, a Facebook role-playing game where you take control of a budding actor or actress. You pursue a long series of quests that let you create and promote films, gathering up money, collectibles, and other items along the way. Your goal is to increase your fame level, which involves spending resources you’ve earned making films on a city-building portion of the game. The idea seems to be that you win by building up a luxurious Hollywood lifestyle.

The two portions of the game are almost completely separate, save for the odd building quest or the occasional reward that takes the form of buildings or decorations. The better of the game’s two portions is unquestionably the role-playing, which follows the basic Facebook RPG format. Instead of having to hunt through menus to find quests, you travel to different locations. Completing various quests lets you earn money, experience, and other items like collectibles or consumables. The quest text is written with a cunning sense of humor when it comes to the life of a Hollywood star, emphasizing PR opportunities and hunting down love interests as much as any actual film-making.

The movie-making aspect of the game ties in with The A-List‘s social mechanics, which are quite clever. Once you’ve made a film, you can opt to “release” it theaters and earn money from it for a period of three days. The game assigns every friend who is playing the game with you as a theater where you can opt to release your new movie. This lets The A-List have a typical Facebook mechanic that lets a player with more friends get ahead, but it’s one that a bit more novel than the usual visits or gifting.

The city-building portion of the game is very basic. Instead of a whole city, you’ve given a block to build up by adding buildings, businesses, luxuries like cars, and various decorations. You might expect the smaller scale to mean a bigger emphasis on adding little details to your houses and lawns, but The A-List uses an odd visual style that makes buildings rather smaller relative to your total building area than you might expect. So you can still build a variety of buildings and businesses with tons of space leftover for decorations and bling items. You particularly want to add lots of bling to your block, since these items give you the biggest fame boosts. 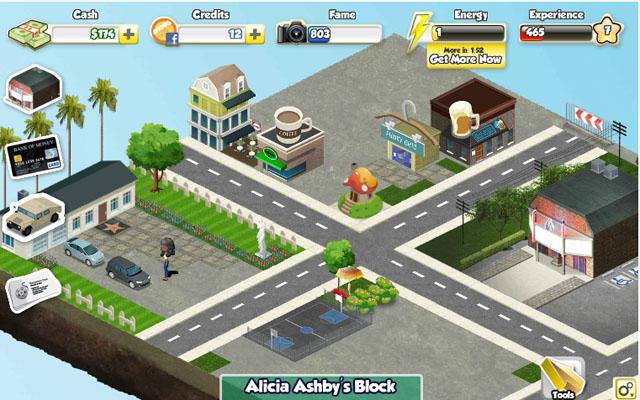 The A-List is a game worth checking out for the role playing portions alone, which really are cleverly conceived. It’s more fun to play with friends than solo, since that lets you do more with releasing your films, but a solo player won’t run into any basic problems with enjoying the game. City-building fans will probably find that half of the game disappointing, but there’s nothing actually wrong with it. If you view the city-building as a sideline to the role-playing, you can have a very satisfying experience with The A-List.