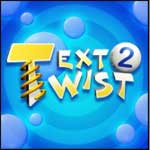 A sequel to one of the most popular (and most often imitated) word games of all time, Text Twist 2 introduces some new modes to its simple yet addictive gameplay formula, but it’s not enough to keep the title from feeling strangely barebones.

The premise is simple: at the beginning of each round you’re given a set of letters (six, seven or eight depending on which setting you’ve chosen) and you have to make as many words out of those letters as possible within the two-minute time limit. Words that contain every available letter are called BINGOs, and you must score at least one BINGO per round to advance to the next one.

Once you guess the BINGO word you can choose to keep playing to rack up more points, or advance immediately to the next round. You also get two free passes that will let you move to the next round even if you haven’t found a BINGO.

You can enter words either by clicking on each letter with the mouse or typing them with the keyboard (we found the latter method far easier), and if you get stuck you can press the "Twist" button (spacebar) to scramble the letters around in the hopes that a new word reveals itself.

There’s also an untimed mode for those who prefer to play without any pressure, as well as three other modes that each offer a slight variation on regular gameplay. Word of the Day is a single round that offers a new word each day and can only be played once per day. In Lightning mode you’re given five scrambled words and have to figure out what they all are before time runs out. Finally there’s Crossword mode, which is a bit misleading. You aren’t actually given clues to solve, but you do have to fill in a crossword-shaped grid of interlocking horizontal and vertical squares using words from the same set of letters.

Even with five modes to choose from, there just isn’t a whole lot of depth to Text Twist 2. Word geeks will find the gameplay as addictive as ever, but the presentation is bland and there’s little motivation to keep playing aside from racking up a high score or fulfilling the requirements to unlock 24 trophies, which include Dizzy (use "Twist" 5,000 times) and Bonkers for Bingos (complete only Bingo words for 20 levels in a row).

My biggest issue with the gameplay is that guessed words aren’t listed in alphabetical order, which makes it much harder to work out the words that you’ve missed. The game is also screaming for a multiplayer mode to challenge friends, whether online or in person, and the dictionary is a bit finicky – it recognized "crashers," for example, but not "crasher."

In light of the fact that there are word games offering a similar – and in some cases, more advanced – set of features that you can play for free online (such as the Facebook social game Word Twist), players should expect more from Text Twist 2. As it stands, the game is an ok, but not spectacular, word game in need of more depth and pizzazz.