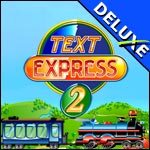 Wordsmiths looking for a new challenge after finishing Bookworm Adventures Deluxe should definitely take a spin with Text Express 2.

Zylom’s latest is a fun and frantic word creation game that builds upon hits like Text Twist, but adds multiple game modes, power-ups and, well, lots of trains.

Climb aboard, because it’s a blast.

In Text Express 2, you’re in charge of a train that makes its way to various stations around a huge and winding track. Your goal, as the conductor, is to reach each destination before your rival train. To “fuel” your locomotive with coal, you must create as many words as you can from six available letters. For example, you might see D, D, E, E, V, A and you can then use the keyboard or mouse to make words such as EVE, EVADE or EVADED. As long as there is a minimum of three letters, it will help push your train towards the next station. The faster you create words – I’d recommend using the keyboard instead of mouse for increased speed – and the longer the words, the faster you’ll get to where you’re going.

Aside from the moving train, this game mechanic will seem familiar to fans of the game Text Twist or Boggle. It is. In fact, Text Express 2, will show you a board with the total number of available words you can make in alphabetical order with underlined spots, which serve as a hint. Therefore, you might see _ _ _ _ before a completed word, like BOAR and notice you also have an E in your possession, so you can create BEAR. Get it?

Unlike Text Twist, however, power-ups begin to appear for playing well, such as a 2x or 3x multiplier on a piece of coal, so if you use that letter you’ll receive additional points. A small stopwatch means it will stall your opponent’s train for a few seconds so you can try to push ahead of it. A magnifying glass reveals some letters on the board for some extra help (e.g. by adding B to blank spots, so now it looks like “_ _ B _”). A rocket will double your speed for the next three words. Extra coins goes into your bank, which is used to purchase new tracks to new stations.

Another distinction is the ability to unlock new game types and rules. For example, after the first five stations or so, you’ll unlock “Replace,” so, instead of using the same six letters to create as many words as you can, the letters you use to replace a word and then replaced by a batch of all new letters. Other unlockable variations include unlocking seven letters to make words instead of six, anagrams (make words with all the letters provided) and other special missions we don’t want to give away here.

Players can also win awards by visiting every station in a level and connecting all the tracks between them. You can view these collectible awards at any time from the main menu.

Text Express 2 has one other issue, but thankfully it was only experienced twice in a few days of play: some letter batches repeated itself close together, such as seeing the letters “F, R, E, G, N, A,” for example, two times within a few minutes of one another.

Overall, however, this game is extraordinarily fun for word fans looking for a fast-paced mental challenge.