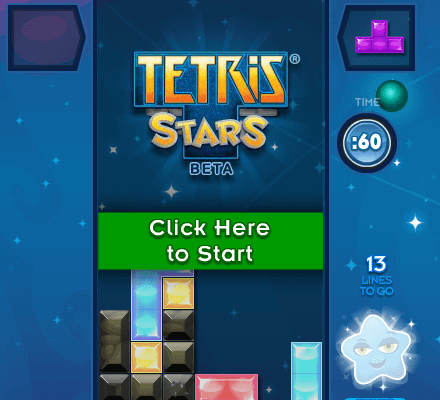 The original Tetris dates back to the Cold War. That means the franchise is practically a hundred in video game years. Tetris certainly boasts impressive longevity: its core concept is still as recognizable and as popular as it was in 1989, when the Game Boy pushed the word “Tetris” out into the mainstream.

Developers have had a lot of time to mold the Tetris formula to their liking. Some of those variations were forgettable at best (try to get your hands on 3D Tetris for the Virtual Boy), while others shine new light on the classic formula. Tetris Stars on Facebook isn’t the gaming universe’s most imaginative re-working of Tetris, but it’s fun, it’s satisfying to play, and it does a decent job balancing free content with its requests for microtransactions. 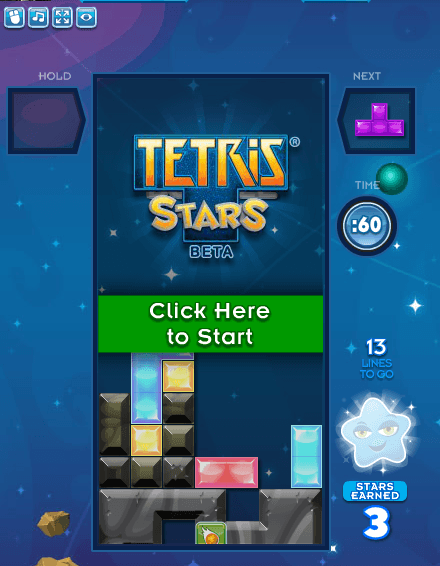 We’re all familiar with the basic premise of Tetris: make complete lines, preferably four at a time, out of differently-shaped blocks that fall from the sky. As they clear (again, preferably four at a time), you score points. Tetris Stars likewise revolves around clearing blocks, but there’s something underneath all those brightly-colored Tetrominos: layers of thick bedrock, and unfortunate Stars who are trapped inside of said bedrock. You must fit the falling Tetrominos into the stone foundation in order to clear it away and free your twinkly friends. The more Stars you free, the more levels you gain.

You must rescue as many Stars as possible (and dig “as low as you can go”) within an allotted amount of time, which keeps you on your toes from the outset. Freeing Stars also earns you coins, which can be used to buy power-ups. Playing Tetris with power-ups might seem weird; maybe even borderline perverse. But Tetris Stars threads said power-ups through the bedrock to keep the game’s action frantic and fun. Power-up blocks are triggered when they’re cleared away with lines, which has the addictive effect of turning a bad game on its head just as time runs out. Even a pile up of Tetrominos can be wiped out suddenly by a triggered bomb, or by the glorious fall of a rock power-up. Just when all seems lost, you’re suddenly awarded an extra ten seconds on the clock. 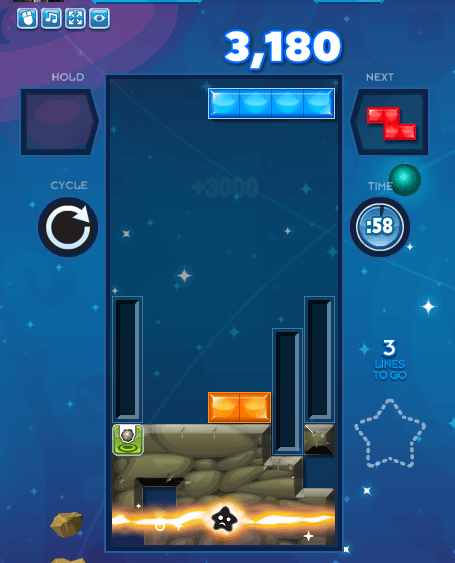 Tetris Stars is well-paced, too. You’re assigned a certain amount of “Energy” when you begin playing, and must spend one unit of Energy in order to start up a new game. Once you’ve spent what you have, you must buy more via microtransactions, or else wait until your Energy fills back up. Thankfully, you never have to wait very long, and Tetris Stars‘ quick tempo makes it easy to sneak in games around work and other activities.

Tetris Stars successfully combines social gaming’s point-and-click formula with other small pleasures that make life worth living, like block-stacking and the subsequent destruction of said blocks. If you’re constantly pulled between the urge to create and the urge to destroy, it will please you.