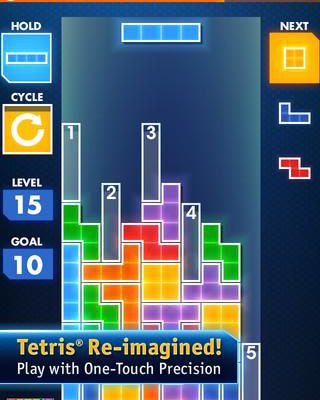 EA’s latest mobile Tetris is revolutionary, but bogged down by greedy microtransactions

Telling me that someone’s made fundamental changes to Tetris is likely to make me black out in anger. It’s such a stalwart game and an institution that mucking around with it would be akin to colorizing Citizen Kane or changing Star Wars (ok, bad example). But truth be told, Tetris‘ earlier move to touch devices hadn’t exactly been smooth, and changes were needed to make it enjoyable. This latest version succeeds enormously on that front, though with a huge caveat.

Touch-screens are great for certain types of games, but the precision needed for Tetris play never worked. Usually, it was just a recipe for frustration. But EA took the control scheme and threw it out the window, creating something they call “One-Touch.” 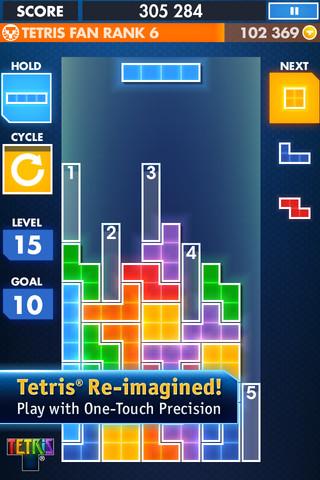 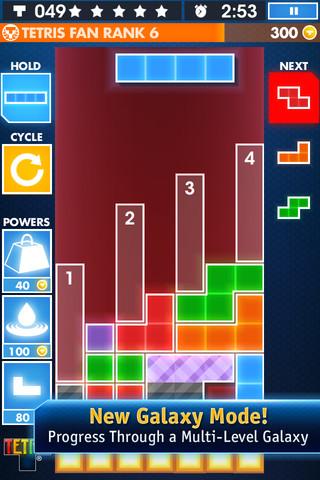 The change is simple: the piece you need to place floats at the top of the screen, and at the bottom there are four or five different outlines of where the piece could go. You tap the one you want and, poof, the piece goes there. If you don’t like your choices you can tap to get different ones. You have a limited amount of time to decide or the piece just falls down the center, and that time gets shorter and you level up.

I’ve played thousands of hours of Tetris in my life, so at this point I feel like something of an expert. I will say that at first it’s a truly weird control concept to wrap your head around – it kind of feels like cheating in a way. Tetris with training wheels. But once you level up and everything speeds up, you fall into the same zen-like state and you’re just going off muscle memory. It’s quite fantastic, and a perfect fit for touch-screens. It’ll never replace standard Tetris controls on standard controllers, but here, it’s mighty fine.

Sadly though, outside of the One-Touch game mode, EA’s new Tetris app really and truly falls apart. The “Marathon” game mode ditches the innovative gameplay mechanic of the One-Touch, and relies on sliding pieces around with your finger and swiping them to drop them. It doesn’t work at all, and even on level 1 I was misplacing and mis-rotating pieces. It’s an absolute mess and should be avoided at all costs. 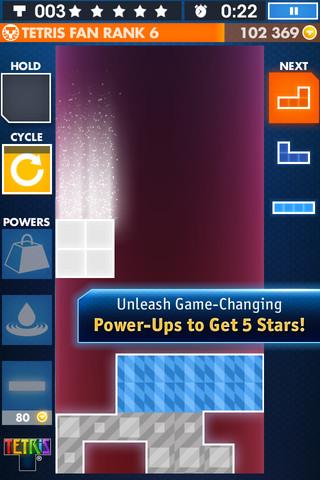 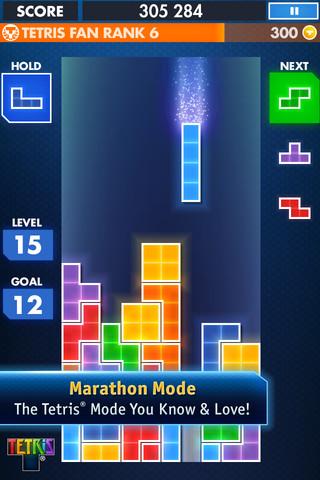 Then there’s the “Galaxy” mode, which is made of us various puzzles spread across different planets, each containing different challenges and levels. There are power-ups at your disposal, and a bunch of levels to unlock. It would be a lot of fun if it weren’t for the microtransaction albatross around its neck.

There’s an in-game currency called T-Coins that you can earn as you play which you’ll spend to use power-ups and buy more levels. The problem is that you don’t earn enough consistently, leading you towards what they want you to do – which is buy more T-Coins with your real dollars. There are options of buying T-Coins in increments from .99 to 99.99. It’s insane.

Then, on top of that, is the “T-Club” where they would like you to pay $2.99 a month or $29.99 a year to get access to “more t-coins and lines.” Let that sink in. They want you to pay a monthly fee to play Tetris. As a final nod to trying to wring as much out of you as humanly possible, there’s an every screen prompt to login to their online service called “Origin” to get exclusive content and automatic saves.

This version of Tetris is a truly hard one to score. I find the One-Touch mode to be a real game changer for Tetris on touch based devices. It’ll never replace good and true Tetris, but it’s truly awesome and a blast to play. But the other modes taint the entire experience. I’m totally fine with microtransactions, but here they just went too far. Luckily the one mode you really want to play – One-Touch – is free once you buy the app. If you just stick to that, you’ll find yourself pretty pleased with your purchase.