By Simon Reed | 7 months ago 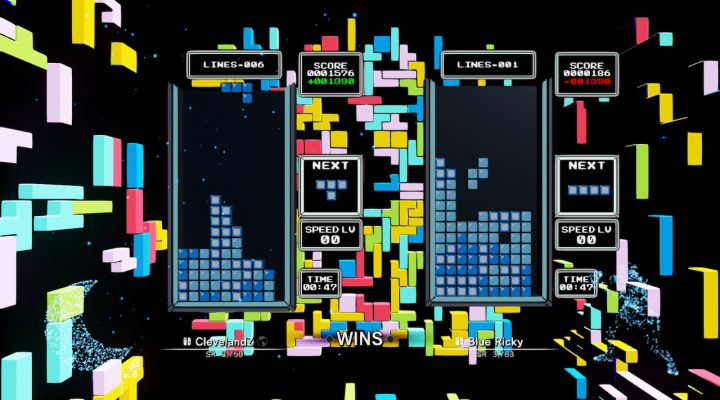 Tetris is the best puzzle game ever made. Tetris Effect, released on the PS4 and Xbox One in 2018 and 2019 respectively, was the best version of the title yet seen.

This Switch iteration improves on that edition. That’s all you really need to know.

Tetris is a perfectly designed puzzle game, and ever since it became a smash hit on the Game Boy no-one can rival it in the action puzzler arena. Columns, Puyo Puyo, Puzzle Bobble – all fine titles, but none have the absolute brutal beauty of Alexey Pajitnov’s creation.

Involving you assembling dropping bricks – seven types in total, all made of four blocks – into a well, once a vertical line is completed it disappears. The skill is clearing four lines at once – called a Tetris.

It’s compulsive, panic-inducing, and somehow soothing all at the same time. There have been few Tetris games that have managed to ruin the title’s perfect balance, and even those that have – including dreck like Magical Tetris Challenge and Tetris Worlds – haven’t been complete disasters. Which only proves how strong the core formula is.

And now along comes Tetris Effect: Connected. Which is the most immersive Tetris ever, thanks for a mix of heady visual design and superbly thought out multiplayer options.

It’s a version that includes all the standard modes you’d expect – Marathon, completing a set number of lines, seeing what score you can get in a limited timeframe – but then this adds its own wonderful takes on the game.

This includes a Journey option where you have to complete a set number of lines while the blocks change colour alongside a constantly morphing background and soundtrack. Now this might sound annoying. It’s not, and it’s amazing how it all falls into place as you play – pun intended.

Additions such as the Zone option – which can be used once a gauge is filled – aren’t as irritating as you’d imagine either. It freezes time, and cleared lines fall to the bottom of the well instead of disappearing – once the Zone gauge is depleted they’re removed and added to your score.

Mastering this is key to gaining the better scores, and actually adds another layer of strategy to a game we didn’t think had space for further improvement.

Played with headphones in handheld mode or on a HD TV, it’s almost impossible not to get whisked away while you play – regardless of your skill level.

There are some brilliantly judged multiplayer options added for this Switch iteration too. Ones which fully justify the addition of the Connected subtitle.

Added originally to the Xbox version of the game in 2020, it sees you team up with two other players against a computer AI. You have to work together as often your three wells join up, meaning you can’t simply focus on completing lines across your play area. It’s another brilliant twist on the core formula and cross-platform play means finding others to join you is simple.

There’s barely anything we can say against Tetris Effect: Connected. It’s a fantastically fresh take on a puzzler that refuses to age. This Switch iteration is the definitive way to play the game thanks to the handheld element too.

Cricket League Review – Hit For Six or a No Ball?