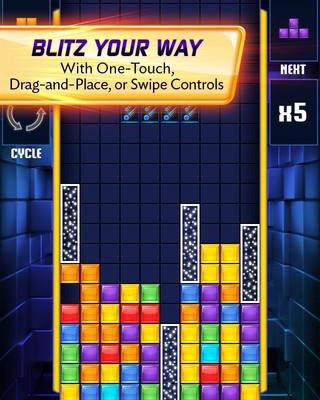 A Tetris reboot on touchscreen devices from Electronic Arts should by all accounts be a mess of awkward controls and microtransactions. Tetris Blitz retains little of the sentiment from the 1984 original, but inventive and frantic gameplay, mobile sensibilities, and cues from Pac-Man Championship Edition DX combine to make this the Tetris you want for the device you have. It also uses the word Tetriminos without irony. 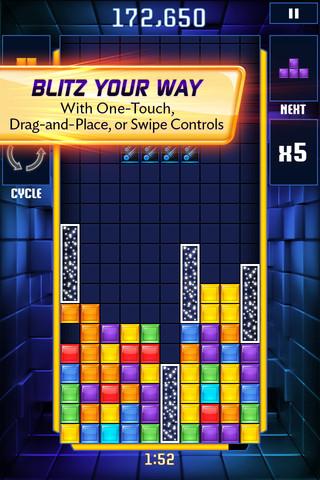 Tetris Blitz breaks Tetris’ potentially endless play into wild but easily consumable two-minute rounds. Your only goal is to score as many points as possible by forming lines quickly, triggering Frenzy Mode. This state continually fills the board from below with lines a block away from completion, your falling leftovers creating cascades of new lines that form for hilarious amounts of time. You have no control over setting up these cascades or even control of the game when they’re happening, but if you can continue to make lines quickly during Frenzy Mode, you can perpetuate it for the remainder of your two minutes.

It sounds like Tetris for the Modern Warfare generation, but not so fast. In a fashion similar to EA’s last mobile Tetris outing, Tetris Blitz makes the game playable on a touch screen, and for this achievement, all other sins are forgiven. Rather than tap or swipe your screen in a failed attempt at precision, Blitz provides you with several silhouettes on the screen- options of where you want the piece to go. Tapping the outline drops the block there, and while you still have the option to rotate, you’ll seldom take advantage of it. What Blitz’s system takes away in demand, it makes up for by affording you greater speed than the series has ever allowed. 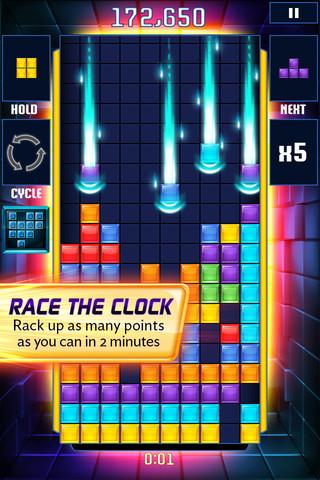 Tetris Blitz definitely contains some annoyances between the rounds, but fortunately they never break in to interrupt your game. Upon opening the app just now, I had to spin a prize wheel I didn’t care about, which then offered me the option to pay for more spins, then see an ad I had to manually click through, then be asked to connect to Facebook, then see the a la carte power-up of the week, then go through my standard list of power-ups before I could finally play. The power-ups are novel, like a magnet that pulls all the blocks to the left, but nothing to actually pay for.

Tetris needs no introduction, and this is the only version without a D-pad and A and B buttons that’s worth playing. It’s also free. For these reasons it’s an easy recommendation, even if the original’s charm has been replaced by neon and marketing.