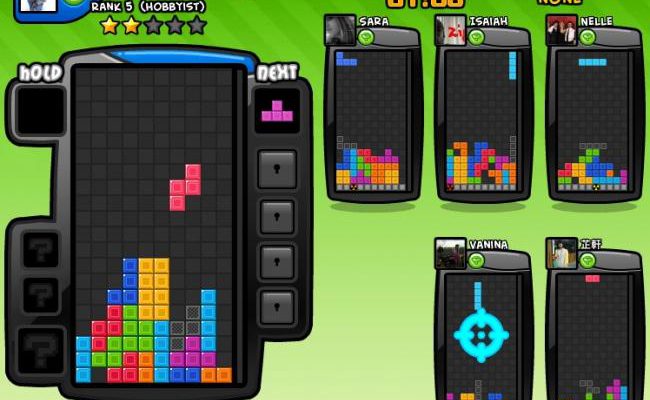 We’ve all played Tetris. Many, many times. The falling block puzzler is available on virtually every platform imaginable, so it’s surprising that it took this long before we had a proper version on Facebook. But the wait was worth it. Tetris Battle maintains the same basic formula that has made the series so enduring, but spices it up with new modes and a heavy focus on multiplayer.

Every round you play in Tetris Battle is against another player. You can choose to play either in two, four, or six player battles, each of which has its own rules and quirks. In the two-player mode, you have two minutes to clear away as many lines as possible. Who ever has the most when the timer reaches zero wins. But to make things even more interesting, the developers have introduced a series of “maps,” which take the form of pre-made stages already populated with blocks. The blocks are arranged in different patterns on each map, so each one has its own strategies. There’s quite a few, and they range from fun to very, very hard. 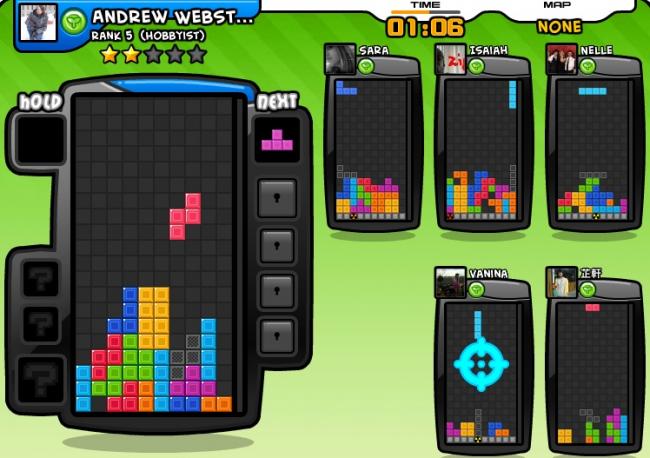 The six-player mode plays much the same, except for the time being you don’t have the option to choose different maps to play on. Four-player, meanwhile, provides a decidedly different experience. Instead of a race against the clock, it’s a race against your opponents. The goal is to be the first to clear 40 lines.

Tetris Battle has a great match-making system that always ensures you’re playing against similarly skilled opponents. You’ll move up the ranks as you win matches, but you’ll also move down after successive losses. And if you start man-handling your opponents, the game will actually suggest you move up to the next skill level. This ensures that you’re rarely severely outmatched, which creates a much more enjoyable experience overall. There are also, of course, leaderboards so that you can compare scores and ranking with friends and other players.

You’ll also earn experience and cash, much like in most games on Facebook, but there doesn’t seem to be much reason to do so at this point. The benefits to moving up in experience level appear non-existent. Money, meanwhile, can be used to by decorations like different colored/designed blocks, as well as to purchase specific upgrades. It also looks like there will be some sort of avatar component added in the future, but it wasn’t implemented as of this writing. 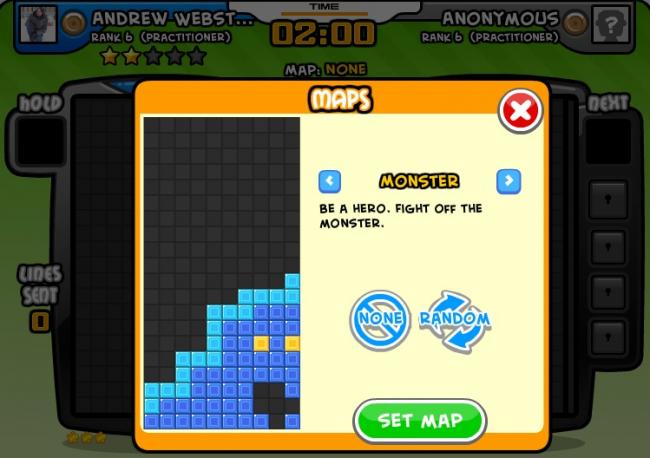 The game also uses the standard energy system, but it tends to be pretty generous. During our time with the game we never actually ran out, thanks in large part to the frequent level upgrades that refresh your energy. But because Tetris Battle is a Flash game, there are some technical issues that hamper the experience. This mostly relates to the visuals flickering. It’s intermittent, but when it gets bad the flickering can be very annoying, almost to the point that it makes the game more difficult to play.

Other than that, though, Tetris Battle is about exactly what you’d want from a social version of the iconic puzzle game. It’s still Tetris as you know and love it, but the new modes, social features, and multi-player component let you play the game in a new way. And the length of each game makes it perfect for playing in short spurts. Like when you’re supposed to be working or, maybe, writing a review.