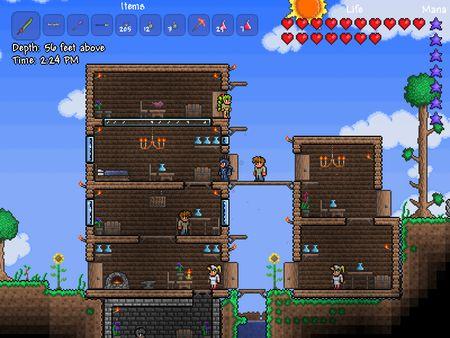 I’d really rather not be writing this review right now. I’ve just started a major remodel on my house, building more floors, a rooftop porch and bridges connecting open rooms that would make Frank Lloyd Wright proud. When day breaks there’s that secret entrance tunnel that needs expanding and I’m still gathering the materials for my new armor. So I’m sorry if this feels a bit rushed but I have much more important things to be doing. If you’d like to give me a hand, that would be great so grab a copy of Terraria and let’s get going!

Let’s get this unavoidable subject out of the way: Terraria is a 2D, side-scrolling version of Minecraft. Graphical differences are the major difference between the two but drawing comparisons is useless if you have no idea what either one is about. So what is Terraria?

Terraria is a game built around a never-ending carrot on a stick. You go around the world with some tools and a weapon exploring areas, defeating enemies and gathering material so that you can then craft those materials into better items so that you can explore more dangerous areas, gather rare materials and craft better items. You can build yourself a shelter, store items and set up your crafting tools. It’s wise to do so, in the day-to-night cycle that is constantly running in Terraria lots of bad things come out at night. Zombies, flying eyes…evil, bad things that want to hurt you. If you last until sunrise they will go away on their own so do your best to make it through the night.

The feeling of accomplishment you get from exploration, building and discovering in Terraria is as addictive as games give. When you’re digging through the caverns, swinging your pick axe like a wild man to carve your way and you come upon a treasure chest or large stash of ore you’re infected with a need to know what else might be waiting for you out there in the dark. The only detriment to finding your way as deep as possible is after you gather a good amount of rare materials and you want to rush back to you crafting station to see what new items might be available.

Unfortunately it takes a bit of research to get going on a proper path if you’re jumping into the game cold. There’s no in-game tutorial and despite some not-so-helpful tips from the “guide” NPC, Terraria can feel like trying to speak a forgotten tongue in a far away land if you don’t step off on the right foot. Despite it’s more “adventurous” feel (as compared to Minecraft) there’s absolutely no direction given to the player, but for most that’s part of the fun. The copious enemies populating the randomly-created worlds quickly become annoying to ward off, especially when coupled with the monotonous combat mechanics.

Picking apart the game mechanics is fair but it’s definitely not what makes Terraria such a special game. The thrill of having an entire, 16 bit-inspired sprite-filled world as your playground to do with what you please is exciting. Joining in with friends all on the same server adds to the fun as you populate the same persistent place at the same time, showing off your creations to each other and standing side-by-side fighting off the slimes and zombies.

Terraria is a game to get lost in. Let the things it’s trying to do happen and you’ll be rewarded for your patience and effort. Before you know it you’ll be sitting at your computer having lost hours of the day you didn’t know existed. In your chest, that you made, sitting in the house you built, will be the rewards of a hard day’s work. Though it will hardly feel like work at all.