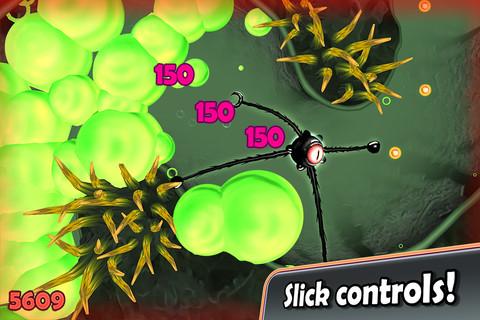 Tentacles isn’t as fun as frolicking in a pool of dolphin-headed scientists, but it’s still a solid game with a great premise.

If the Magic School Bus taught us anything, it’s that shrinking down to a microscopic size and going inside people’s bodies doesn’t yield any pretty sights. Tentacles: Enter the Dolphin is another story about a speck working its way through a gooey digestive system, and it confirms this much: the human body is a heck of a playground.

But the landscape in Enter the Dolphin is provided by one Dr. Phluff, a fellow who isn’t entirely human. He’s a mad scientist with a dolphin’s mug where his head should be thanks to his obsession with all things cute. When Phluff sets out to make the world’s most adorable octopus, he creates a bug-sized cyclopean horror show with four tentacles and a ravenous desire to kill and eat. As Phluff bellows his frustration, the monster, Lemmy, accidentally winds up in the doctor’s mouth and begins a long fight for survival and freedom.

Lemmy works his way through different regions of Phluff’s body, including the heart, the brain, and the bowels (ew). When you tap the screen, he shoots out a tentacle and latches onto the indicated object. By tapping over and over again, you help Lemmy pull himself on long hauls through Phluff’s veins and intestines.

There are 40 levels in all (you can buy more), and none of them are easy. You quickly encounter intestinal dentia, spinning spikes, moving platforms, and hostile lifeforms. Said lifeforms are fun to dispatch, as you get to rip their eyes out and eat ’em. Delicious!

Your performance is ranked on each level. You earn stars by completing a stage without dying, and by successfully working through challenges that require you to go through certain level segments without taking damage, or before a countdown expires. Some levels also challenge you to outrace a stream of acid that Phluff injects into himself to counter his invader (not a recommended medical treatment for anything, ever).

Tentacles: Enter the Dolphin is original (unless you’ve already played it on its native Windows phone), it looks great, and it’s fun—for the most part. The game is admittedly frustrating at times. The challenge level ramps up super-quickly, and having to repeat the same level sections over and over makes the game feel a lot less original in no time. It takes a while to really grasp how Lemmy moves, too. It’s a big job to keep those long, stretchy tentacles moving as a single entity. Sometimes Lemmy shoots out a tentacle at an object and misses even though you’d swear by Phluff’s dolphin head that you connected. The end result is a lot of injuries and death.

In other words, if you’re easily intimidated by difficult or frustrating games, you might be better off dosing yourself with acid than playing Tentacles: Enter the Dolphin. But if you like things rough, Tentacles is more than happy to challenge you.