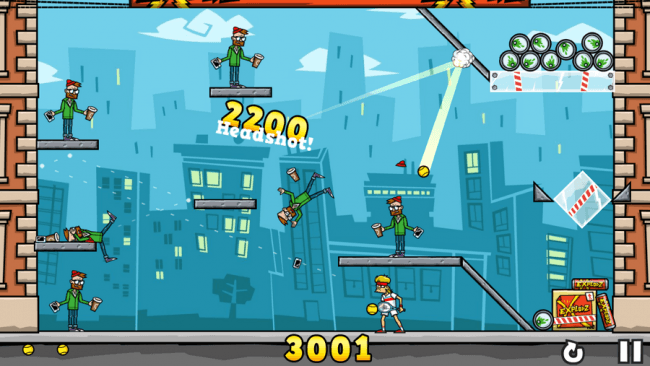 No doubt there are plenty of people who deserve a cranial readjustment courtesy of some sports equipment: movie patrons that leave their phones on, commuters who have full-volume conversations on the train, and anyone who gets more than three samples at a crowded Baskin Robbins.  For Tennis in the Face protagonist Pete Pagassi, that type of person is anyone affiliated with the creation, distribution, or consumption of Explodz Energy Drink.

As a fallen hero ruined by Explodz addiction, Pagassi has made it his goal in life to take down the company that did the same to his tennis career, and free the city’s Explodz-obsessed citizens from their energy drink stupor.  Setting his sights on the main Explodz factory, Pagassi must make his way towards the edge of town, knocking out anyone amped up enough to get in his way.

This includes cops who are trying to halt your rampage, consultants for the Explodz company, and even random consumers hallucinating that they are “Sir Wolfbrave,” Knight of Explodz, after drinking the new “Explodz Wolfspirit.”  Pagassi will need to take down everyone present in each physics-based level, knocking them out with painfully fast tennis ball serves, or occasionally tossing a volatile can of their beloved Explodz into the mix.  His tennis balls fly in a straight path but are extremely bouncy, allowing him to hit multiple targets in a row or even on opposite sides of a stage with a single serve.  The balls will stay in motion for about ten seconds before fizzling out, or until they hit an object that stops them cold—like breakable glass or scrap metal.  The Explodz cans Pagassi sometimes opts for—each stage is set up with a specific combination of balls and/or Explodz cans—fly in an arc, detonate in a small explosion after a few seconds, and are not limited by the same obstacles as the balls.

Each stage of Tennis in the Face will require you to use Pagassi’s limited number of projectiles to knock out all of his opponents in order to move on, often bouncing off walls, around corners, over obstacles, and into useful items for maximum face-smashing.  Many levels feature ingenious puzzle-like setups that can be used to your advantage, such as explosives hanging behind a breakable glass wall or a wooden plank ready to catapult a metallic drum into the air.  As long as your opponent is knocked out—whether it’s by a tennis ball, Explodz can, piece of debris, or even a flying body—it counts, and best utilizing these setups is a rewarding challenge.

Both personally, and in-game, that is.  Every level is scored based on how many projectiles you used, with the goal amount varying per stage.  If you meet the goal—whether it’s only using one ball, three, etc.—you’ll earn a gold crown for that stage.  Although a rating system is standard for physics puzzlers, achieving crowns on every level of Tennis in the Face is remarkably difficult yet extremely rewarding, since you have to really deduce the best approach possible—and then successfully implement it with precise aim.

Although aim is critical in Tennis in the Face, luck will play a factor, too, leading to the inevitable, occasional frustration.  Many stages’ Mouse Trap-esque setups are so minutely detailed and arranged that they will fail to go off unless hit in the exact right location.  For example, in one level, a drum needed to be blown by explosives across the stage and into a trendy male.  The way to make this happen was clear, and yet the drum consistently got caught in a small crevice and would not budge.  After about 20 times of completing the level the same way, the drum finally flew as it was supposed to, despite no changes on my part—I got lucky it happened to not get stuck. 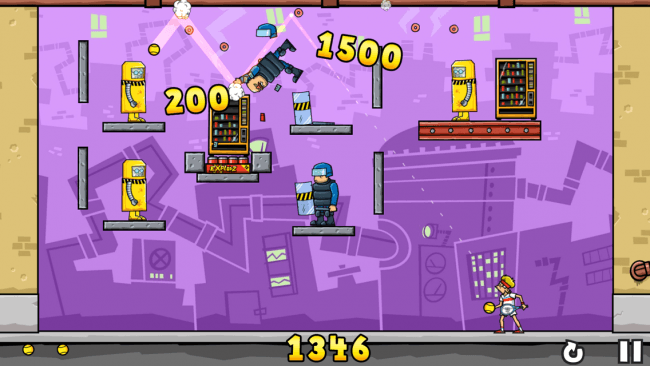 Part of this issue may be related to the fact that there’s so much going on in each level of Tennis in the Face: every opponent has items they hold (some for protection, like the police riot shield, and some for decoration, like the trendy male’s smartphone) which will go flying upon their demise.  The stage itself is often filled with glass, wood, explosives, and other debris.  Bodies may flop around once hit.  Sometimes this chaos helps in completing a level, but it’s also very easy for an object to end up out of place because it was struck by some random other item.  This busyness also extends outside of the stages themselves.  Besides the aforementioned crown grading system, you also earn a numerical score on each level based on how many opponents you strike with one serve, whether they were headshots, and if you struck other points-wielding items like vending machines.  There are also achievements available—like bounce a ball 100 times or earn a crown on every level in a district—that unlock special bonus stages with their own separate scores.  Even the main menu has a scoring system, albeit one you have little control over.  This mess of scores seems like a purposeful departure from King Oddball‘s extremely simple grading system, despite many other nods to its predecessor, including the map design, city’s name (Oddington), golden crowns, and a protagonist with a penchant for destruction.

Of course, with almost everything being purposefully ridiculous, over the top, and referential—I counted at least three different The Joker quotes from The Dark Knight coming out of Explodz-frenzied clowns—an excessive scoring system is somewhat at home.  10tons knows how to create a hilariously good time, complete with excellent level design, ridiculous characters (the “trendy males” wore shorts before they were cool, despite being shown in hipster skinny jeans), and an almost believable fake energy drink.  Tennis in the Face is one to play, and then replay for a higher score, and then replay for a different higher score, and then replay to serve tennis balls at the 10tons crew in the final level, as payback for all the hours you’re bound to lose to this ace.