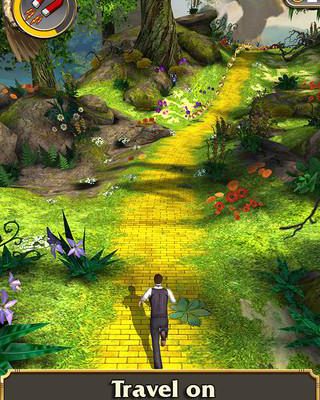 The Temple Run series has been a runaway success, with Temple Run 2 being downloaded over twenty million times in its first four days of availability. It’s no surprise then that there are pretenders to the throne. Pitfall, an ancestor without which Temple Run would never have existed, and even Sonic the Hedgehog have gotten into the third-person endless runner act.

Temple Run: Oz isn’t just the second spin-off of the Temple Run series, it’s the second to boast a Disney tie-in. Based on Disney’s upcoming Oz the Great and Powerful, the latest game in the series trades in Brave heroine Merida’s arrows for the wonderful wizard’s hot air balloons. Are yellow bricks and James Franco’s digital backside enough to warrant another run, or is this game a flying monkey to get off your back?

In spite of being based on one of the most beloved film franchises of all time, Temple Run: Oz features no exposition or dialogue whatsoever. Gameplay has taken the “if it ain’t broke, don’t fix it” approach. Swiping left or right turns, swiping up or down jumps or slides respectively, and tapping the screen activates power-ups. Relentlessly pursued by the flying monkeys, you’ll navigate the obstacles in your path ad nauseum until your brain lapses or the ever-increasing speed outpaces your fingers. The most obvious additions are the jaunts in your trusty hot air balloon. These flights of fancy are subdued and relaxing, starkly contrasting the breakneck pace of your ground game. In function, these rides are reminiscent of the secret cloud areas in Super Mario Bros. 3.

The latest Temple Run makes use of the same challenge system that was so successful in games like Jetpack Joyride and Punch Quest. Completing these challenges are the game’s real hook, and the moment their difficulty puts too much time between the dopamine hits is the moment you’ll stop playing.

Temple Run: Oz only features two areas, and as you continue on your yellow brick treadmill, you’ll endlessly alternate between them. Somehow this back and forth is worse than being allotted a single environ, though to be fair the game’s menu has placeholders for future locales. The best thing about Oz compared to Temple Run 2 is that its initial area, Whimsie Woods, is enjoyable to run through. It’s a bummer then that the Dark Woods, the game’s second zone, is atmospherically quite oppressive. 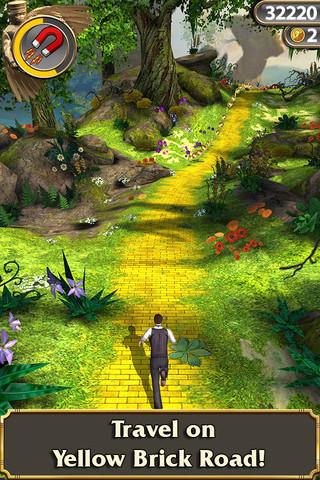 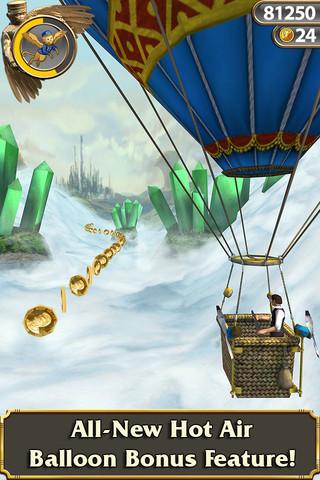 Temple Run 2 was maligned in some circles for its microtransactions, and that system is intact here. There’s nothing you can’t achieve with enough running, but busting out the real world wallet is certainly a shortcut to a more capable character. More egregious, there’s always a metaphorical open palm to be greased offering to pull you from the jaws of defeat.

What Temple Run: Oz really has going against it is that it’s more of exactly the same. The tried and true formula has already been done by three other games in the franchise and numerous clones and copycats. Personally, I also prefer my endless runners in 2D, both aesthetically and in terms of gameplay. The subtlety of Canabalt or the overflowing awesomeness of Runner2 surpass Oz’s 3D graphics, even if those 3D graphics are very good for a game on a phone.

Temple Run: Oz is just as good as Temple Run 2, but Temple Run 2 is free. Even if this is your first sprint with the series, you may as well get the entry you don’t have to pay for.