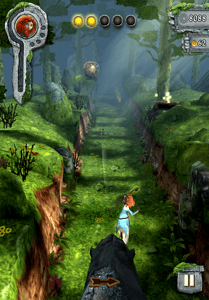 Temple Run: Brave is a tough game to review. It’s Temple Run, which I love, and it’s Pixar’s next movie, which I’m sure I will love. But at the same time, there’s really no denying that this is just Temple Run with a fresh coat of paint.

Fans of Imangi Studios’ immensely popular endless runner will be intimately familiar with (almost) everything Temple Run: Brave has to offer. Princess Merida, the hero of the upcoming Disney film Brave, runs, slides, jumps and ducks just as Guy Dangerous did before her. For the most part, the experience is a total cut and paste.

The only difference here is that Imangi have introduced a single new gameplay mechanic: archery. As Merida runs, she’ll occasionally engage in a mini-game that requires players to tap on the left and right of their screen to hit targets as they appear. Hit them all and you’ll get a score bump. It’s a simple enough process, but it’s hampered by some poor coloring choices. A muddy brown, The targets themselves can’t help but blend into their surroundings, making it all too easy to miss a target not because of poor reflexes, but because you simply didn’t notice it until it was too late.

The only other fresh elements to be found in Temple Run: Brave are purely cosmetic. This time around you’ll be traversing the wilds of Scotland instead of a Mayan jungle. Instead of monkeys chasing you, it’s the demon bear Moordu from the film. On the plus side, though, these cosmetic changes look really good. And not only is the game visually appealing, but the soundtrack is great too. It has a big, swooping score, no doubt ripped straight from the soundtrack of the film itself. And Merida’s voice clips too, though repetitive, can’t help but put a little smile on your face.

In the end, you really just have to ask yourself two questions: “do I really like Temple Run enough to download it twice?,” and “do I care enough about the movie Brave to purchase a movie tie-in game for it?” If the answer to either of those is yes, than Temple Run: Brave should be considered money well spent.

…and that’s not just a turn of phrase. 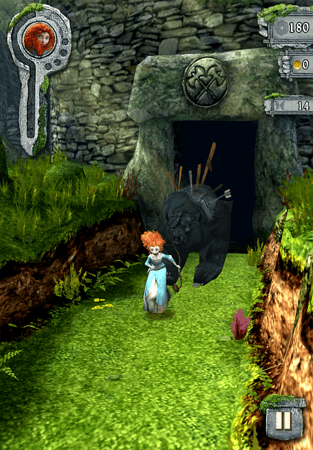 Unlike Temple Run, which is free, Temple Run: Brave has debuted for 99 cents. Considering that what we’re talking about is essentially the same game, that kind of makes Brave a tough pill to swallow. That said, you’ll be getting 99 cents worth of in-app currency as a result. And really – we’re talking less than a dollar here. Did you ever think we’d be living in a world where people thought 99 cents was too much to spend on a game? Maybe the economy is worse off than I thought.

Temple Run: Brave is exactly what you might assume from the title – nothing more, nothing less. As a fan of both Temple Run and Disney, this was an easy purchase in my books (and I’ve already gotten far more than my dollar’s worth of entertainment out of it). That said, if you’re looking for a licensed game that feels as fresh as similar releases like Angry Birds Rio or Fruit Ninja: Puss in Boots, you may walk away a bit disappointed. The archery is neat, but flawed, and isn’t nearly enough to set it apart from the original game.