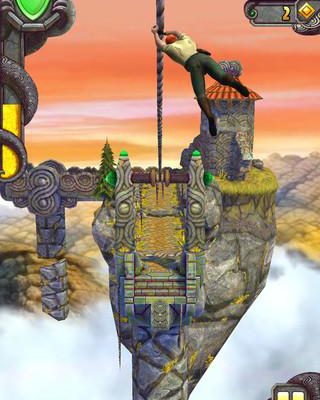 It’s like Temple Run, but a little bit better.

Have you ever read one of those reviews where you scratch your head and say “huh, I’m not sure why the score is so high considering what he wrote”?  Gamezebo’s review of Temple Run 2 is probably going to be one of those reviews.  Because regardless of the nit-picking and the gripes that you’ll read in the next 700 or so words, we’re still talking about Temple Run here, and that’s an experience that’s great no matter how you slice it.

Sequels generally have two directions they can go; try something new, or play it safe and give the audience more of what they already love.  Temple Run 2 is a title that strongly embraces this second philosophy.  There may be plenty of new elements throughout the game, but when you pick it up to play, what you’ll find is a game that feels almost identical to its predecessor.

If you somehow haven’t played the original, the shtick goes like this: Temple Run is an endless runner where you swipe left and right to turn and explore different paths.  You also swipe up and down to jump and slide past obstacles, and tilt to collect coins and survive along ledges.  Stumble too often and some man-eating monkeys will make you their supper.  Turn too late and you’ll go careening off the edge.  And Temple Run 2?  It’s exactly the same thing.

Still, that’s not to discount the new elements that are in the game.  Joe Dangerous has been given a new temple to run through, and it’s one that’s filled with daring heights and deadly obstacles.  Players will need to jump up to grab ziplines, avoid giant spinning spikes in the ground, and even tilt their way through minecart segments.  Having said that, these new elements play exactly like the old ones – even if you are on a zipline or in a minecart. 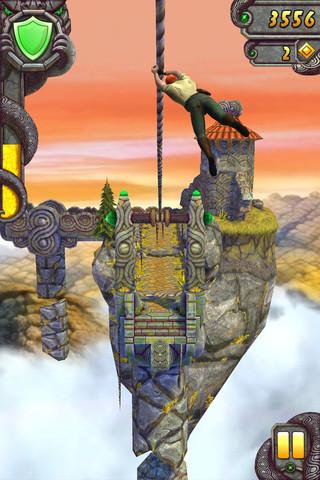 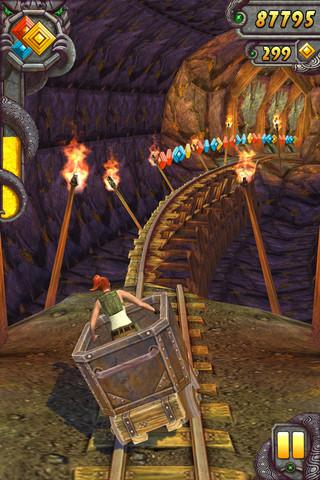 The game has also been given a bit of a visual makeover, too.  Character models look better, environments are more detailed -everything impresses just a little bit more than it did in the original.  Combine that with more upgrades, achievements that are tied to a levelling system, and a new gems currency that you can use to buy a second chance whenever you die, and you’ve got a product that improves upon the original in just about every way – if only slightly.

That said, there are a few things missing in this sequel that are sorely missed.  Seeing your friends’ high scores are you ran past them was always a great feeling in Temple Run, but that’s gone here.  Also missing is support for the iCade.  The first Temple Run not only offered iCade support, but might have been the single best game on the device.  As a big iCade advocate myself, not being able to play Temple Run 2 on it is a huge let down.

The biggest disappointment, though, is simply in how safe Imangi Studios decided to play it with their sequel.  There are no big shifts in gameplay.  There are no buzzworthy changes.  At best, you can sum it up as “it’s like Temple Run, but a little bit better.”

If you were to pit Temple Run, Temple Run Brave and Temple Run 2 against each other, Temple Run 2 would definitely come out on top – but the play-it-safe improvements don’t really do enough to make Temple Run 2 stand out in a sea of games inspired by the original.  If anything, the content we’re seeing here would have made an admirable update to the original Temple Run. But as a standalone release? Temple Run 2 just doesn’t do enough to distinguish itself from its predecessor.