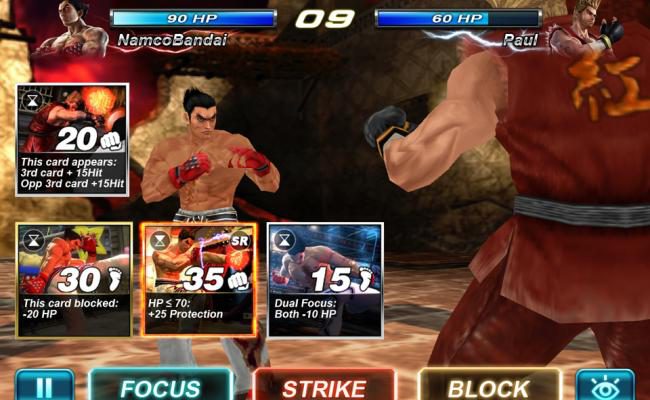 Tekken Card Tournament may not be perfect, but it’s a breath of fresh air in a genre of lookalike card games

I’ve played a lot of CCG battle games, so you can trust me when I say that most are the same old, same old – collect virtual cards, upgrade them and then “battle” other players by comparing yours to theirs to see who has the bigger number. It’s a genre that has lizard-brain appeal to the obsessive-compulsive collector gene in all of us, but as far as actual gameplay goes it tends to be less than impressive. Tekken Card Tournament takes the opposite approach: The collecting part isn’t great, but there’s some real gaming to be found inside and it’s not too bad at all.

You begin Tekken Card Tournament by selecting one of the famous Tekken fighters to serve as your avatar, after which you’re given a starting deck based on that character to get you going. There are two types of cards: Attack cards, which come in four grades from simple, low-damage attacks to hard-hitting strikes with special bonus effects, and the much rarer Power cards that provide things like hit point boosts or extra-special effects at the beginning of a match. You can collect every card in the game and have a separate deck for every character, but a deck must contain 15 Attacks cards, no more and no less, plus a maximum of one optional Power card to be eligible for use in competition.

The card collecting system isn’t very robust, with relatively weak sorting options – you can filter cards by grade, but that’s about the extent of it – and art that’s true to the original arcade games but otherwise relatively spartan and unremarkable. And unlike most CCGs, the cards in Tekken Card Tournament come very slowly. They can be acquired from within the game individually or in small booster packs with gold or credits earned in combat or purchased with real money, but the cost of buying and fusing cards is so high compared to the stingy amounts of currency the game doles out that progress is very slow if you’re not willing to pay. The ultimate goal is to tie the game into real-world trading cards, set for release this summer, with QR codes that can be scanned into your virtual collection. By making their in-game acquisition relatively difficult, the idea, one would assume, is to encourage real-world, real-money purchases.

Where it makes up for that is in the battles, either against the computer or other players, which require not only a good deck but also a good strategy if you’re going to succeed. Battles are turn-based, and in each turn you can perform one of three moves: Focus, which adds a new card to your hand, Strike, which attacks your opponent with all the cards currently in your hand, or Block, which blocks the effect of the first two cards in your opponent’s hand if they Strike. You can have up to five cards in your hand at one time, but you can attack with as little as one. 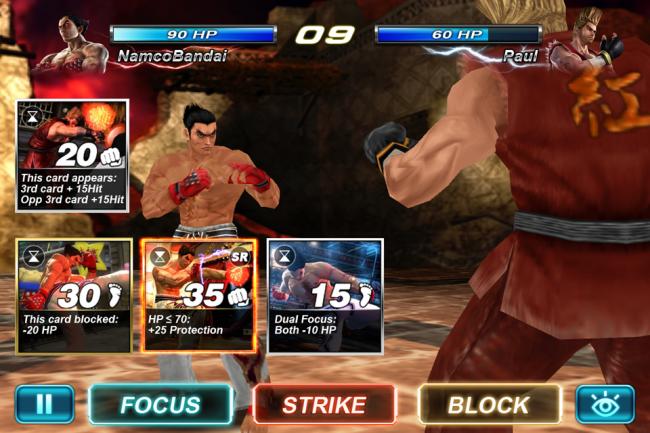 It’s a bit like Rock, Paper, Scissors, except that your attacks can be blunted by good timing (or good fortune) and making the wrong move at the wrong time gets you a virtual sock in the digital chops. Making things even more interesting is that each character has a unique fighting style reflected by their cards; some are heavy on special powers, while others are more about the raw numbers. And it’s all reflected in glorious 3D action lifted straight from the classic Tekken fighting game, complete with multiple angles on the action and slo-mo knockouts.

The “Arcade” fights against the AI are fun but the real-time brawls with your fellow players are the real attraction. They work exactly the same as the regular contests, with the important distinction that humans tend to be far more devious and tougher to beat than computers. The matchmaking system will present you with opponents it rates at a skill level similar to your own, or you can just leap in and hope for the best with the “quick fight” option. Like most CCGs, you’re forced to take breaks after five successive fights to recharge your stamina, and although you can continue to fight for fun, you won’t earn any gold or experience for your troubles until you rest. 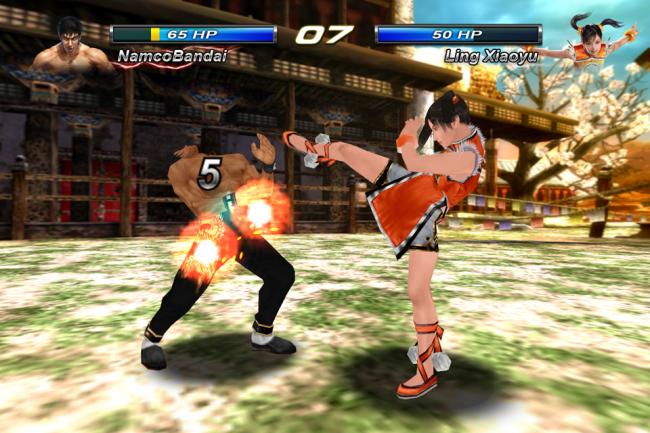 Tekken Card Tournament is experiencing some teething pains at the moment – PvP matchmaking was disabled over the weekend to give the developers a chance to compensate for the overwhelming demand, and in-app purchases remain unavailable at the time of writing – but even so, it’s a lot of fun.  The collection component may leave conventional CCG fans cold but the strategy aspect, while simple, works well and can result in some very intense and exciting battles. In fact, I’d go so far as to say that calling it a CCG is a bit unfair. It’s a strategy game, plain and simple, and a pretty good one, too.