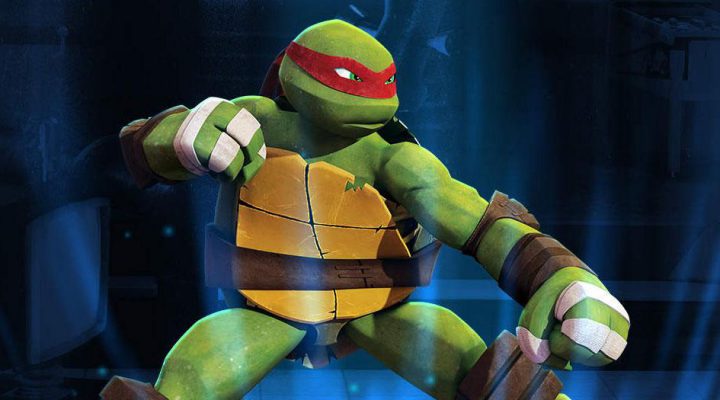 Impressive character roster and plenty of flavor from the animated series.

Nice synergy with toys, movies will pay off for diehard fans.

Not many game modes.

Takes a while to earn and advance characters.

IAPs definitely on the expensive side.

Some brands are simply timeless, and Teenage Mutant Ninja Turtles is one of those. For fans of the current Nickelodeon series, Teenage Mutant Ninja Turtles: Legends is exactly what you’ve been waiting for: a turn-based blast of fun that features tons of characters from the show. For everyone else, it’s going to be a matter of whether there are enough toppings on this particular mobile game pizza.

Sorry, I reached for that analogy just a tad, but it will make sense in a bit. Ludia and Nickelodeon have definitely made this game feel as authentic as possible. One of the true delights of Teenage Mutant Ninja Turtles: Legends is seeing just how many characters made it into the mix, including everything like obvious choices like the Turtles themselves, Casey Jones and April O’Neil to mutant foes like Snakeweed, Pizza Face and The Creep. 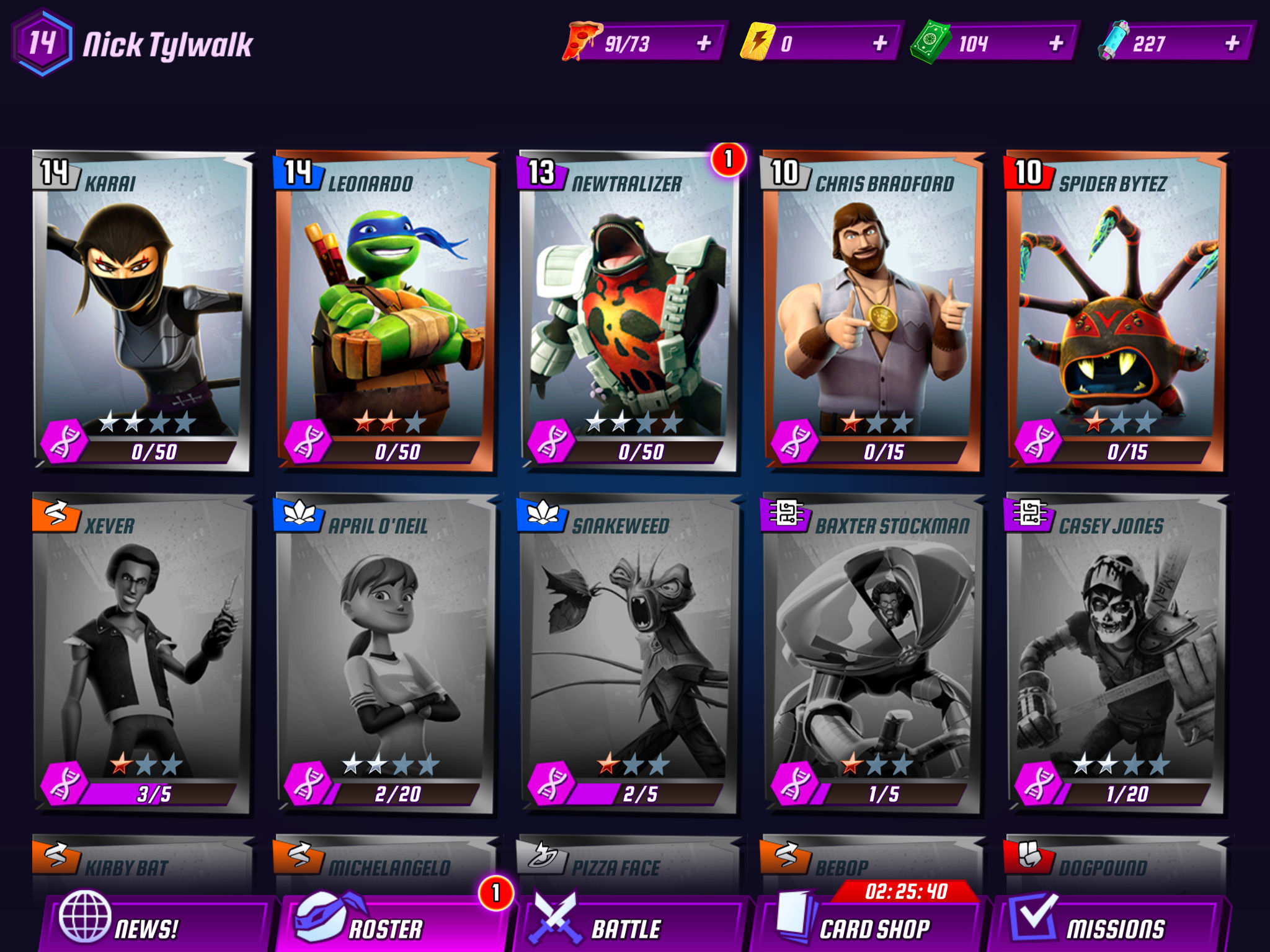 Where this game separates itself from other turn-based tactical battle games is that there’s a genuine narrative, one that gets players off and running with Leonardo and some unlikely partners. The gameplay is easy to pick up, with characters acting in sequence depending on their speed ratings and some other factors. Low level heroes and villains tend to only have one simple attack to use when it’s their turn, though the strategic possibilities expand once characters are ranked and leveled up.

The problem is that it takes a while to do that, as the game requires certain amounts of DNA to be collected in order to bump a character up to the next tier. Doing so requires runs back through completed levels on Hard difficulty, and even then there’s only a chance to grab a unit of DNA. As a result, it’s easy to end up with multiple characters temporarily maxed out with no choice but to grind back through those Hard levels.

It’s also just as common to run out of pizza, which is appropriately used as the game’s energy mechanic. Logging in several times a day helps since Legends is generous in handing out free card packs every few hours, which can contain pizza, mutagen (the basic currency), advancement items and DNA. There are card packs available for purchase too, but the cheapest one is a hard to believe $9.99, and the store doesn’t do a good job — or any job, really — of explaining what that real money might yield.

Much more promising is the way that codes from the inside of Teenage Mutant Ninja Turtles action figures can be redeemed for in-game goodies. At launch, there was also an event that coincided with the release of the Teenage Mutant Ninja Turtles: Out of the Shadows movie, rewarding people who are all-around TMNT fans. Those same folks will be the ones to most fully appreciate the way the graphics and animations bring the Nickelodeon show to life. Even the way the Turtles run from one encounter to the next is instantly recognizable. 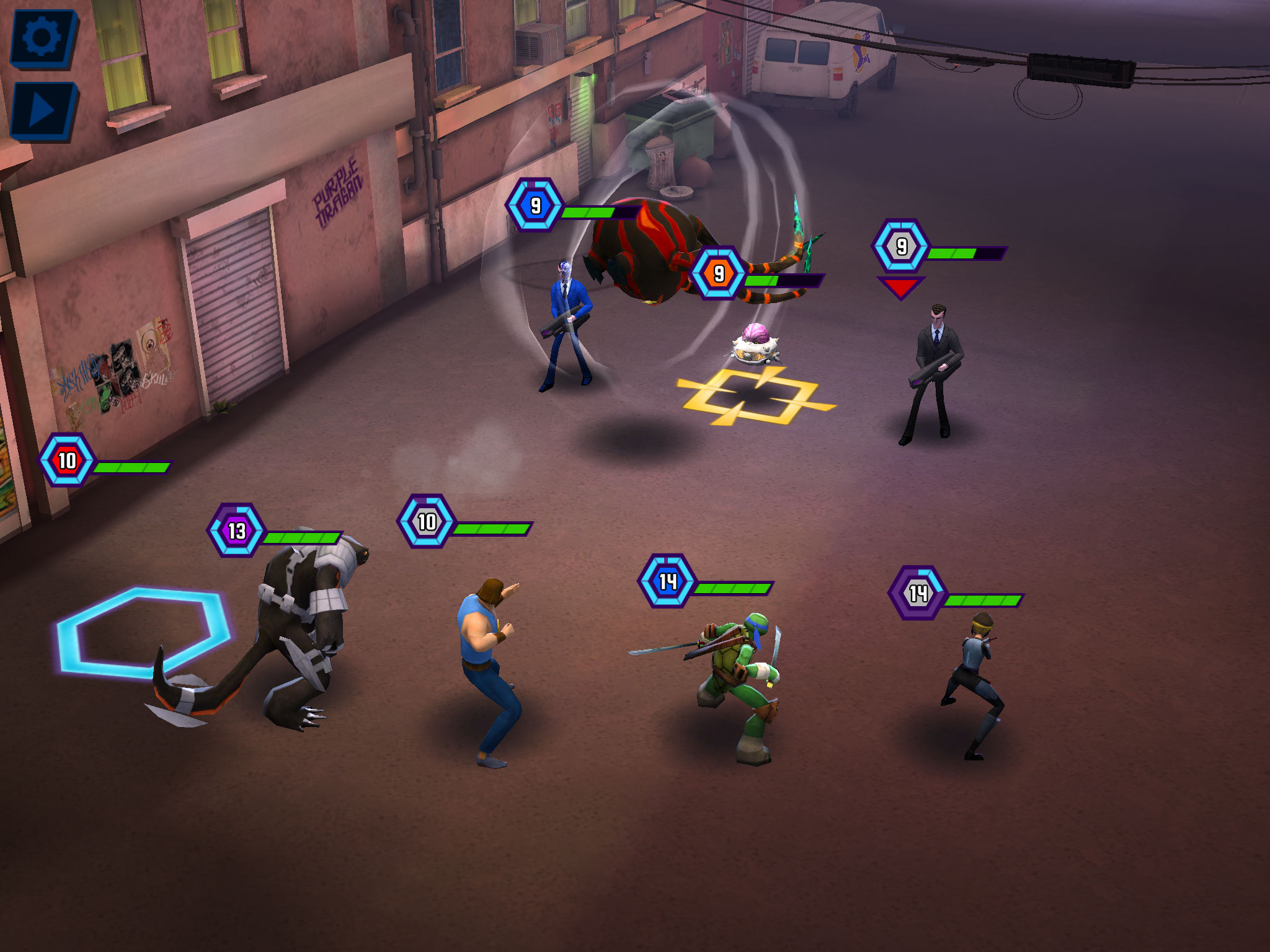 Other than the impressive roster, though, what’s missing is more content. The seven story chapters are fine, but then what? It’s genuinely surprising that there isn’t even an asynchronous PvP mode to dive into, and when compared to similar titles like Star Wars: Galaxy of Heroes, this game feels like a large one-topping pie sitting in the window next to a fully loaded house special.

Told you that analogy would pay off eventually. Teenage Mutant Ninja Turtles: Legends should be commended for doing the franchise justice and for its accessible fun, but it’s got potential that will probably only be truly reached through future updates. Here’s hoping it gets them.