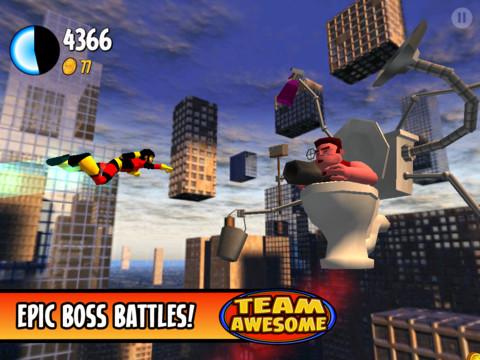 If a meteor crashed into Earth and granted superpowers to much of the populace, you would think that petty criminals would give up the breaking and plying trade. Not so, and that’s part of the reason why the cast of Team Awesome has decided to utilize their newfound powers for the good of humanity. Someone’s got to knock car thieves into the sun, and it sure isn’t going to be that boy scout Superman.

Team Awesome is an endless runner that’s draped with a unique personality. You don’t just pound the sidewalk with your feet; you also fly, break through barriers, knock over bad guys, and help old grannies home by literally punching them back into their yards (don’t worry. They’re OK).

Not even superheroes can go on forever, and in order to keep on doing good, you need to collect the blue shards of “Awesonium” that pepper each level. Make sure to avoid the red bits of “Dullonium,” though, as they sap your superhero energy and give you a craving for mayo on white.

There are several episodes to work through, all laid out like comic book issues. When you begin an episode, you’re presented with a mission list. You might need to collect 150 coins in one session, “help” five old ladies get home, break through ten walls, and so on.

What makes Team Awesome fun is that you need to get a feel for the layout of each level and move accordingly if you want to succeed at your tasks. Air vents fling you way up in the air where you’re bound to find tons of coins, but flying takes up more Awesonium—and you risk missing opportunities to fulfill your necessary tasks on the ground. Also, hover-truck traffic is pretty dense up in the air.

Team Awesome is also pretty funny at times. You’ll probably recognize the narrator immediately (Jon St John, AKA Duke Nukem), but it’s the subtle touches that make you grin. Most levels begin with you breaking out of a wall—much to the chagrin of the workers that are constantly trying to repair it (until they just give up and stand aside). In one mission, you need to knock aside fifteen breakdancers. Why are there breakdancers in the middle of the street? Well, there’s a big sign at the start of the level announcing a breakdancing contest. Either way, those shenanigans aren’t happening on your watch!

The graphics and animation in Team Awesome are attractive, and the city alternates between day and night. The coins you collect can be used to upgrade your powers and unlock new heroes, though you should also keep in mind that opening up new levels requires a small fee.

If you’ve utterly had it with endless runners, Team Awesome might not help you change your mind. You’re still essentially running on a single path and sticking it to bad guys and objects. But if you just want to play a game that does something interesting and fun with the genre, go ahead and pull on your tights.