Home / Reviews / Tappily Ever After Review 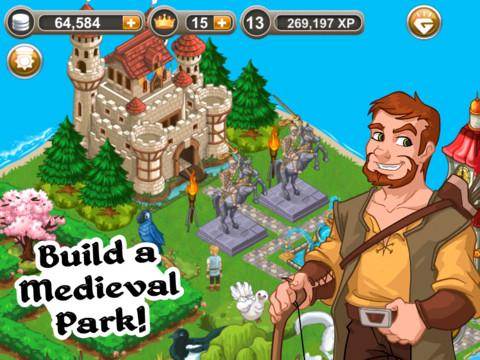 Pocket Gems has released a “new” game for iOS called Tappily Ever After. Another simulation-style app, the real name should just be Tap Zoo 3; or maybe even Tap Zoo 2.5. Consisting of virtually the exact formula of its Tap Zoo predecessors, no significant innovation enters into this game and consists only of a new aesthetic and loose storytelling. Along with this, little thought appears to have been placed into the game’s economy, as content costs feel random at best.

Hot on the heels of Tap Zoo 2, Tappily Ever After takes a bit of a storybook turn in terms of its overall frame work. The long and short of it is that a fairy tale wedding is about to commence when Princess Primrose is spirited away by an evil figure that takes over the castle. Complete with hand-drawn illustrations and a children’s storybook style of prose, it is actually a decent concept.

The big problem is that this story is used to create arbitrary quests for the player to try and complete. Working like almost all other quests in this app genre, they’re simple tasks like placing a decorative item or animal. It’s at this point that players realize that Tappily Ever After is a song and dance they’ve all heard before; that all the shiny new paint is just masking a virtual zoo.

Working identically to Tap Zoo 2, players purchase animals to place around their virtual space and earn periodic income from them. Additionally, once a second is purchased. more can be bred in a nursery (one at a time). And as experience is gained, this can be repeated with more lucrative creatures. Even the cross-breeding and mixing of animal parts together to create new species has been preserved, adding a bit of longevity to the title. 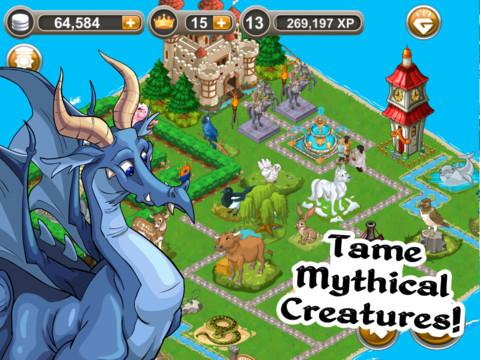 Such is certainly needed, too, for the content of Tappily Ever After is surprisingly limited. In terms of animals, there are only 12 in total to purchase, with half of them costing the virtual currency of “Crowns.” It’s not entirely unexpected, but in some cases, the price is insane. Several animals cost around $5 or more (for all intents and purposes), and in the worst case scenario, unlocking features such as breeding more than one animal at time requires about a $35 expenditure!

Pricing for regular items seems a bit off as well. While nothing is terribly unaffordable, once players have their zoo going it just feels… random. For example, a chameleon costs 620 Silver while a dolphin costs half of that. Meanwhile, a section hedge costs 3,000 Silver, a stone castle wall costs 50, and a sidewalk chunk 500. It just makes no sense. Heck, even the physical space some objects take up feels bizarre, with birds taking up more space than some buildings.

Why is this a problem? Because it pretty much acts as proof that Pocket Gems did not put much effort into Tappily Ever After. Granted, the new artwork looks fine, and the illustrations are fantastic, but the gameplay is sorely lacking. Yes, it’s successful for Tap Zoo, but that’s all that Tappily Ever After is: Tap Zoo. Other than a new coat of paint, there is nothing unique here. It is merely a copy and pasted title with little thought to even the economy. Even the various Story games from TeamLava have balanced currency costs for all its game items. Taking everything into consideration, the new Pocket Gems title isn’t “bad” per say. If users like Tap Zoo and don’t mind the lack of innovation, then this game will be enjoyable. Even so, it’s a startling disappointment in general.