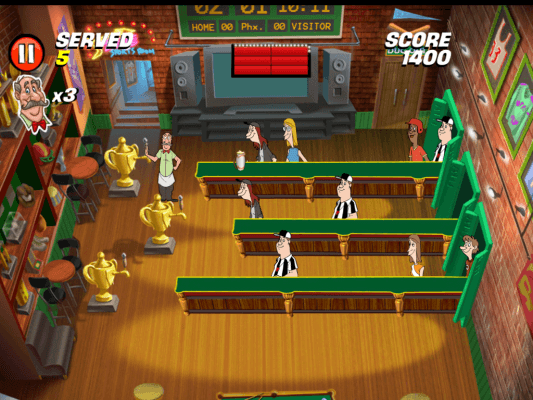 Tapper World Tour offers up a frosty mug of deliciousness, but like any good drink, the flavor can get stale after a while

As a child of the 80’s, I remember a lot of things fondly. Classic arcade games, for example. Or the films of Don Bluth. Much to my chagrin, Warner Bros has decided to combine these two particularly delightful elements of my youth into one snappy little package with the release of Tapper World Tour.

A modern re-working of the nearly 30 year old arcade game Tapper, Tapper World Tour places players in the role of bartender as they frantically try to satiate the thirst of a seemingly endless onslaught of customers. Working at multiple bars, players will jump from counter to counter as they try to serve every customer while catching empty glasses before they break on the floor and collecting tips as they appear on the bar. If you’re a fan of the original Tapper, you’re going to know exactly what to expect here.

What you won’t be expecting, however, are the delightful visuals. Rather than employing a retro pixelated look or bringing in some generic art major to bang out a few quick character sketches, the art in Tapper World Tour was handled by none other than legendary animator Don Bluth. If you don’t know the name (and shame on you if you don’t) you certainly know his work. The Secret of NIMH, An American Tail – even the arcade classic Dragon’s Lair all sprang from the hand and mind of Mr. Bluth.

And while Bluth’s contributions may feel a little… basic when compared with his work in major motion pictures, there’s no denying his unique style has touched every character in the game. Some customers even have a touch of earlier Disney-era Bluth, with the occasional barfly looking like the not-so-distant cousin of Pongo’s owner in 101 Dalmatians. As a fan of classic animation, it’s hard to not be tickled pink by Bluth’s return to video games – even if it’s only in the slightest of ways.

While Bluth’s contributions aren’t the only new element in Tapper World Tour, the rest are definitely more evolution than revolution. While the original Tapper featured four different bars, World Tour features eleven. Elements like tips and glass-catching, both of which made sure players were constantly on their toes in the original, have been expanded to include customers with specific drink orders in the later levels.

On the less thrilling side of things, the developers have also included some mini-games that could quickly lull any player to sleep. Little more than themed variations on three card monte, these offer no real payoff and merely serve as a quick and unnecessary break from the action.

Like many classic games revisited on the iPhone and iPad, there’s also the issue of repetition. Yes the gameplay is both crazy fast and crazy fun, but it’s also the same thing level after level. If you reach a point where you can’t keep up (and you will), there’s a good chance you’ll simply put Tapper down and never return. Once you’ve had your fill, you’ve had your fill.

With two modes, more than 100 levels, and the fastest tapping action we’ve seen on the App Store so far, Tapper World Tour manages to serve up a frosty and delicious drink that old school gamers will be happy to devour. Like any tasty drink though, the more you consume, the quicker you’ll tire of it.